Update: People in the areas predicted to be affected can breathe a little sigh of relief as IMD downgraded Cyclone 'Jal' to "severe cyclone" from a "very severe cyclone." The cyclone is likely to lose strength further though as a precautionary warning people are to remain relief camps. (18.03 IST)

Strange is the nature. From a Super-Cyclone, Jal evaporated into thankfully a no-show.  I suppose the government holiday tomorrow still stands!

We in India have been lucky so far that landfalls have been very weak, avoiding a disaster. Jal only took 30 lives, damaged some thatched housing, some standing rice crops and some flooding. It could have been worse, much worse.

Another low has developed in the Bay of Bengal. Can we be still lucky? (20.02 IST) 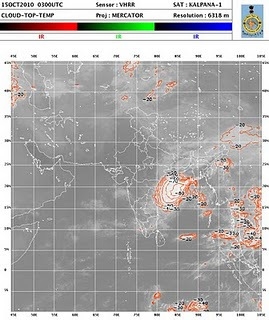 Jal (water) though lying stationary at the moment, is expected to hit southeast Chennai and Nellore, Thiruvallur, Puducherry and Kancheepuram. Tropical Cyclone Jal will approach the southeastern coast of India as a Category 1 cyclone. A storm surge about 1-2 metres above the astronomical tide may inundate the low lying areas.

It will make landfall north of Sri Lanka by Sunday creating widespread heavy rain along with strong winds that may cause significant damage. The higher terrain of this region will cause the cyclone to weaken in terms of its damaging winds. Cyclone “Jal” which is currently 600 Km away from Jaffna is expected to make landfall in Chennai tomorrow reducing its effects on Sri Lanka. The India Meteorological Department (IMD) Saturday issued cyclone warning in north Tamil Nadu and south Andhra Pradesh. 'Jal' lay centred over southwest Bay of Bengal, some 650 km from Chennai and 750 km southeast of Nellore, Saturday evening. National Disaster Response Force (NDRF) stationed near Chennai and have also moved NDRF from Vijayawada to Nellore and inundation maps would be ready by tomorrow morning.
According to Times of India:

The India Meteorological Department has a network of Doppler Weather Radars (DWR) at Chennai, Machhilipattanam and Vishakhapatanam which could accurately forecast the movement of the weather system once it nears the coast. DWRs have a range of upto 450 kms."

Heavy rains over the last one week under the impact of low pressure and vigorous northeast monsoon in the state have claimed 37 lives in coastal Andhra Pradesh and damaged crops in nearly 300,000 hectares of land, according to officials.  East Godavari District Collector Ravi Chandra was quoted by the media admitting the sea water has entered houses in Pallepalem in Antharvedi mandal. However, there are no reports of any human casualties.

Extensive damage to thatched roofs and huts, minor damage to power and communication lines due to uprooting of large avenue trees and flooding of escape routes.

Meanwhile Cyclone Tomas has roared northward between Haiti and Cuba, sending bands of torrential rain and thunderstorms through the earthquake-ravaged nation. If it hits Haiti, it will be a disaster.