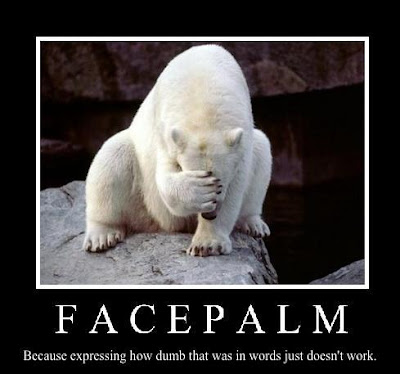 Future generations will wonder in bemused amazement that the early 21st century’s developed world went into hysterical panic over a globally averaged temperature increase of a few tenths of a degree, and, on the basis of gross exaggerations of highly uncertain computer projections combined into implausible chains of inference, proceeded to contemplate a roll-back of the industrial age.”

This is a quote from Dr. Richard Lindzen. He is one of the world’s most respected climatologists, a Massachusetts Institute of Technology Professor of Atmospheric Science. Global warming hysteria is on the retreat. Each October 26th is celebrated as a day of remembrance that the fight against pseudo-science must go on, and we must be ever vigilant. On this occasion, we bring you this excellent posting by Anthony Watts of the blog, WUWT.


For the last 20 years politicians, jets setting bureaucrats and vested interests have been plotting how to make Climate Fools of the western world, taxing industry and consumers to fund green schemes, carbon speculators and international wealth redistribution. The fightback by sceptical scientists and public was greatly boosted on the first Climate Fools Day when, in October 2008, British politicians passed with little dissent “The Climate Change Bill” a piece of legislation that future generations will come to accept was “the most absurd Bill that this Parliament has ever had to examine”. Since then, sceptics all over the world have exposed the lack of evidence, the manipulation of data, the misuse of scientific process, the corruption of vested interests and the powerful influence of natural factors in climate cycles. Despite the now discredited projections of dangerous global warming, the globe itself has continued its normal weather defining cycles such as El Nino, La Nina, the Pacific Oscillations, the powerful solar cycles and the massive ebb and flow of oceans and atmosphere. On a longer time scale there is no evidence that the globe’s long history of recurrent ice ages and violent episodes of volcanic and earthquake activity have suddenly ceased. Unfortunately, a whole generation of Climate Fools will have to be rooted out of our parliaments before Climate Sense reigns again. We will then see the massive flood of community resources currently being wasted on windmills, solar toys, alarmist junkets, silly subsidies and climate bureaucracy will be more sensibly directed towards preparation for coping with the real natural cycles of heat and cold, floods and droughts, cyclones and earthquakes, vulcanism and ice ages. We will then regret the destruction of industry and wastage of real energy opportunities now taking place.

Posted by Rajan Alexander at 10:38 AM No comments:

Mount Merapi - Threatening to Erupt. Can it's impact add to the Global Cooling underway? 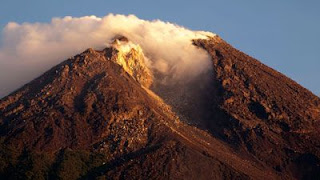 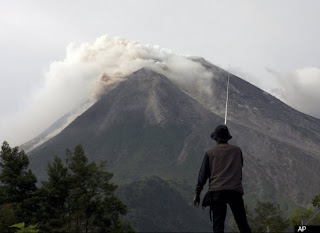 Finally Mount Merapi erupted at 5.02pm (local time) Tuesday sending clouds of ash into the atmosphere, causing burn injuries to at least 13 people. Three explosions around 1800 (1100 GMT) spewing volcanic material as high as 1.5km (one mile) and sending heat clouds down the slopes.

Television visuals showed fallen ash from the volcano as far away as 15km at evacuation centres. The peak of Mount Merapi was clouded with smoke making it impossible to see if lava was spewing out, but that ash had started raining down on frightened residents.

"This is an initial phase of an eruption," Subandrio, head of the Volcanic Technology Development and Research Centre in Yogyakarta was quoted by the media.

There are fears that the current activity could foreshadow a much more destructive explosion in the coming weeks or months, though it is possible, too, that the volcano will settle back down after a slow, long period of letting off steam.

"Today's eruption released heat clouds of gas and ash down the slopes for about two hours. We cannot tell you how far the searing clouds went down on the slopes because it's dark. 7.5 million cubic meters of volcanic material was the remnants from the 1911 eruption and prone to collapse under magma pressure.If the 1911 dome is pushed by magma, the domes created during the 1997 and 2006 eruptions will also collapse.” 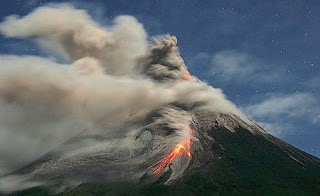 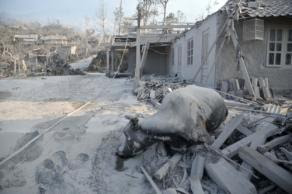 A three-month-old baby died after experiencing respiratory problems after Indonesia's most volatile volcano Mount Merapi. Private MetroTV reported that another baby died when a mother ran in panic after the eruption started. Its report cited a local doctor and showed the mother weeping as the baby was covered with white blanket at a hospital. These two babies are among 25 officially admitted dead.One rescuer, Christian Awuy, told the BBC that he feared up to 50 could have been killed. The Jakarta-based Vivanews.com news website said one of its reporters was among the dead.29,000 people had fled to temporary shelters around the nearby city of Yogyakarta, but there were fears for the fate of thousands more who had refused to budge.

The man known as the volcano's spiritual gatekeeper, Mbah or grandfather Marijan, was among the dead. For many Javanese, Merapi is a sacred site. Maridjan, revered by locals as a man who was believed to be able predict the behaviour of the volcano, had refused to leave his house. He was found buried him in a blanket of choking ash. Local media reports said his body was found in his house in a position of prayer, suggesting the old gatekeeper had struggled to the end to soothe the violent energies in the mountain's core. In the 2006 eruption, Marijan also refused to follow orders to evacuate, saying it was his traditional and spiritual duty to stay. His rites were a blend of Islamic and Java's pre-Islamic Hindu-Buddhist periods.

Several houses and cattle have been burned by the hot cloud from the mountain. All the houses are blanketed in ash, completely white. The leaves have been burned off the trees. The search was focused on two villages -- Kinahrejo and Turgo -- located close to the Mount Merapi volcano in the crowded Central Java province, where at least 15 burnt bodies had been found, a rescue official said.

Children’s charity Plan International has been stockpiling supplies in Jakarta, dispatching blankets and sleeping mats for 4,000 people to arrive. The Indonesian government is trying to find accommodation and basic supplies for more than 19,000 people displaced by an eruption at Mount Merapi. SurfAid International is launching an emergency appeal in response to the earthquake and tsunami. The nonprofit humanitarian aid organization with offices in the USA, Indonesia, Australia and New Zealand is conducting search, assessment and response operations.

While volcanic plumes can lead to lower global temperatures, the phenomenon, though sometimes dramatic, is usually short-lived. The altitude of the ash from the current Merapi blast is 55,000 feet,  according to Australia's Volcanic Ash Centre. This is comparable to the Mount Eyjafjallajokull eruption in Iceland in April but considerably lower than the 1991 Mount Pinatubo blast in the Philippines, which sent ash 78,740 feet into the atmosphere and temporarily cooled the world

Indonesia has more active volcanoes than any country on Earth. There are 129 active volcanoes to watch in Indonesia, which is spread across 17,500 islands and is prone to eruptions and earthquakes because of its location within the so-called - a series of fault lines stretching from the Western Hemisphere through Japan and Southeast Asia.

Indonesia has more active volcanoes than any country on Earth. There are 129 active volcanoes to watch in Indonesia, which is spread across 17,500 islands and is prone to eruptions and earthquakes because of its location within the so-called "Ring of Fire" - a series of fault lines stretching from the Western Hemisphere through Japan and Southeast Asia. 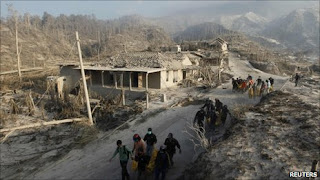 Mount Merapi is the most active volcano in the country, and has had at least twelve major eruptions that killed people. In Indonesian,  Merapi means “Mountain of Fire”. The volcano is considered sacred and every year a priest climbs to the top to make an offering. The 2,900 m-high volcano lies 26km north of the town of Yogyakarta in the centre of Java. The Volcanology and Geological Disaster Mitigation Center (PVMBG) has raised the status of top alert for eruption. The volcano’s deformation has reached 1.7 meter and the energy to be released could pose a serious threat."The magma has been pushed upwards due to the escalating seismic energy and it's about a kilometre (mile) below the crater," government volcanologist Surono said. If it erupts, it can threaten the population living within 6 to 7 km of its radius. The most dangerous part of this volcano is very hot fumes released by the mountain that can reach up to 500 degrees Celsius and they have a high speed of up to 200 km per hour.  The deposition zone shows an area predicted to be actively accumulating ashes and other volcanic materials, as a consequence of the volcanic materials flow from Mount Merapi.  It is these fumes or clouds that kill people and animals. 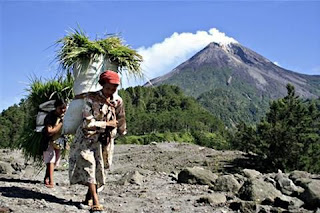 At the times of eruption, if regions around Mount Merapi experience heavy rainfalls, as it are the case currently, it may prompt the formation of an avalanche of cold lava. If this happens, many rivers will be polluted by the cold lava. The rivers at risk include Krasak River (Kali Krasak), Gendol River (Kali Gendol), and Boyong River (Kali Boyong). The Government of Indonesia is therefore calling for people to be be evacuated to safer locations before this, taking no chances. But the people themselves are hesitant to move. Apparently, they are waiting for for their traditional "communicator" with the volcano, to give the go-ahead to move. Till now, no signal has come from him.

Seismic activity has escalated dramatically in recent days at Mount Merapi with increasing lava spurts and about 500 volcanic earthquakes recorded over the weekend. The mountain last erupted in 2006, when it sent an avalanche of blistering gases and rock fragments racing down the mountain that killed two people. In a 1994 eruption, 70 people were killed in an eruption when the volcano's lava dome collapsed. The volcano killed 1,300 people in 1930 causing an ash rain that reached as far as Malang and Madura Island in East Java. 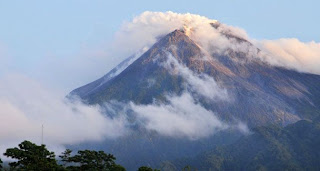 Currently, Mount Merapi's cone has been expanding, indicating a build-up of high-pressure gases. Based on observations conducted by 15 vulcanologists, experts feel that the mountain’s activity had tripled compared to the previous eruptions in 1997, 2001 and 2006. The volcano’s deformation has reached 1.7 meter and the energy to be released could pose a serious threat. This has prompted some experts to predict that the amount of material thrown up by its eruption this time could be higher than the 14 million cubic meters thrown up in 2006.If this happens, then Mount Merapi's possible effect on cooling global temperatures need to be watched.

It is  to be  noted  that  people in the area do not share the gloom and doom predicted by experts. Though an estimated 40,000 people live in the shadow of the volcano, only 3,700 people have moved to makeshift camps.

“When Merapi coughs up smoke, then I’ll go down the mountain to evacuate” one resident was quoted by the press as saying.

"We believe Merapi will erupt explosively, as it did in 1930, and not just spew gas like in 2006. We're looking at a potentially huge eruption, bigger than anything we've seen in years. Merapi tends to form a lava dome before it erupts, but our data shows there was an explosive eruption without prior formation of a dome".

It is thus interesting to also watch who is right with their predictions in the end.

Posted by Rajan Alexander at 9:20 AM No comments: