Tropical Cyclone Yasi has been downgraded to a category three cyclone, but with wind gusts of around 205km/h at its core, remains "very destructive", Australia's Bureau of Meteorology says. Australia's Bureau of Meteorology downgraded Yasi to a Category 3 at 4.48am EST (7.48am NZT) and says it is expected to weaken. The cyclone reached a category 5 last night.

"Preliminary information given to police suggests there is widespread damage across north Queensland but there have been no reported injuries or deaths at this time," a Queensland police message on facebook read.

Sugar futures surged to a 30-year high on mounting concern that global supplies will trail demand following crop damage in Australia and India, two of the world’s leading producers.

Cyclone Yasi has crossed the coast of Australia’s Queensland state. The storm may cause crop losses of as much as $505 million, a grower group said. Output from India may be less than predicted after heavy rains, a producer organization said. Prices have more than doubled since the end of June. 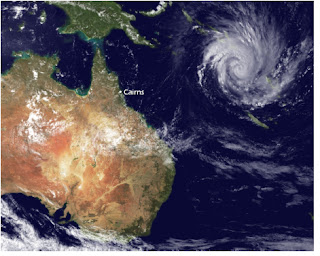 Though climate sceptic and legendary weatherman Piers Corbyn of Weather Action got the Queensland floods right, he was mocked by global warmists for his prediction of a tropical cyclone.  No more. It is Corbyn that’s now having the last laugh. Category 5, Cyclone, Yasi is all set to ram into Queensland.  Yasi is the strongest and biggest cyclone experienced in Australia since 1918, and its accompanying storm surges of up to 7m above high tide anticipated at Cardwell have forced the evacuation of 35,000 people from Townsville to Cairns.Cyclone Yasi will strike Australia’s Queensland state, recovering from destructive floods last month, later today and will be “life-threatening,” according to the state’s Premier Anna Bligh, bringing wind gusts of up to 290 kilometers (180 miles) an hour. Rio Tinto Group and Xstrata Plc shut coal mines and the storm is expected to damage sugarcane and banana crops.  So strong its impact, Professor Peter Skinner, Queensland president of the Australian Institute of Architects, said house roofs would be wrenched off by uplift forces similar to the wind that runs over the wing of an aircraft.Coal and zinc mines are shut and at least 32 coal ships are steaming out to sea, as sugarcane and banana farmers in northeastern Australia brace for the forecast landfall later today of Tropical Cyclone Yasi. Premier Anna Bligh has warned north Queensland residents that it is too late to evacuate ahead of "catastrophic" Cyclone Yasi. Wind gusts of up to 125 kilometres per hour have already begun buffeting Cairns and Townsville as Yasi closes in on the coast. According to the Bureau of Meteorology (BoM), Australia, Cyclone Yasi, forecast to be one of the strongest ever to hit Australia, will likely be followed by more cyclones as La Nina boosts the number of tropical storms. “We are still a couple of weeks off what is historically the peak of the tropical cyclone season, so we would expect more cyclones to occur between now and winter,” David Jones, head of climate monitoring and prediction at the bureau, said from Melbourne. Eight cyclones have occurred in the Australian region so far, compared with 12 on average for a season, he said. La Nina events historically bring floods and an increase in cyclones during the Australian storm season from November to April. As usual, you probably find science and physics illiterates in Greenpeace, WWF, Oxfam, Christian Aid etc raising the spectre of global warming. For these kinds, Simon at Australian Climate Madness reminds that:

“Tropical cyclone Mahina hit on 4 March 1899. It was a Category 5 cyclone, the most powerful of the tropical cyclone severity categories. In addition, Mahina was perhaps one of the most intense cyclones ever observed in the Southern Hemisphere and almost certainly the most intense cyclone ever observed off the East Coast of Australia in living memory. Mahina was named by Government Meteorologist for Queensland Clement Wragge, a pioneer of naming such storms.”

Posted by Rajan Alexander at 9:27 AM