Last month, Rajendra Pachauri, Chair of the Inter-governmental Panel on Climate Change (IPCC) finally conceded that disasters could not be directly linked to man-made climate change due to lack of empirical evidence (Read here)

But this normally does not stop NGOs like Greenpeace, WWF, Oxfam or ChristianAid in creating hysteria whenever a disaster strikes, even if science is not their organization's core competence. A cloudburst yesterday struck near Ramgarh in Jammu & Kashmir, details of which could be found in a Times of India article we are reproducing.

But before we do so we like to provide extracts from perhaps one of the most authoritative book on cloudbursts - Arun B. Shrestha, Suresh Das Shrestha in their study (Flash Flood Risk in the Hindu Kush-Himalayas: Causes and Management Options): 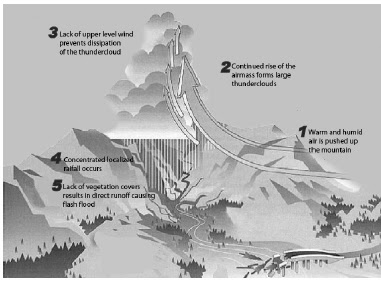 “Cloudbursts are associated with intensive heating of air masses, its rapid rising, and formation of thunderclouds. Interaction with local topography results in upward motion, especially where the atmospheric flow is perpendicular to topographic features. Particularly intense precipitation rates typically involve some connection to monsoon air masses, which are typically heavily moisture laden and warm due to tropical origin (Kelsch et al. 2001). Lack of wind aloft prevents dissipation of the thunderclouds and facilitates concentrated cloudbursts that are often localized and limited to a small area.”

Read also our archive: Leh Cloudburst: What caused it? The Most Plausible Theory 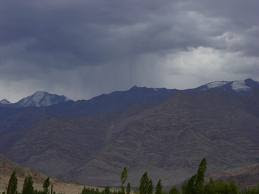 JAMMU: Three persons were feared killed, while many went missing with a dozen of vehicles buried in landslide that was triggered by lightening followed by a cloud burst in Ramgarh Bagar area near Batote here last late evening.

According to an eyewitness who informed over phone that the natural catastrophe hit the Ramgarh area near famous eating point of Bagger, about 15 kilometers from Batote, on Doda-Kishtwar National Highway 1B, at around 6.30 pm when the area was experiencing rainfall.

The occupants of the some residential houses on the hills and owners of dhabhas, other infrastructure along the National Highway 1B and vehicle operators were caught unaware when amidst rains sudden cloudburst took place in the area causing massive destruction. Due to heavy rains followed by cloud burst that triggered a mud slide which completely destroyed two kilometer road stretch of Bagar leading towards Doda from Batote. The flow of landslide took three persons and about dozen of vehicles with it towards river Chenab. Eight shops and ten kiosks (Khokhas) were also washed away during the calamity.

After receiving information, Deputy Commissioner Doda along with Superintendent of Police (SP) Doda reached on the spot. A rescue operation by police and locals under the supervision of SP Mohan Lal was also launched to search the missing people. It is stated that about six persons have been missing in the incident. With the destruction of two km road stretch the vehicular movement from both sides has been paralyzed besides cutting the Doda district from rest of the state. The identity of the missing persons is being ascertained. Senior officers of police and civil administration were camping at the site. The rescue operation was continuing till reports last came in. The rescue team was facing difficulty due to darkness.

Sources informed that for the last four hours there were torrential rains and lightening thunder which caused cloud burst on the upper reaches with the effect that two nullahs, adjacent to each other, which were leading towards road from upper reaching flooded with water which became the root cause of landslide.

This is second cloud burst in Jammu and Kashmir last one week.

Earlier, one June 2 one person was killed due to a cloudburst in Kupwara district of north Kashmir. Habibullah Mir, who was returning to his home in Vilgam area of Handwara died on his way after being caught in the natural calamity.

Pertinent to mention here that people in state especially in Leh_ladakh yet has to reconcile from the harsh and horrifying memories of the Natural calamity which left struck on August 5/6 2010 resulting in the death over 130 killed and hundreds washed away while property worth crores also was damaged.

Posted by Rajan Alexander at 10:48 PM