As Bt Cotton turns 10, observational data certifies it a Super-Flop: Part I 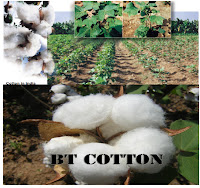 Cotton is one of the most important commercial crops cultivated in India. Commanding around 60% share in the raw material consumption basket of the Indian textile industry ,it plays a major role in sustaining the livelihood of an estimated over six million cotton farmers and over 50 million people engaged in related activities such as cotton processing and trade. Textiles in turn accounts for nearly 20% of India’s exports.

Similarly, 60 years ago, the production of cotton was completely organic and of the desi (traditional) variety. Today, 85-90% of the production is accounted by transgenic seeds, this transformation coming in just 8 years. But adoption appeared more supply driven than need based:

• Since transgenic seeds are back crossed with elite local hybrids, normal hybrids began disappearing from the market.  The increasing unavailability of the latter functioned as a powerful catalyst for speedy adoption of GM technology in the country.
•  Adoption rates really spiked in the country after the Supreme Court pegged the price of transgenic seeds to make it more affordable to farmers as compared to its prohibitive introductory prices.
• Bt introduction also coincided with global cotton prices soaring due to supply side bottlenecks - largely due to falling production in China and US, two of the world’s largest producers and exporters of cotton. Bt enabled cotton varieties that found a fit with global cotton demand.

Productivity that stood at a mere 92 kgs per hectare in 1951-52 increased with the progressive adoption of hybrid seeds till it logged around 400 kgs per hectare in 2003-04. That year can be treated as the pre-transgenic cotton’s productivity baseline in real terms as Bt’s share in area cultivated was then a mere 1% and inconsequential in impact to overall productivity of the cotton crop in the country. 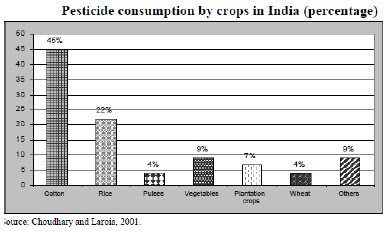 The introduction of GM seeds was justified on the grounds that poor yields were result of high pest infections that accompanied increased use of hybrids which in turn are prone to more severe pest attacks than the desi (traditional) varieties. A widely quoted statistics point out of that cotton cultivation in India which accounts for about 5 per cent of the total land under cultivation yet accounts nearly 45% per cent of all pesticide usage (Choudhary and Laroia, 2001).

Low yields meant though India had the largest hectare under cotton in the world, it came a distant third after China and the US as the leading producer globally. The cotton cultivation in India has been plagued with rising cost of cultivation, ineffective pesticides, adulterated seeds, and other inputs, leading to frequent crop failures (Bose, 2000).

Nearly 65 per cent cotton cultivation is rain dependent and subject to heavy vagaries of monsoon rains. Continuous presence of cotton in the subcontinent makes it easy for pest; diseases and other biotic stress agents to survive multiply and cause frequent epidemics (Mayee, 2002).

The cotton crop in India is in fact affected by over 145 species of insects and few species of mites. But research studies indicated that nearly 50% of all yield reduction is accounted by the bollworm complex particularly Helicoverpa armigera (Old World or American bollworm) and to a much lesser extent Pectinophora gossypiella (Pink bollworm), Earias vittella (Spotted bollworm) and E. insulana (Spiny bollworm). Annually it was estimated that 344 million dollars are spent on cotton pesticides. Bollworm control was estimated to cost farmers 235 million dollars yearly.  It was further claimed that:

“Bollworm caterpillars had become resistant to all insecticides recommended for control and none of the chemicals worked, even when mixed as cocktails at doubled concentration and despite repeated spraying of insecticides (6 to 20 times for each crop).”

In 2002 after many lengthy trials and tests, the Government of India (GoI) finally permitted the commercialization of a new variety developed by Monsanto, touted as an effective counter to bollworms and hence called Bolgard. By now, the American cotton variety became the predominant cotton variety cultivated in the country and the Bolgard was touted as an effective remedy against its principal pest - the American Bollworm.

The new variety has been designed by inserting the genes of naturally occurring aerobic bacteria in the soil called Bacillus thuringeinsis (Bt) into cotton. This bacterium produces a toxin that is lethal to the Bollworm, particularly effective against the American bollworm. Farmers in the US have traditionally used this property of the Bt bacteria to guard against infestation by the Bollworm by periodically dusting the cotton crops with dried extracts of soil rich in the bacteria.

When a gene of these bacteria is inserted into cotton, the altered cotton variety continuously produces the thuringeinsis toxin. Monsanto claimed this would provide double benefit - continuous protection against the pest, minimising pesticide usage and costs on one hand and on the other hand increasing yields by 20-25 per cent by curbing pest damages. There are today nearly 350 officially approved Bt hybrids—up from three in 2002 in India, including many unapproved varieties.

Most of these varieties have been developed by local seed companies with the Bollgard I gene and the newly approved Bollgard II (MON 15985) with stacked genes Cry1Ac and Cry2Ab which gives improved resistance to bollworm and a few other pests. Two additional events were approved, the first indigenous Indian Bt gene (developed in collaboration with a public research institution) and using Cry1Ac was by the firm JK Agri-Genetics, Ltd and a second event (GFM event) based on a Chinese gene, with a fusion Cry1Ab-Cry1Ac introduced by Nath Seeds. In 2007, 135 varieties of Bt cotton were available based on four events, the two Bollgard, the one of Agri-Genetic and a second Bt gene.

2011-12 will mark ten years since the GoI permitted the commercialization of transgenic cotton commonly known as Bt cotton.  The issue of transgenic cotton had been and continue to be one that generates heated controversy with claims made by civil society and counter claims made by Bt seed manufacturers. Many NGOs and environmental organizations have challenged its effectiveness; some accusing it of failing bio-safety and environmental safety norms while perhaps the most talked about controversy relates to the alleged resurgence of cotton farmer suicides in certain Indian states and their relationship with the use of Bt cotton.

This paper in three parts tries to analyze whether 10 years of observational data gives us any clues that can dampen the fires of this controversy. Specifically, it tries to answer two questions, both related to the main touted claims of the Bt industry:

a. Is Bt either a necessary or a sufficient explanation for increased in cotton productivity?
b. Have Bt succeeded in decreasing pest infestation in cotton to indirectly boost productivity and consequently bring about reduction in pesticide expenses?

Here ends Part I Click here for Part II and Part III. This paper is written by Rajan Alexander, Development Consultancy Group, Bangalore. Rajan is a livelihood consultant and had been in the NGO sector for more than 31 years.  He can be contacted at rajan.alexander@yahoo.co.in