The waning clout of NGOs: Totally isolated, ignored and blocked out of negotiations in Rio


"Rio will go down as the hoax summit. They came, they talked, but they failed to act," Barbara Stocking, the chief executive of Oxfam. 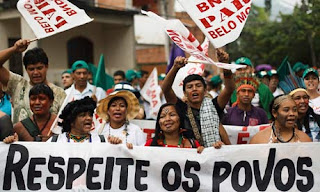 If taken up with all NGO rhetoric and think they are hyper-sensitive of their "carbon footprints", then think again. A reportedly 20,000 of them had an all paid holiday, jetsetting to Rio de Janeiro; staying at fancy hotels charging $ 1,000 per night and having one hell of a party. Even the EU MPs skipped the meet citing as a reason, their inability of meeting such high hotel costs. But costs did not stop EU NGOs and partner NGOs in developing countries having one helluva of an exotic vacation.

NGOs did try their best to get their presence felt.  Yesterday, with placards, balloons and chain saws, thousands of NGO activists staged a protest in central Rio against the UN Rio+20 summit on a 'green' economy. The march drew environmentalists, NGO activists, black militants, homosexuals, indigenous peoples and feminists dressed up in fancy dresses. Also parading was a gyrating samba queen in golden sequins, escorted by a life-sized bread tank with a garden inside to underline the realistic possibility of eradicating hunger and extreme poverty by redirecting military spending.

And yet despite all their attention seeking behaviour, they have nothing to show as results.  World leaders virtually ignored them and their demands in the draft of the Rio agreement. In fact, NGO’s have been blocked out from the negotiations. They are now only there for  theatrical entertainment and to provide the carnival atmospheric. And you can’t miss a palpable air of pessimism now enveloping the NGO community.

"We've sunk so low in our expectations that reaffirming what we did 20 years ago is now considered a success," said Martin Khor, executive director of the Geneva-based South Centre and a member of the U.N. Committee on Development Policy. The word "reaffirm" is used 59 times in the 49-page document titled "The Future We Want."

"It's pathetic," said Jim Leape, the head of WWF. "If this text proposed by Brazil is accepted, then the last year of negotiations has been a colossal waste of time. If you saw this document without knowing what it was supposed to be, you might think Rio+20 was convened as a seminar."

"Everybody should look in the mirror and ask what history is going to make of this. We face connected crises. Rio+20 should be a turning point, but it is a dead end," said Stephen Hale, Oxfam spokesman at Rio+20. "This summit could be over before it's started.

"The approach that has been taken is to go for the lowest common denominator. The trick here is to look very carefully at the UN-ese language being used. If they use the word voluntary, it means it is not going to happen. We saw anything of value in the early text getting removed one by one. What is left is the clear sense that the future we want is not one our leaders can actually deliver

Wael Hmaidan, Climate Action Network (CAN), delivered his message in a speech that lasted less than five minutes. Hmaidan explained that there were four problems with the document: there was no mention of reproductive rights of women, no mention of limits on the use and generation of nuclear energy, no details were presented on rules governing the oceans, and, finally, a lack of specific goals and deadlines in general. 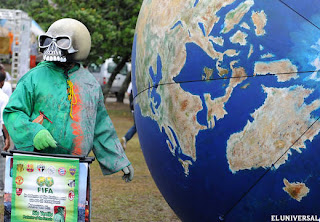 While NGOs are in the dump, India's Environment Minister, Jayanthi Natarajan is positively upbeat.

“One significant development has been the restoration of the centrality of the principle of common but differentiated responsibilities (CBDR) in the environmental discourse”.

Make no mistake. This will be the country’s principal negotiating weapon in the years to come. CBDR, in effect, is an escape clause for poor countries in any multilateral green negotiations. Its origins lie in the 1992 Rio Declaration and were added to the 1997 Kyoto Protocol, the first climate change agreement. CBDR basically says that developing countries cannot be expected to fulfill the same environmental obligations of rich countries.

A senior Indian official explained, “We can use this to fend off almost any demand from the West.”  This will matter as India, at least in the medium-term, will still need to burn fossil fuels, deplete its green cover and use technologies like genetic modification to maintain a high economic growth rate."

Paul Driessen argues in his book, Eco-Imperialism: Green Power, Black Death, the origins of modern environmental concern - intellectually, culturally and practically - could be traced to an eco-imperialist strategy to promote European expansion aims and a neo-imperialistic philosophy to keep developing countries destitute for the benefit of the developed world. Eco-imperialism has a racial dimension, and occurs when environmentalists place the well-being of the environment over the well-being of humans, particularly non-whites, living in developing countries.So it is no coincidence that international non-governmental organizations (NGOs) also advocate making national environmental policies subject to “international legal frameworks and regulations,” and “strengthening international environmental governance … within the institutional framework of sustainable development.” 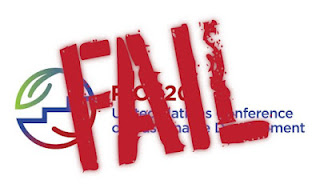 The glee of India's Environment Minister, Jayanthi Natarajan in succeeding in establishing the CBDR principle which check-mates these eco-imperialistic aims on one hand and the gloom of international NGOs, often described as the Trojan Horses of western governments operating in developing countries on the other hand could easily be understood.

The bottom-line of Rio is the story of international NGOs and environmentalism getting totally marginalized. They was a time not so long again when NGOs held a pervasive influence on policy.  Such was their clout that politicians of all shades took care not to be seen publicly on the wrong side of NGOs. No longer and NGOs themselves are to be blamed by their actions for such a decline of influence within the policy sphere!

Climate sceptics had even more reason to celebrate. As Morano, of Climate Depot noted:

Posted by Rajan Alexander at 10:25 AM