The probability for a below average monsoon [viz 90-96% of LPA] increases by a whopping 9% while those of a normal monsoon decreased 5% from their May forecast.  Since the IMD model possesses a statistical model error rate of + 5%, there is now theoretically, almost an equal probability for a below-average and a normal monsoon occurring this year.

It gets even much worse as seen in the above table. The probability for below average rainfall progressively increases from July to August - these two months accounting as much as 64% of rainfall during the South West monsoon in the country. July is the critical month for sowing in the country and till  August for establishment of the crop.

The forecast turns even more pessimistic when desegregated projections at the regional level are observed, which shows all 4 regions of the country expected to experience deficient rainfall ranging from 5-8% of LPA.  Except for the Northeast and Central India, wherein rainfall is forecasted near normalcy, South Peninsula and NW India are expected to bear the brunt of this deficiency. 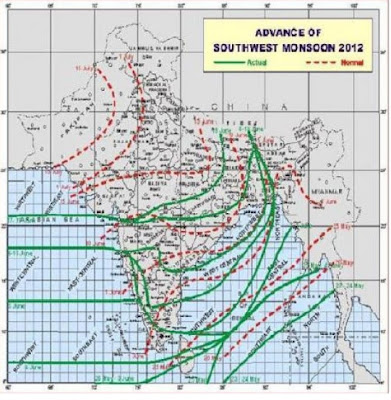 Of particular significance is NW India that includes Punjab, Haryana and Western UP, that together is considered as the granary of the country, which is expected to experience maximum rainfall deficiency.  For July and August, while rainfall during the entire season is likely to be 92 per cent of the LPA of 615 mm for North-West India, these are placed at 95 per cent each for East and North-East (LPA of 1,438.3 mm) and Central India (975.5 mm), and 93 per cent for the Southern Peninsula (715.5 mm).

This does not portend to good news for agriculture production this year, which should take a hit this year, though agriculture growth rate itself is expected to still be in the green - estimated within the range - 1.5-2%.

The IMD made two major assumptions regarding the Sea Surface Temperatures (SST) in the Equatorial Pacific and Indian Ocean.

The IMD assumptions regarding prospects of a developing El Niño as mentioned in their forecasts are as follows:

The IMD assumption that a weak El Niño will develop only by mid August may not hold as Nino3.4 is already approaching El Niño threshold values while the Southern Oscillation Index (SOI) have already crossed  threshold values by end of 3rd week June: 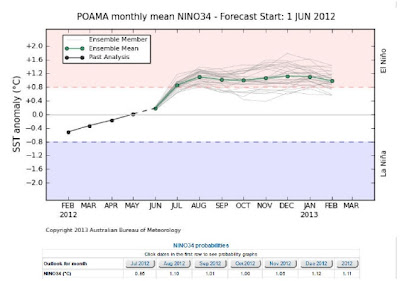 The Predictive Ocean Atmosphere Model for Australia (POAMA), a dynamical computer model of the climate system run at the Bureau of Meteorology (BoM), Australia. Their  Nino3.4 forecast suggests El Niño threshold values being reached by early July with weak El Niño conditions lasting through the end of first quarter next year.  If so, this would be contrary to IMD model assumption of El Niño thresholds being reached only by mid August. 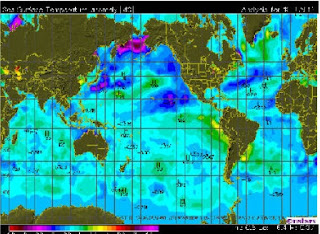 Where POAMA and IMD models find agreement is on the prospects of only a weak El Niño. With the Pacific Decadal Oscillation (PDO) in its cold mode and after a back-to-back La Niña for period 2010-2012, the probability of a strong or monster El Niño is extremely low. As seen in the above graph, there is a lot of cold water circulating from Alaska down the west coast of Canada, the US and Mexico. This cold water is mixing with equatorial Pacific waters and keeping SSTs in equatorial Pacific down.

So we can more or less confidently rule out the prospect of a strong El Niño this year. At worst,  we should experience only a weak to moderate strength El Niño event this year influencing the monsoon behaviour from July.

The IMD assumptions regarding prospects of a developing Indian Ocean Dipole (IOD) as mentioned in their forecasts are as follows:

"...models suggest possibility of the development of a weak negative Indian Ocean Dipole event during the second half of the year, which may not have much impact on the Indian monsoon."

During a negative phase of the IOD, sea-surface temperatures get warmer to the east Indian Ocean relative to the west, which robs mainland of convection and moisture.  Exactly reverse is the case of a positive IOD when the west Indian Ocean warms up, and aids the monsoon current approaching the Kerala coast.The IOD mimics the El Niño-Southern Oscillation (ENSO) pattern nearer home in the Indian Ocean and for this very reason, the IOD phenomenon has a more direct and immediate impact on the Indian monsoon.

And yet the IMD considers the IOD not having much impact in their monsoon forecast!.

“Our Sintex-F model continues to predict a negative Indian Ocean Dipole (IOD) during this summer and fall."

RIGC’s forecast track record is extremely impressive. The RIGC team had been warning about a ‘cool summer’ for India this year (since proved true) followed by a below-normal monsoon right from February. Even earlier when most global models were forecasting a weak to moderate La Niño early 2010, RIGC not only forecasted a strong event but also a two year La Niño and this too proved correct. Their forecasts of the last two years Indian monsoon also hit the bull’s-eye. Perhaps no other global model can forecast IOD behaviour as well as the RIGC model and so when they predict a negative IOD it cannot be brushed aside easily. A negative IOD in July or August can have a fairly swift impact on rainfall by moving rain-bearing convection away from the Indian mainland.

But the RIGC IOD forecast was made in May when the IOD model projections suggested a greater probability of it turning negative. But by mid-June, model projections are suggesting the exact opposite - the IOD turning moderate to strong positive during the monsoon months - July-September period. 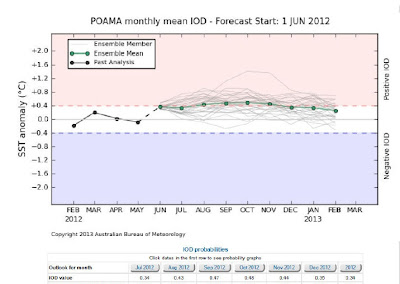 Rathore, chief of IMD however remain highly optimistic of the monsoon doing well.

"We are witnessing an improvement of 2%-3% each day and by the end of June total rainfall should go up to about 85%. Thankfully, quantum of rain for June of the total 89 cm is quite low. July and August together get about 65% of the total rainfall and prediction for both months is reasonably good".

The Indian Ocean Dipole comes into play only during ENSO Neutral conditions?

It is fairly evident that El Niño values would be crossed by the end of last week June. It is fairly also safe to assume ruling out a strong El Niño event this year.  So the first assumption in our revised forecast is that weak El Niño conditions will prevail for the monsoon months - July-September.

Could the IOD play a significant role in moderating the influence of an El Niño? There are two scenarios as following that could be considered?

The last time an El Niño coincided with a negative IOD was in 1930 and this is how the monsoon behaved in 1930 according to IMD data:

Accordingly a coupled El Niño-negative IOD effect has a probability of 1: 111 chances of being actualized.  The last time such an event took place 82 years ago. The probability of a coupled El Niño- negative IOD phenomena affecting the monsoons this year looks very improbable. Even if it occurs, rainfall it is likely to still be within the normal range viz. 96-100% of LPA.

The average rainfall for these years demonstrates a 4% deficiency of LPA, coincidentally the same amount forecasted by the IMD!

We accordingly revise our May forecast to now predict overall rainfall between 92-98% LPA at 95% confidence level.  This is assuming a weak El Niño with IOD, either positive or negative, having insignificant impact.

But should the El Niño fizzle out, and a positive IOD develops, the likelihood of rainfall between 96-102% is still possible but with a low probability in terms of outcome.

So will the IMD monsoon forecast pip global models in hitting the bulls’ eye?  Probably yes.