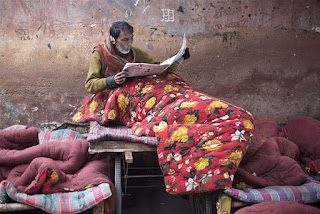 (Times of India) Why are we sleeping in the refrigerator? I asked Bunny. We`re not sleeping in the refrigerator; we`re sleeping in our bedroom, as we normally do, she replied. This conversation took place during the recent cold wave that swept north India, and many other parts of the world. In Haryana, where we live, the temperature went down to 0.6 C, making not just the bedroom but all the rooms of the house feel like the inside of a fridge. The freezer compartment of the fridge.

Teeth chattering in morse code I marvelled at this unique phenomenon of global warming. How had this global warming — which was melting the Arctic ice cap and giving polar bears heatstroke — all of a sudden become a global colding? What next? Would they schedule the skiing and ice-skating events of the forthcoming Winter Olympics in the Thar desert in mid-July?

However, environmentalists soon came up with a phrase which explained why the planet was freezing over even as it was heating up; it was an example of what they call Extreme Weather Events (EWEs). Thanks to global warming the Earth would increasingly experience extremes of weather; unusually hot hot waves, unusually cold cold waves.

As we huddled in front of a feebly glowing electric heater, both of us bundled up in woollies, Mili the dog and i mused on the wondrous laws of Nature which could turn global warmth into global freeze, all as part of the day`s work and no overtime either. How cool — or how globally warm? — was that. How cool indeed, Mili yowled in acknowledgment, an icicle forming on the tip of her nose.

As we shivered and shuddered in sympathetic unison, it struck me that it wasn`t only the meteorological climate that was susceptible to EWEs; if anything, the political climate was even more susceptible to EWEs, except that in its case the W in EWEs stands not for Weather but for Whether, as in whether or not particular politicians are or aren`t going to do whatever it is they`ve said or not said they will do or not do.

Take the Congress-led UPA government. When it first assumed office, it had gone about initiating economic reforms like bushy-tailed squirrels gathering nuts in May, putting roller skates on the Hindu rate of growth and sending it zipping along at 9% a year. Then all of a sudden it had sat down on its thumbs and gone into hibernation, letting the HRG (Hindu rate of growth) fall back to a limping 5%. Economy? Reform? What dat? Then, again without warning, it had once more perked up and gone into reform overdrive. FDI in retail. Rail fare increase. Fuel price hike.

Back in Haryana`s Extreme Weather Event, i decided to sleep in the refrigerator. It`d be warmer. I opened the fridge door. Someone was already inside. It was Mili, snugly warm in sleep. I shut the fridge. It could have been much worse. Instead of Mili, it could have been our neighbourhood neta, seeking shelter from the vagaries of Extreme Whether Events.

Posted by Rajan Alexander at 9:49 PM