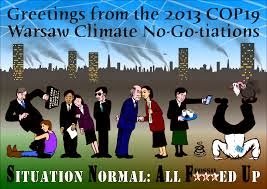 (Forbes) Why do they bother?  At this time every year, the U.N. holds a meeting of the Parties to its climate change treaty adopted at the Rio “Earth Summit” twenty-one years ago, and in force for 19 years.  In the intervening time, there isn’t a single shred of evidence that it has done anything about global temperature.


In no small part, that’s because global temperature hasn’t done very much.  Two years after it went into force—if you believe the surface temperature history that scientists consult the most—we entered into an era with no significant additional warming.  That makes it kind of hard to find any signal resulting from the treaty.


The playbook is as predictable as the futility of the Cubs.  Weeks before the confabs begin in November, environmental groups and activist scientists gin up the usual “it’s even worse than we thought” meme.  The New York Times will carry a front page story by Justin Gillis, which will be shredded for its (many) sins of omission by the blogosphere before noon.


Not to be outdone, the Washington Post will carry a masthead piece that It’s Time to Get Serious,  perhaps as Sewious as Elmer Fudd is about the Wascally Wabbit.


Soon the conference begins.  This year, 10,000+ descended upon Warsaw, very few flying in the back of the airplane.  While there are 189 signatories to the treaty, only 134 countries are sending anyone of ministerial rank. Hey, we’re serious about this!


An added fillip this year was the landfall of Typhoon Haiyan in the Philippines just days before the gathering.  UN Secretary General Ban Ki-moon was happy to conflate it with global warming, in complete contravention to his own Intergovernmental Panel on Climate Change’s latest science report, released just two month ago, saying that there’s really not much of a link, after all. According to the IPCC,  “there is no significant trend in global tropical cyclone frequency.”


The purported business of Warsaw is to begin to hash out a new treaty, scheduled for 2015, to replace the predictable failure of the Kyoto Protocol on greenhouse gases.  Without jiggling the figures, most nations didn’t live up to their “commitments,” and even if everyone had, there would be no detectable effect on temperature—even six decades from now.


That’s the purported business.  The real business is to serve as a two-week hectoring platform for poor countries to euchre the developed world for money to adapt to the supposed climate horrors we are raining down on them.  The usual figure bandied about is $100 billion a year, mainly from U.S. taxpayers (and their children and their grandchildren).  A nation pushing $17 trillion in debt isn’t likely to blithely take on another tranche.


It is a fact that poorer nations are impacted by the vagaries of weather and climate much more so than affluent ones.  Even modest development helps a great deal.  43 years ago tropical cyclone Bohla—a mere category 3 storm—killed at least 300,000 in East Pakistan (now Bangladesh).  Thanks to better infrastructure, detection and forecast technology, and improved communication, that’s just not likely to happen again, even in a stronger storm.  Consequently, the way to adapt to weather, climate, and climate change is to foster economic growth, not to simply send money.


Near the end of each conference there’s the requisite foot-stamping.  This year, these countries and the myriad environmental groups “walked out” in protest over the lack of action (i.e. money).


On the last scheduled day, (this year it was November 22), a vague draft “agreement” usually appears and news leaks of a “deadlock” between the developed and less-developed world.  The attendees to stay overtime, usually overnight, and a breakthrough  is announced.


Then nothing happens until next year.


Wait for the uptick in editorials about “it’s serious this time,” the breathless news stories and op-eds in the dinosaur media, their shredding in the blogosphere, and you’ll know the next UN climate confab is about to begin. 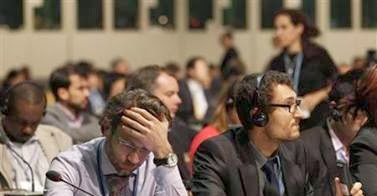 “This was a sham. It was supposed to be about increasing emission cuts, but what we saw was the opposite – Japan lowering its target, Australia rolling back its climate legislation and Brazil reporting a 28% increase of its deforestation rate.


Furthermore, the complete failure of rich countries to deliver on existing promises on long-term finance is putting the most vulnerable people at risk. Too many governments, North and South, continue to block progress towards a new global climate agreement while serving their coal and oil lobbies, rather than their people. Greenpeace, looking into the future, expects to see a new kind of leadership from emerging economies.They have become powerful players in the international community. With power comes responsibility.”

“Negotiators in Warsaw should have used this meeting to take a big and critical step towards global, just action on climate change. That didn’t happen. This has placed the negotiations towards a global agreement in 2015 at risk.


A repeat performance next year would be disastrous, not just for the progress of these negotiations, but more importantly for vulnerable communities everywhere and the natural world on which we all depend.  By the time we get to next year’s meeting in Lima, we urgently need to have political will, real commitments, and a clear path to a comprehensive and fair agreement in Paris 2015, where a new global agreement on climate change has to be signed.


Heads of state will need to come to the UN Leaders’ Summit called by the Secretary General next September with new commitments that match the scientific evidence of climate change. Heads of state also will need to engage directly in the negotiation process going forward, especially in Lima and Peru, if that’s what it takes.”

“At the talks Japan joined Canada in back-peddling on promised emission reductions. Australia, the US and EU have refused to say how they will deliver on their commitment to scale up climate finance. And the US, Australia, Japan, Canada, China, India, Brazil and others have pushed through a blue print for a new climate deal which will allow countries to choose their own weak emissions reduction targets. Very few countries can leave Warsaw with their head held high.


We have witnessed a race to the bottom in these negotiations and it’s the world’s poorest people who stand to lose the most,” said Byanyima. It’s time to press the reset button. We need to take these critical decisions for our planets future out from behind closed doors and give them back to the people. A global climate deal still offers the best hope of avoiding climate catastrophe but it’s going to take every one of us to make it happen.”

“Typhoons are increasing.  Sea-levels are rising. Species are dying.  Establishing the Warsaw International mechanism merely upholds the commitment made in Doha last year.


It is the barest minimum that was supposed to be achieved at Warsaw on loss and damage anyway.  A few rich countries including the US held it hostage till the very end. Rich countries have buried their heads in the sand denying poor women and men hope for a safe future. The mechanism’s current architecture falls within the area of adaptation and fails to acknowledge that the world has gone ‘beyond adaptation’ and entered the era of loss and damage. The established Warsaw International Mechanism on Loss and Damage is too weak to tackle the enormous impacts already occurring due to climate change.”

“In the end, agreement was struck on a roadmap to the 2015 agreement, small but important steps towards a “loss and damage” mechanism to help vulnerable countries address unmanageable climate impacts, and a mixed bag on financing investments for low emissions and climate resilient development in poorer countries. Interestingly, Australia didn’t withdraw formal support for its second commitment under the Kyoto Protocol, nor its formal emission reduction pledges of up to 25 per cent or the conditions shared at previous summits.”

“We’re careening into planetary catastrophe, and most of our leaders are still sleepwalking through these negotiations. But there are signs of hope — especially the noble Yeb Sano, whose emotional wake-up call probably saved Warsaw from being a total wash-out. Now we’ve got just 24 months to get spoilers like Australia and Japan out of the way, and make sure it’s people and not polluters that win at the big summit in Paris in 2015.”

“Governments are leaving Warsaw with little progress to avert the climate crisis which is increasingly impacting the lives of millions of the world’s poorest and most vulnerable people. Rising sea levels, melting glaciers and increasingly extreme and erratic weather events are undermining development and trapping people in a permanent state of emergency.


Perversely, the world’s poorest people have done the least to cause climate change but are also bearing the highest costs; this is a grave social injustice which requires urgent action right now on the part of rich nations. There is no excuse for inaction or further delay.”

“While expectations for this summit were low from the outset, decisive steps on the road to a comprehensive international agreement in two years time were the minimum that is urgently needed. Developing countries have stood together here in their fight for adopting an international mechanism to address loss and damage.

But the ‘Warsaw mechanism’ we got is far below expectations, not providing for a strong structure to address disaster risk reduction, rehabilitation, recourse and remedy measures. We have all seen from the great impact of the Philippines typhoon the urgent need for a coordinated response from the international community. We will continue to ask to develop the Warsaw mechanism into the robust and independent instrument needed to cope with the realities of loss and damage that many of the poor and vulnerable continue to face.”

“In the nick of time, negotiators in Warsaw delivered just enough to keep things moving. The talks opened with a tragic reminder of what is at stake, but there were few signs of urgency within the negotiating rooms. Country representatives now need to return home to make significant progress on their work plans and national offers that can become the backbone of a new climate agreement. It’s important for countries to present their offers as soon as possible and in an open and systematic way. These commitments need to be driven by science. They should be both ambitious and equitable.”

Posted by Rajan Alexander at 7:13 PM