A Lukewarm Budget for Global Warmists

The Green element of the budget, though high on rhetoric, fell short of any spectacular budgetary allocation in terms of GDP. The government remains committed to the “polluter pays” principle. The National Clean Energy Fund (NCEF) announced will be financed by a fossil fuel - coal. The fund will establish a large enough corpus to meet India’s plans to boost solar energy production to 20% of all energy production by 2022.


The reduced demand from OECD countries, particularly Germany, has plunged the global prices of solar panels and accessories by over 25%. This offers the country an opportunity to capitalize on low prices and hence lower capital cost for solar power projects.

On the flop-side, a Rs. 50/tonne cess on coal that will fund the NCEF is estimated to mobilize at least  Rs 2,500 crores in 2010-11. On one hand, shortages in coal supply have already resulted in a generation loss of 10.7 billion units of power at various thermal power projects in the country during April-December 2009 – meaning that unless the country plug these supply constraints, this Rs 2,500 crores maybe an over-estimation of budgetary allocation to NCEF.

On the other hand, this cess will increase power generation cost by an estimated 3.4 paisa per unit. Though less than 1% of the total cost of power generation this marginal increase will hard hurt sectors like tea, steel, cement and fertilizer as they all depend on coal in some way or other. Accentuating its inflationary effect further are the power distribution companies who are readying themselves to increase power prices by at least Rs 2 per unit. Such a development  will prompt state governments, especially in opposition ruled states to revolt, pressurizing the central government to roll back the announcement. 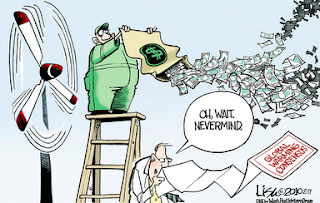 Through this blog, we encourage Sushma Swaraj and Arun Jaitley, leaders of the Opposition in the Lower and Upper House of Parliament to table a cut motion that seeks to reduce the Rs 50 cess placed on one ton of coal to Rs 5.

The green emphasis of the budget was essentially brought about by making dependence on fossil fuel more expensive and those related to renewable energy cheaper. Though the mainstream climate activist movement welcomed these steps as a victory, in reality, this was a slap across their faces.  Most of the negotiation for a Global Climate Treaty will now on focus on financing of the Global Climate Fund. The policy of mainstream climate activist organizations invariably supports carbon trading as a key financing mechanism. The government through the budget was making a strong statement – they gave big thumbs down for carbon trading and unequivocally opted for the taxation route.

Posted by Rajan Alexander at 8:46 PM