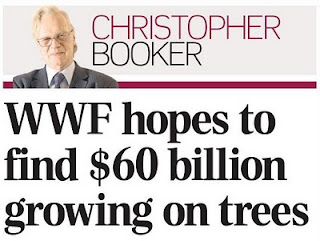 Amazongate is the story of IPCC being exposed for yet another false scare. IPCC based its conclusions on a WWF study which forecasted that as much 40% percent of the forests would disappear due to climate change induced drought. New peer reviewed studies now dismiss this claim as false.

The first study used NASA's satellite imagery to publish a paper in a scientific journal - Geophysical Research Letters (Read detailed study here.) The study, authored by Arindam Samanta of Boston University found no significant difference in the greenness level of these forests between drought and non-drought years - confirming their high drought tolerance.

In fact, NASA went further to attribute the effects of enhanced sunlight under drought conditions as actually increasing the capacity of rain-forests to thrive!  Another peer reviewed study the National Academy of Sciences (Read here) drew similar conclusions. Quizzed by Christopher Booker in his investigation of Amazongate, Dr. Jose Marengo, a Brazilian National Institute for Space Research climate scientist and member of the IPCC conceded:

"The way that the WWF report calculated this 40% was totally wrong."

So was this then a mere human error?

Christopher Booker in his latest investigative report suggests this is not so and that there could be a more sinister motive behind such miscalculations:

"WWF and other green campaign groups talking up the destruction of the Amazon rain-forests are among those who stand to make billions of dollars from the scare. This "green gold-rush" involves taking control of huge tracts of rain-forest supposedly to stop them being chopped down, and selling carbon credits gained from carbon dioxide emissions they claim will be "saved" Backed by a $30 million grant from the World Bank, the WWF has already partnered in a pilot scheme to manage 20 million acres in Brazil. If their plans get the go-ahead in Mexico at the end of the year, the forests will be worth over $60 billion in "carbon credits."

This allegation of carbon profiteering not only damages WWF's own credibility but  tends to drag down with it, all other advocacy programmes of the NGO/environmental sector as a whole.

Posted by Rajan Alexander at 1:29 PM