Solar Theory Emerges the Most Plausible explanation to Earthquakes

“Just hours after the horrific earthquake and tsunami devastated coastal areas of Japan, global warming alarmists like the BBC are already injecting climate change propaganda into their coverage of the story, hastily exploiting the tragedy as a vehicle through which to push their increasingly desperate and discredited enviro-fascist agenda.

If you thought that climate change alarmists wouldn't be so insensitive as to build their warped argument on the bodies of freshly dead corpses, then think again." 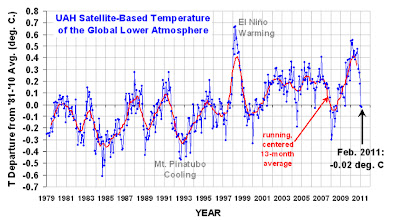 Global warmists now claim that the recent double whammy, earthquake and Tsunami, suffered by Japan were on account of Global Warming. Is this alarmism or fact?

So let’s begin by a check on global temperatures. As seen in the above graph, the last two months (January & February) UAH satellite data indicates that average global temperature anomaly has slipped into the negative band due to the current La Niña's effect. Temperatures are back to those we experienced during seventies global cooling period. Japan is still in winter. Victims of these recent extreme events in Japan have to face snow and sub-zero temperatures, which is the reason India sent tons of blankets - to make our small relief contribution count! So what global warming are we talking about?

Tsunamis arise from the sudden displacement of gigantic water masses due to earthquakes on the sea bed, volcanic eruption above and under water, landslides or meteorite impacts. About 86 % of all Tsunamis result from so-called sea-quakes. The recent Tsunami falls under this category.

The word tsunami (combining a character meaning port - tsu and the character for wave - nami) was first coined in a historical period referred to by the Japanese as Edo (1603-1868). The latter coincides with a period climatologist now describe as the Little Ice Age (LIA) where average global temperatures were 1-1.5 degree Celsius cooler than they are today.

During this LIA period, the planet was so cold that River Thames used to regularly freeze during winters and the Vikings were forced to give up their colonalization of Greenland. Although there is some disagreement about exactly when the Little Ice Age started, records suggest that temperatures began cooling around 1250 A.D. after a Medieval Warm Period were temperatures were estimated to be slightly warmer than today’s climate. The coldest time during LIA was the 16th and 17th Centuries; ironically within the period the word Tsunami was estimated to have been coined.

If this be the case, this should clearly establish that Tsunamis, as a phenomenon, is temperature neutral. The earthquakes that trigger them are likewise temperature neutral. The Great Lisbon earthquake in 1755 during the LIA period is an illustration of this reality. The earthquake was followed by fires and a tsunami, which caused near-total destruction of Lisbon in the Kingdom of Portugal, and adjoining areas. Geologists today estimate the Lisbon earthquake approached magnitude 9 on the moment magnitude scale. 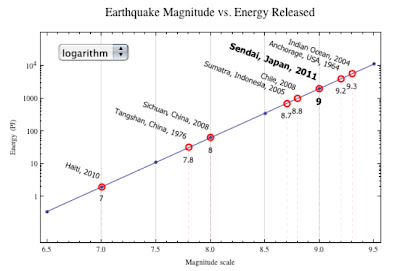 Earthquakes are mainly geological phenomenon caused by the movement of tectonic plates (also called Freudric momentum) and at the boundaries of tectonic plates, which form huge faults on the surface. The entire Japan is seismically categorized as 5 - the highest rating for vulnerability to earthquakes. This is because Japan is either on or close to the boundary of four tectonic plates: the Pacific, North American, Eurasian which are primary plates, and Philippines Sea plate, which is one of the secondary plates.

When large enough forces are applied in two different directions, they overcome the friction between the boundaries and cause a sudden movement. The phenomenon is also known as a strike-slip. These plates are at constant movement but not a smooth rate... The stress builds up over time -- over years, decades and centuries, and then at some point it overcomes the lock between two parts of the crust. As the plates move, they hit each other, building pressure. Then pressure releases, causing earthquakes and the rising seabed triggers tsunami. The recent earthquake is estimated to have generated energy that was roughly equivalent to the energy the US consumes in a year.
Japan is located along the Pacific "ring of fire," an area of high seismic and volcanic activity stretching from New Zealand in the South Pacific up through Japan, across to Alaska and down the west coasts of North and South America. Just how vulnerable Japan is to earthquakes is explained by a blog: 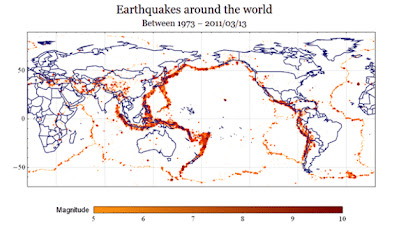 Yu-Sung Chang in a blog post provided the following visualization created from the U.S. Geological Survey (USGS) database of earthquakes that occurred between 1973 and early 2011 whose magnitudes were over 5. Epicentres are concentrated in narrow areas, usually on the boundaries of tectonic plates. In particular, there are severe seismic activities around the Pacific, namely the “ring of fire”. Unfortunately, Japan is sitting right in the middle of this highly active area. So is the Japanese Earthquake peculiar in any sense and are earthquakes in general increasing in frequency?  This is what CNN asked Colin Stark Lamont Associate Research Professor at the Lamont-Doherty Earth Observatory of Columbia University. Lamont is a geophysicist and geomorphologist whose research focuses on the effects of typhoons and earthquakes in triggering landslides and eroding Mountain Rivers.  This is what Stark replied:

“Geologically speaking, it's nothing special. Seismic activity is not increasing, and the tectonic plates driving all the seismicity are not accelerating -- not by any geophysical measure we have at our disposal. Truly huge earthquakes seem to have become more frequent over recent years, partly because their impact on society has risen as vulnerable cities have mushroomed and become more fragile, and partly because of the rarity of gigantic earthquakes and their tendency to cluster for statistical reasons and nothing more. It's a matter of perception and coincidence." 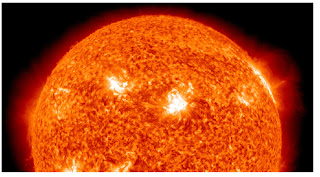 “After four years without any X-flares, the sun has produced two of the powerful blasts in less than one month: Feb. 15th and March 9th. This continues the recent trend of increasing solar activity associated with our sun's regular 11-year cycle, and confirms that Solar Cycle 24 is indeed heating up, as solar experts have expected. Solar activity will continue to increase as the solar cycle progresses toward solar maximum, expected in the 2013 time frame.....

A solar flare is an intense burst of radiation coming from the release of magnetic energy associated with sunspots. Flares are our solar system’s largest explosive events. They are seen as bright areas on the sun and they can last from minutes to hours. We typically see a solar flare by the photons (or light) it releases, at most every wavelength of the spectrum. The primary ways we monitor flares are in x-rays and optical light. Flares are also sites where particles (electrons, protons, and heavier particles) are accelerated....


So a CME hit Earth as recorded by NASA on March 10th, interfering with planet’s magnetic field and hours later; Japan experienced the worst earthquake in its recorded history.  In February 24th a M3-class solar flare was detected, and hours later the New Zealand earthquake occurred. Similarly, the Leh Cloudburst also occurred hours after a CME hit earth.

Coincidence or fact? This is left to future research to confirm. Till then, here's a BBC article on this subject"

Is Solar activity to blame for Japan's massive earthquake?
BBC

The massive earthquake that affected Japan this morning is one of the strongest in recorded history at 8.9 on the Richter scale. With a number of powerful earthquakes recently it once again begs the question, is there a link between seismic activity and solar activity? Recently we have witnessed a very unusual, prolonged period of low solar activity. Solar activity though has increased sharply in recent weeks. Only yesterday I noticed that the number of recorded sunspots (a crude measure of solar activity) was in excess of 100 - compared with 6 months ago when the number of sunspots was zero. In March last year a preliminary study was published from the Space and Science research centre in Florida. A review of historical records was performed for 350 years of global volcanic activity (1650-2009) and seismic (earthquake) activity for the past 300 years (1700 to 2009) within the continental United States and then compared to the Sun's record of sunspots as a measure of solar activity. According to this study, there exists a strong correlation between solar activity and the Earth's largest seismic and volcanic events. They found an impressive degree of correlation for global volcanic activity (>80.6%) and for the largest USA earthquakes (100% of the top 7 most powerful) versus solar activity lows. According to another study, published in Earth and Planetary Science letters, solar activity, as indicated by sunspots, radio noise and geomagnetic indices, plays a significant but by no means exclusive role in the triggering of earthquakes, with maximum quake frequency occurring at times of moderately high and fluctuating solar activity - which is what we have seen in the last few weeks. Piers Corbyn, at Weather action, added last month following the New Zealand earthquake that within such long quieter solar periods like we have been through, the biggest earthquake & volcano events are triggered by extra solar activity, particularly during the the rising phase of even solar cycles. This is precisely where we are now as Solar cycle 24 gains in strength. He also claims that solar activity strongly influences climate patterns too. According to Mr Corbyn, 'The (New Zealand) event follows the world wide increase in volcanism and earthquakes in the last year or two and confirms the general statistical fact that more - and more serious - earthquakes, and volcanic activity, tend to occur around solar cycle minima'. He reckons there will be more strong earthquakes like the ones we have recently witnessed in the next 2 years.

This is another one of those frustrating areas of science. There does seem to be empirical evidence to show a link between periods of low solar activity, and increased occurrences of earthquakes, but quite why this is so is not fully understood.
Dr. Vincent Courtillot is a professor of geophysics at the University Paris-Diderot and Chair of paleomagnetism and geodynamics of the Institut Universitaire de France. In the recent lecture below he explains how solar cycles control the climate by influence on cloud formation (the cosmic ray theory of Svensmark et al) and via influence on ocean oscillations and length of day.

Dr. Courtillot notes that IPCC climate computer models do not correlate with observations and that temperature trends vary substantially between North America and Europe (which is contrary to IPCC computer model predictions). He also notes that while the total solar irradiance (TSI) only varies by about .1% over a solar cycle, the solar UV varies by about 10% and that secondary effects on cloud formation may vary up to 30% over solar cycles. The IPCC computer models dismiss the role of the sun by only considering the small variations of the TSI and ignore the large changes in the most energetic and influential part of the solar spectrum - the ultraviolet.

Posted by Rajan Alexander at 9:37 AM