A prolonged La Niña – what are the implications? 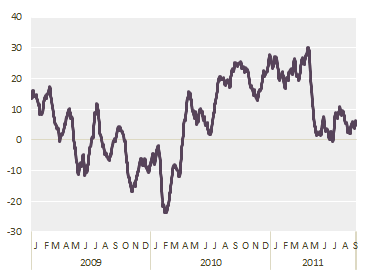 Should we be getting agitated about the possible prolongation of La Niña weather? Yes and no. Yes, because the abnormal weather patterns that follow La Niñas are highly disruptive to a wide range of crop production. No, because the La Niña impacts this time round may be weaker, although strong enough to change the balance between surplus and deficit for some crops. Headlines along the lines of ‘La Niña is back’ are, however, misleading – it never entirely went away.

La Niñas often take their time to finally disappear. The La Niña that started forming in mid-2010, peaked around the turn of the year, then ebbed away a little, is simply dragging on. Although the doom-mongers of climate change will be tempted to see this as further evidence of a structural and alarming development, this pattern is not unusual.

The La Niña of May 1998-March 2001, for example, waxed and waned in its intensity, but it’s generally agreed it was a single, extended event. If we care to go back even further – before man-made climate change scares had surfaced – to La Niña of April 1954-January 1957, that 34-month event saw much less variation in its intensity. So if we are trying to peer forward, we might best be advised to settle down and await the final end of this La Niña in the first half of 2013.

Even if this La Niña turns out to be somewhat weaker in the (possibly) two years of its remaining life, it could have some pretty dramatic consequences for crops. In very simple terms, the severe intensity of the La Niña so far has left certain large regions of the world in a poor state to combat very much more in the way of weather extremities.

The first whole year of this La Niña has been accompanied by record-breaking severe drought across much of the South Western and Southern states of the US, with dire consequences for cotton and cattle. Argentina and southern Brazil – key producers of soybeans and grains – may well experience a drier-than-ideal period in the run-up to the end of 2011. Arabica coffee output could also be threatened in Brazil, where the state of Minas Gerais – centre of the country’s coffee-producing region – had almost no rain in July and 70% less than the long-term average in August. If – as seems to be happening – rainfall is highly erratic in September, then the crucial flowering of the coffee trees is in danger of aborting, thus reducing the overall final harvest.

But it’s an ill wind that blows no one any good. La Niñas tend to correlate with plentiful rainfall in West Africa, helping to produce strong cocoa harvests. Few thought that last season’s record-busting West African cocoa output could be repeated – but perhaps they will be wrong. And the widely anticipated global cocoa deficit in 2011-2012, perhaps >100,000 tonnes, may disappear, after all. Certainly, those speculative investors who have helped international cocoa prices remain around $3,000/tonne for so long – far in excess of what the supply-demand fundamentals have justified, following a big surplus this past season – seem to have taken fright. Last week the price dropped 4% in New York. They are probably taking note of La Niña – as well as sluggishly growing demand.

Posted by Rajan Alexander at 12:27 AM