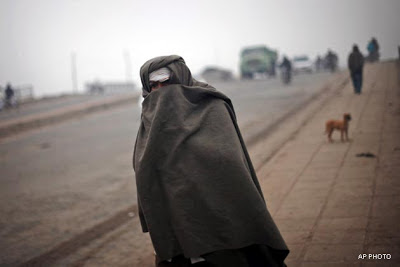 
Though clouds have put an end to the cold wave, the weather department has predicted a fall in temperatures by 4-6 degrees Celsius in the region and parts of Central India from February 7 onwards.


Intermittent rain lashed many parts of the Capital on Monday and more showers are expected in the next few days. Upper reaches of Himachal Pradesh and Jammu and Kashmir received heavy to very heavy snowfall.

"Overall, it is a good wet spell over North-West India. One-to-two spots in Himachal Pradesh have got around 100 cm of snowfall," said Dr. B. P. Yadav, director, India Meteorological Department.

Punjab, north Rajasthan and Haryana have received good amount of rainfall, he said, adding that Delhi - which recorded 1.6 mm rain between 9 am and 5.30 pm on Monday - is expected to witness more thunderstorms.


The weather department has forecast rains and thundershowers over Delhi, Punjab, Haryana, Uttar Pradesh and Rajasthan over the next three days. It has also warned of hailstorm in these states in addition to J&K, Himachal Pradesh and Uttarakhand during this period.


Heavy rains lashed the national capital today, throwing traffic out of gear in many parts of the city due to waterlogging. The Met department has predicted more rains and thunderstorm in the capital throughout the day.


The rain gauges measured 1.8 mm of rainfall for a period of 24 hours till 8:00 AM. The rains, which started late last night, continued this morning.


Vehicular movement was affected in several areas, including ITO, Vikas Marg and South Extension due to low visibility and waterlogging.


The minimum temperature was recorded at 11.7 degrees, three notches above normal but the windchill factor added to the chill in the air.


The maximum temperature in the last 24 hours was recorded at 19.3 degrees Celsius, which is three degrees below normal. The Met department said cloudy weather condition is likely to continue for the next couple of days.

Posted by Rajan Alexander at 5:30 PM