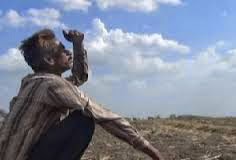 (DeccanHerald) Though the Southwest monsoon has covered vast tracts of the country, rainfall deficiency for the season so far has increased to 53 per cent and the worst-affected areas are peninsular and central India.

Out of 36 meteorological subdivisions, rainfall remains deficient and scanty in as many as 26, the Indian Meteorological Department said  in a statement. As a result, central India is 74 per cent deficient whereas the shortage is 62 per cent in the southern peninsula.

As the monsoon was stalled for 11 days in June, it led to depletion of water from storage dams as well.

Live storage in 85 important reservoirs has come down to only 24 per cent of their capacity and southern India is at the most disadvantageous position.

The less-than-normal rainfall condition may continue for another week in most parts of the country except eastern India. The weather conditions, however, remain favourable for further advancement of monsoon in the remaining pockets of northwestern India, where the deficiency is 49 per cent at the moment.

Above-normal rainfall for western, central and peninsular India may resume around July 11 and is expected to continue till July 20. The weathermen hope it would make up the shortfall.

Meanwhile, Skymet, a private weather agency, on Friday claimed there was 60 per cent chance of drought for the country as a whole, whereas the chances of drought are the maximum in north-west India (80 per cent) and central India (75 per cent).

The agency, which neither has its own weather data collection network nor high-performance computing power, defines drought as less than 90 per cent of average rainfall.

The IMD, on the other hand, classified drought as an occasion when rainfall for a week is half of the normal or less and when the normal weekly rainfall is above 5 mm or more.

In India, it is not the weather agency but the agriculture ministry and the state government that declares whether there is drought in an area.

According to a categorisation made by the National Commission on Agriculture in 1976 there are three types of drought – meteorological, hydrological and agricultural.

Posted by Rajan Alexander at 10:14 AM