The worst of monsoon deficit may be behind us. Rainfall may pick up shortly but is such turnaround a tad too late?

The Australian Bureau of Meteorology (BoM) latest model forecasts provided some stunning news.  The much touted “Super El Nino” just mysteriously dissipated into mid-air, leaving La Nina like conditions. Sea Surface Temperatures (SSTs) in Nino3.4 areas are plunging and expected to turn negative within this month and the Southern Oscillation Index (SOI) have bounced back to be La Nina like as seen above!!

If this is not a blip, this would be only the third time in recorded history that El Nino threshold levels were crossed and then went suddenly bust, the other times being the 2008 & 2012 monsoon seasons.  With the Pacific Decadal Oscillation (PDO) being in its negative mode, it is difficult for an El Nino to gain strength, leave alone attain super status. The atmosphere besides is La Nina like perhaps responding to global oceanic temperatures largely being below average. Global ice extent is near record expansion with the Arctic above average and the Antarctica at all time record expansion.

The current warm surface and cooling subsurface is typical of conditions early in the year as a major El Nino dies and switches to La Nina. Latest GFS shows another burst of easterly trade winds in the central Pacific, and a cooler subsurface not too far underneath. A cool PDO may still need to release heat from the western warm pool so it doesn't build up too much, and maybe a cool PDO favours bust El Ninos as a method of releasing this heat without actually having an El Nino.

So with the El Nino Southern Oscillation (ENSO) apparently returning to neutral, this would create a better outlook for a monsoon revival which should take place after the Neoguri Super Typhoon effect recedes, which should be sometime around weekend.  Can it be sufficient conditions to trigger excessive rains to offset the current rainfall deficit? Most likely – no but the rainfall should be sufficient to ward off serious drinking water and power shortfall problems though not coming in time to boost sowing sufficiently to offset negative agricultural growth. One of adverse condition for the monsoon remaining is the Indian Ocean Dipole (IOD) which remains moderately in the negative mode. As long as IOD persists in its negative mode, we cannot expect bountiful rainfall. On the other hand if the IOD were to strengthen in its present mode, we could still expect the monsoon being continued to be stalled. 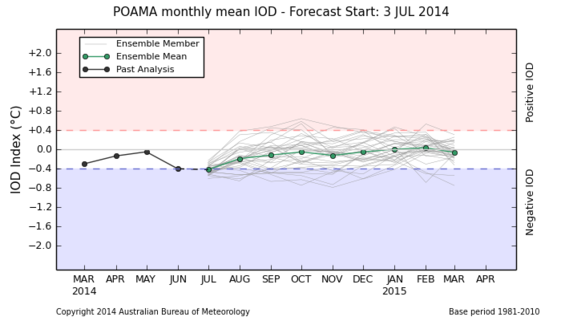 It has to be kept in mind that while an El Nino stalls the South West Monsoon, it usually acts as a stimulant for the North East Monsoon and that way,  El Nino’s effect at the annual scale is somewhat contained. If this year’s El Nino has indeed gone bust, then the outlook for NE Monsoon may not very rosy under ENSO neutral or La Nina conditions. Consequently, if the NE Monsoon cannot to some significant degree offset the shortfall of the SW Monsoon, the country within an annual scale can still end up with a significant rainfall deficiency.

Posted by Rajan Alexander at 1:33 PM