A cold snap in South America caused more than 100 deaths and still counting. According to various media reports:

- In Chile, the Aysen region suffered from the worst snowstorm in 30 years. The snow accumulation reached 5 feet in Balmaceda and the Army was called to rescue people trapped by the snow.
- In Argentina, the snow in the region of Mendoza, famous for its winery, described as the heaviest in a decade. The temperature in the morning of July 16th was the lowest in the city of Buenos Aires since 1991: -1.5C. The cold snap caused a record demand for energy and Argentina had to import electricity from Brazil. Many industries in Argentina were shut down due to gas shortage. It snowed in nearly all the provinces of Argentina, an extremely rare event. It snowed even in the western part of the province of Buenos Aires and Southern Santa Fe, in cities at sea level.

- In Bolivia, dozens of people died in consequence of the very low temperatures. In some areas of the nation, the cold period was described as the worst in 15 years. It even snowed in the Chaco of Bolivia, one of warmest areas of South America, where the local population never saw snow before

- The worst of the cold has been in southern Peru, where the Andes Mountains had temperatures drop down to - 23 degrees Celsius.

What is common in all these years is that these were all either La Nina years or a period global climate was transitioning from an El Nino conditions to a La Nina episode.


The Australian Met Department confirmed that the sub-surface of the ocean is now more than 4°C cooler than normal for this time of year in the central Pacific due to La Nina developments. However, this by itself cannot explain the cold snap. The main ice covered landmass in the Southern Hemisphere is Antarctica at the South Pole, accounting for 90-95% of the world's ice (and 70 percent of its fresh water). Antarctica is covered with ice, average 7,000 feet thick, and if completely melted would lead to sea levels to rise about 200 feet. Nevertheless, the average temperature in Antarctica is - 37°C, so the ice there is in no of danger of melting. In fact, in most parts of the continent it never gets above freezing.
The Antarctic Sea Ice by end of June in fact grew to record levels (marked in purple in the graphic). The Southern Hemisphere sea ice area narrowly surpassed the previous historic maximum of 16.03 million sq. km to 16.17 million sq. Read here. It means temperature has gone much lower than -37°C, possibly now around -60C and that net incremental ice area almost completely offset any loss ice from its northern counterpart the Arctic – keeping in check rise of sea levels globally. 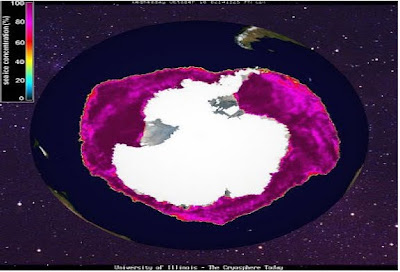 The Antarctic Oscillation (AAO) is a low-frequency mode of atmospheric variability of the southern hemisphere mid- and high latitudes consisting of a seesaw in atmospheric pressure between the Antarctic region and the southern midlatitudes and is associated with lower SST and sea ice anomalies. A peer reviewed study by Pohl et al found the following interlinks between AAO and La Nina:

“At the inter-annual time scale, a strong tele-connection with ENSO is found during the peak of the austral summer season, corroborating previous studies. El Nino (La Nina) tends to correspond to a negative (positive) AAO phase.”

June saw the second highest positive AAO anomaly in the historical record, second only to July 1979 – another La Nina year. Climatologists and weathermen attribute this extreme event of snow in South America to a pocket of low-pressure Antarctic air that found its way over South America. The outbreak began more than one week ago with biting winds out of Antarctica chilling southernmost Chile and Argentina, a land known as Patagonia.
As a result areas within the middle and high latitudes in the southern hemisphere are experiencing lower than average temperatures, if not record lows, be it much of  Latin America, Australia, New Zealand,  South Africa or Nambia. Since at the intraseasonal time scale, AAO shows most energetic fluctuations in the 30-60-day range, these conditions could well extend into beginning of September.

In April 2009, the UK Met Office predicted a barbeque summer in 2009. After the disappointments of 2007 and 2008, the British public were promised a scorcher of summer. The Met Dept ended up with mud on the faces as it turned out another disappointing summer. Faced with widespread public ridicule, this year they gave up seasonal forecasting only to find their barbequed summer materializing this year. According to various media reports:

• Russia's worst droughts in a century have destroyed almost 10 million hectares (25 million acres) of crops in central and European areas, authorities said. A state of emergency has been declared in 18 Russian provinces, where fire has engulfed more than 26,000 hectares (64,000 acres) of forest. Germany's Potato Industry Union, meanwhile, says it expects losses of 30 percent in this year's harvest. "The situation is worse in many places this year than in the drought years of 2003 and 2006," said Martin Umhau, the head of Germany's Union of Potato Industry. The Chamber of Agriculture of the Czech Republic estimates the grain harvest could by down by 10 percent compared with 2009.

• Meanwhile, drowning deaths were up in Eastern Europe as people flocked to seas, lakes and rivers in search of a break from the blistering heat. More than 230 people died in the last week alone across Russia, with 21 perishing over two weeks in Latvia, according to officials, who lamented the tendency of heavy drinking while sunbathing.

• The heat also took its toll on transport, with roads damaged and railway operators suffering. A major highway from Prague to Germany had to be closed for several days of repairs, and the Vodochody international airport north of Prague stopped accepting passenger flights after heat damage to the runway. In the Baltic state of Estonia, several churches were being used as heat shelters, particularly for the elderly.

The current heat wave in Europe is not unprecedented and it finds high correlation with La Nina years. While 2003 was the worst in recent history, 2008, was also a year with above-average temperatures all over Europe. A large geographical domain, including northwestern Siberia and part of the Scandinavian region, recorded a remarkably mild winter. January and February were very mild over nearly all of Europe. Monthly mean temperature anomalies for these months exceeded +7°C in some places in Scandinavia. In most parts of Finland, Norway and Sweden, winter 2007-08 was the warmest recorded since the beginning of measurements. In contrast, the boreal winter was remarkably cold for a large part of Eurasia extending eastward from Turkey to China. Some places in Turkey had their coldest January nights in nearly 50 years. This extreme cold weather caused hundreds of casualties in Afghanistan and China.

As in the past, the current heat wave sweeping across Europe has caused a significant reduction in Arctic ice. According to the newspaper "Moskovsky Komsomolets" in the zone of the Yenisei Siberia, the permafrost is, on average, ten meters thick; this year has already been melted to a depth of 3.5 meters, compared to a usual maximum of three meters at the end of summer. As the newspaper observed, there is a danger of Arctic falling to in 2007 (la Nina year) levels where in late summer it fell to 4.4 million square kilometres, compared to the norm of 8 million and 11 million in summer and winter.

The link of heat waves to La Nina was established by Chase et al in a peer reviewed study, published in Geophysics Research Letters, titled Was the 2003 European summer heat wave unusual in a global context? Read here. They found natural variability in the form of El Nino-Southern Oscillation (ENSO) and volcanism appearing much of greater importance than any general warming trend in causing extreme regional temperature anomalies. However, this by itself does not sufficiently explain the current extreme event.

The higher temperatures are caused partly by an interaction between a zone of low pressure in Western Europe and high pressure around the Mediterranean. What that does is to bring hot African air up over Europe. Partly it is caused by the Arctic Oscillation (AO), which is the Northern Hemisphere’s counterpart to AAO of the South Hemisphere. The AO is the pattern in which atmospheric pressure at polar and middle latitudes fluctuates between negative and positive phases. Diagrammatically as illustrated by NOAA, the positive and negative phases are depicted below:

US based Weather Services International, who correctly predicted last October that Europe would suffer a very cold start to 2010, had this to predict for the coming months:

“We expect the recent warm, dry weather across the eastern and southern mainland to continue into August, while the UK and Scandinavian temperatures run slightly above to slightly below normal. By September, the mainland heat will abate a bit, while Scandinavia experiences increasingly warmer temperatures, relative to normal. By October, the combination of a very warm Atlantic Ocean and an emerging La Nina event in the tropical Pacific will result in very mild conditions across Scandinavia and the eastern mainland, with below-normal temperatures confined to Iberia.”

As in other La Nina years, much of Europe will experience above normal temperatures in the coming months and possibly a milder winter too.

Global warmists had predicted the year 2010 as being the warmest in recorded history. The first half of the year put smiles on their faces, each month they derived sadistic pleasure on announcing to the world that new temperature highs were being recorded. The spread of red in NOAA’s temperature anomaly graph should make this evident.

The same NOAA temperature anomaly graph for July first week should quickly wipe the smug of their faces. Notice the sea of blue swamping the red that makes July obvious that global climate was flipping towards a much cooler world. Even in June, warmists claimed based on unreliable surface temperature data that how that global land and ocean surface temperatures were the highest since record keeping began in 1880.

The irony was that UAH (Satellite) temperature graph for January to June was clearly suggesting that global temperatures were in a declining trend, even when global warmists were in their full elements scaring the world that global warming was accelerating. From a near record high of +0.72C anomaly in January, it hit +0.44C in June. And if the trend continues, we should see a more pronounced fall this month with global temperature anomaly plunging within the region +0.3-0.2C. For the latest global (satellite), temperatures visit here. 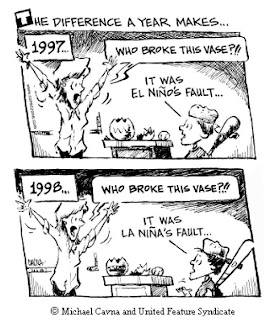 By October, the reds in the Northern Hemisphere – mainly SE of US, Europe and Arctic - can be expected to change to a cooler colour as  the heat wave is expected to  abate by then. This together with a drastic fall in Sea Surface Temperatures (SST) should see global temperature anomalies near zero. It is now evident that 2010 will not be the warmest in recorded history. Hopefully, by the time of the Climate meet in Cancun, we should see global temperature anomalies below their long-term mean as it regularly happens during a La Nina year. It will be then obvious to all that the theory global warming lies in shambles and run its course (scam).

According to IPCC, the theory is automatically falsified if there is an absence of warming trend for 15 years. Since 1998, there is no significant warming trend seen, this makes it 12 years where there is an absence of significant warming trend. There is little chance during the remaining three years that this trend will change. Temperatures usually spike during a moderately strong El Nino as just completed in April. The probability for a similar one is 12 years from now. More important, with the Pacific Decadal Oscillation (PDO) negative, there is little chance of runaway warming.