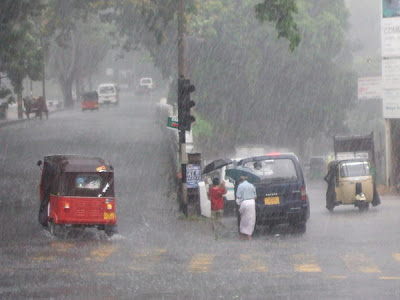 The idea that climate extremes are supposed to get more frequent and in intensity is one of the most omnipotent present manifestations of the climate doomsday religion.

Back in November 2009, there was an elevated cyclone (Phyan) alert over Mumbai, coinciding with high tides. The last time heavy rains and high tides combined almost as a lethal brew, resulting in unprecedented flooding that almost totally paralyzed the city. Hence the heavy media spotlight on the event. One popular English news channel had a Greenpeace activist on its panel discussion who apart from parroting this ridiculous claim made this remarkable statement:

"As a Mumbaikar, in my life time, I have alarmingly watched the increasing cyclone frequency trend in the West Coast!".

The problem was that this was something of a 22 year old making a statement wherein he considered his miniscule life span viz-a-viz earth's billions of year adequate enough to draw such a sweeping inference. In fact a few hours after he made this statement, the cylone alert was lifted for Mumbai city and the hysteria died as quickly. Actual empirical evidence indicates  that the frequency of cyclones and landfalls in the West Coast as compared to the East Coast of India has historically been very much lower. But this does not stop science illiterates of environmental organizations like Greenpeace in trying to whip up hysteria on climate change. There are of course decadal variations, but there is no definite long-term trend in the frequency or intensity of tropical cyclones. Hence, the spectre of tropical cyclones increasing alarmingly due to global climate change as portrayed in the popular media and even in some more serious publications, and by NGOs and environmentalists are pure myth as they do not have any sound scientific basis. A peer reviewed study by Raghavan S. and Rajesh S. (2003) published in Bulletin of the American Meteorological Society 84: 635-644 illustrates this in the clearest terms. We provide extracts of the review of this study by a climate blog CO2 Science:

"There was a significant decreasing trend (at the 99% confidence level) in the frequency of cyclones with the designation of "cyclonic storm" and above, and that "the maximum decrease was in the last four decades," citing the work of Srivastava et al. (2000).

They additionally note that Singh and Khan (1999), who studied 122 years of data, also found "increasing damage due to tropical cyclones over Andhra Pradesh, India, is attributable mainly to economic and demographic factors and not to any increase in frequency or intensity of cyclones."  Hence, they find that "inflation, growth in population, and the increased wealth of people in the coastal areas (and not global warming) are the factors contributing to the increased impact."

The Raghavan S. and Rajesh S. study is consistent with Dr. Ryan Maue, who maintains the Florida State University dataset on Accumulate Cyclone Energy (ACE) illustrates ACE is at a 30 year low in 2010 as seen in the graph above. The World Meteorological Organization (WMO) and National Oceanic and Atmospheric Administration (NOAA) are the two leading climatic research establishments that are dismissive of the claims that tropical cyclones and hurricanes are increasing and intensifying in trends as seen by these links:

The Twentieth Century Reanalysis Project is the latest attempt by the climatologist research fraternity to seek a conclusive answer to this question whether weather extremities are on the rise. The project by using super-computers generated a dataset of global atmospheric circulation from 1871 to the present. As the extract of the Wall Street Journal in its article, The Weather Isn’t Getting Weirder illustrates, the project’s initial findings, published last month, show no evidence of an intensifying weather trend:

“In the climate models, the extremes get more extreme as we move into a doubled CO2 world in 100 years", atmospheric scientist Gilbert Compo, one of the researchers on the project, tells me from his office at the University of Colorado, Boulder. So we were surprised that none of the three major indices of climate variability that we used show a trend of increased circulation going back to 1871.”


In other words, researchers have yet to find evidence of more-extreme weather patterns over the period, contrary to what the models predict. There’s no data-driven answer yet to the question of how human activity has affected extreme weather,” adds Roger Pielke Jr., another University of Colorado climate researcher."

The World Bank joined the bash by publishing its new paper (Read here)  in the Global Facility for Disaster Reduction & Recovery (GFDRR), virtually rubbishes the claim of increasing damage on account of  weather extremities  as given by the Stern Report, UK (2006). The latter report is much used by NGOs and environmentalist organizations to buttress their case that "time is running out for a climate treaty". Here we provide extracts of this report:

"Given empirical evidence about the link between climate and damages, climate change is calculated to increase the damages from these five extreme events by between $11 and $16 billion a year by 2100. There is little supporting evidence that climate affects deaths from these events (except for the possibility of local storm deaths increasing)....These values are completely consistent with estimates in the literature per extreme event. However, they are completely inconsistent with values stated by Stern (2006) who suggests that extreme event damages could be 0.5 to 1.0 percent of GWP by 2050. Oral statements by Lord Stern even suggest values as high as 5 percent of GWP by 2200.

The Stern analysis has been criticized because it confuses changes caused by what is in harms’ way (baseline changes) with what is caused by climate change (Pielke 2007b). But even this mistake cannot justify the estimates by Lord Stern. The hypothesized damages quoted by Lord Stern are completely inconsistent with empirical evidence....Using the minimum pressure damage model, the estimated impact of climate change on tropical storm damages ranges from $28 to $68 billion USD/yr (0.005 to 0.012 percent of GWP) by 2100. This represents an increase of between 50 percent and 122 percent over future baseline levels. Climate change is expected to double the damages from tropical cyclones by 2100 by $54 billion USD/yr. The findings confirm the results of earlier tropical cyclone studies that relied on cruder methods."

With the volume of empirical data as well as theoretical analysis of the climate all contradicting the thesis that weather extremities are increasing, climate alarmist scientists have apparently held up the white flag. Gavin Schmidt, a prominent NASA climate scientist with their Goddard Institute of Space Studies (GISS) who also administers the blog RealClimate.org admitted in his blog the following:

1. There is no theory or result that indicates that climate change increases extremes in general. 2.  Attribution of extremes is hard

Last year, The Sunday Times exposed a controversy to the IPCC's 2007 report in which a separate section warned that the world had "suffered rapidly rising costs due to extreme weather-related events since the 1970s". It suggested a part of this increase was due to global warming and cited the unpublished report, saying:

"One study has found that while the dominant signal remains that of the significant increases in the values of exposure at risk, once losses are normalised for exposure, there still remains an underlying rising trend."

The Sunday Times has since found that the scientific paper on which the IPCC based its claim had not been peer reviewed, nor published, at the time the climate body issued its report.

Now that the thesis that climate change is inducing more weather extremities have been firmly debunked, this has left prominent NGOs and environmentalists red-faced, their credibility of their advocacy programmes in tatters. We give some of the links that lest we forget what they had said in the past:

OXFAM:  "A newly released Oxfam report is blaming global warming for the four-fold increase in the number of weather-related natural disasters - primarily floods and storms - in the last two decades, alleging that the number has jumped from about 120 per year during the 1980s to roughly 500 per year now. These disasters have exerted a disproportionate impact on the world's poorest, the report goes on to say, affecting more than 250 million people in South Asia, Africa and Mexico this year alone.

This figure itself represents a 70% increase above average 1985 - 1994 levels, when about 174 million people were affected by natural disasters. Appealing to the U.N.'s members ahead of the Convention on Climate Change in Bali, Oxfam director Barbara Stocking warned that humanitarian assistance will be overwhelmed and recent advances in human development will go into reverse, unless immediate action was taken."

CHRISTIAN AID:"Climate change is unequivocally taking place and some of the poorest people in the world are already suffering from its effects. Higher global surface temperatures and sea level rises are contributing to increasing frequency and intensity of extreme weather events, with disastrous effects on individuals and governments in developing countries"

ACTIONAID: "The threat of climate change means the frequency and intensity of extreme weather events will increase worldwide.  The number of disasters, and those affected by them in the developing world, is already steadily rising. With each new disaster, precious gains in poverty eradication are lost or severely set back."

GREENPEACE: "There is strong evidence that extreme weather events - such as hurricanes, floods, droughts and heat waves - are increasing because of climate change. In fact, the Financial Initiative of the UN Environment Program (UNEP) recently calculated that the economic costs of global warming are doubling every decade. The cumulative number of people affected by disasters rose to two billion in the 1990s, up from 740 million in the 1970s. Virtually all of these millions were concentrated in poorer countries."

WWF: "Climate change is directly affecting each and every one of us and threatens significant physical and economic harm.  While no single storm can be directly attributed to climate change, the scientific evidence clearly shows that as the climate warms, extreme weather events will become more intense and more frequent."

Posted by Rajan Alexander at 12:31 PM