MANALI: Record snowfall in Himachal this year has revived more than 2,000 glaciers.

Almora's G B Pant Institute of Himalayan Environment and Development's senior scientist J C Kuniyal said apart from reviving the glaciers , this year's record snowfall would also boost the crop cycle. "It is difficult to understand the environment. As we start talking about the dry winters, record snowfall leaves stunned everyone," he said.

He cautioned that unequal snowfall remains a matter of concern. But Lahaul-Spiti has received more than 175-cm snow in first 16 days of February, breaking the earlier record of 148-cm for the month in 1998.

To note, these 2,000 glaciers are only on the Himachal Pradesh side of the Himalayas and does not include other states like Jammu & kashmir and other countries like China, Afghanistan and Pakistan where the snowfall has been as severe or more!

Wonder why a senior climatologist should admit being stunned by record snowfall this year?  This blog has been regularly warning of such a prospect linked with a strong La Niña from July last year! 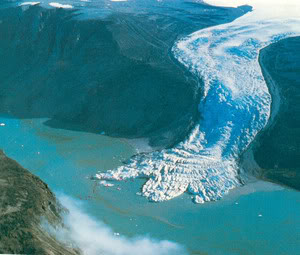 This was one of the Photoshop manipulated computer images the so called Climate Justice Network of environmentalists and NGOs used to try to whip up mass hysteria to the run-up to the Copenhagen Climate meet. Their design was to put pressure on the Indian government to sign a global climate treaty.

You can bet the members of the so called Climate Justice Network will be silent of Himalayan Glacier revival. Why? They knew it all along that their campaign  was based on a lie. Just as global temperatures go up and down, so do glaciers expand and retreat. Despite touting themselves as environmentalists, these organizations apparently do not appreciate natural cycles.

These foreign funded environmental organizations and NGOs had claimed that the Himalayan glaciers that are the source of the rivers like the Ganges could disappear by 2030 as temperatures rise making global warming the greatest threat to the Ganges. They attempted to create mass hysteria by further claiming that this in turn will threaten South Asia’s fresh water supply.

The World Wildlife Fund even listed the Ganges among the world’s ten most endangered rivers. In India, the Ganges provides water for drinking and farming for more than 500 million people. But last summer’s floods in northern India has amply illustrated that capacity of these rivers are not so dependent on glacier melt than on the monsoon.

In November 2009, Jairam Ramesh had released a report by glaciologist V.K. Raina claiming that Himalayan glaciers are not all retreating at an alarming pace. It had been disputed by many Western scientists, while IPCC chairman R.K. Pachauri dismissed it as “voodoo science.” The so called "climate justice activist movement” then rose up as one body to the IPCC defense. However, Dr. Raina was later vindicated by the IPCC’s own retraction of its claim that the Himalayan glaciers would melt by 2035, which was slap to the credibility of the movement.

Posted by Rajan Alexander at 10:27 PM