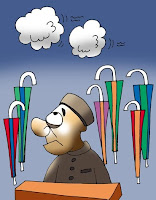 The UK Met Office has now become globally a butt of jokes, after predicting a "barbecue summer", three years in a row and proved wrong in all three occasions - their global warming bias proving their Waterloo. Such as been their loss of public confidence that they have given up seasonal forecasting altogether.

The India Meteorological Department (IMD) is faring no better. Using the same IPCC’s statistical modelling techniques, IMD in April predicted the current monsoon season's rainfall at 98 per cent of Long Period Average (LPA) and then revised it downwards to 95 per cent on June 19 and further to 92.5 per cent on  August 1 while further  suggesting a below normal' rainfall of 90 per cent for August-September.

But as on September 15th, the country received more than 103 per cent rainfall of the LPA. Rainfall was fairly well distributed with only four of the 36 meteorological sub-divisions recording moderately deficit.  The rainfall IMD map shows Rajasthan, West Madhya Pradesh, Saurashtra, Kutch and Diu, Konkan and Goa, coastal Karnataka and Uttarakhand receiving excess rainfall, while 24 sub-divisions getting normal rains. Last month was, indeed, the wettest August in 15 years with nearly 10 per cent surplus rains, while amounting to 123 per cent of LPA for the first two weeks of September.

South Asia experiences monsoon rains from June to September, which are vital for its agriculture. But above average rains can cause widespread floods as seen this year. 16 million people have now been affected by flooding caused by heavy and sustained monsoon rains falling across south Asia. The floods have caused massive displacement of populations across Pakistan, India, Bangladesh and Nepal and brought widespread destruction to homes, livelihoods and agricultural cropland. In India, an estimated  5.2 million people in the worst hit areas of Bihar, Uttar Pradesh and Assam in the northeast of the country have had their lives disrupted by the flooding, which was sparked by incessant rains that caused burgeoning rivers to overflow and embankments to breach. 158 people have died so far, mainly due to drowning.

Normally, withdrawal of monsoon from west Rajasthan starts around September 1 but it is yet to do so this year. The withdrawal is usually complete by around mid September. The late monsoon withdrawal may mean wet conditions are here to stay till the month end. The Australian Bureau of Meteorology (BoM) has said in the latest update that a rain-friendly Madden-Julian Oscillation (MJO) wave is in the process of transiting the Indian Ocean from west to east.

The Climate Prediction Centre (CPC) of the US National Weather Services meanwhile said in its latest outlook for the week beginning on Wednesday that an enhanced monsoon flow is expected to enhance rainfall in northern India, the Bay of Bengal and Southeast Asia. This is being attributed to the sustained above average sea surface temperatures over the western equatorial Indian Ocean that helps convection (process of cloud building).

"A strong cross equatorial flow around Arabian sea in the second week of July played an important role in causing rainfall. This is being attributed to the sustained above average sea surface temperatures over the western equatorial Indian Ocean that helps convection (process of cloud building).” 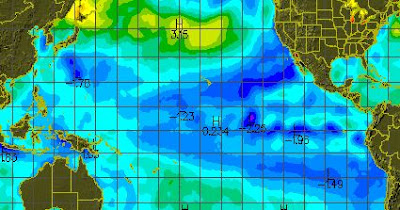 “The IMD should, perhaps, shed its fetish for statistical (extrapolation of historical data) forecast models over dynamical ones based on real-time physics of atmospheric fluid flows. The disparity is best brought home in the way the IMD dismissed, as recently as in August, the possibility of a crucial La Niña event developing in the East Pacific — which dynamical models had been harping on for months together.”

Last year’s La Niña accounted for the good rains in India and the drought in East Africa. During El Niños, the reverse applies with India tending to experience drought and East Africa floods. Both cycles alternate once in 3-5 years. The in-between phase is described as El Nino-Southern Oscillation (ENSO) neutral conditions. The La Niña is the alter ego of El Niño a naturally occurring climate phenomenon located over the tropical Pacific Ocean and results from interactions between the ocean surface and the atmosphere.

During La Niña, cooler-than-average Pacific Ocean temperatures influence global weather patterns, resulting in temporary global cooling.  The strong 2010-11 La Niña contributed to record winter snowfall, spring flooding and drought across the United States, as well as other extreme weather events throughout the world, such as heavy rain in Australia and an extremely dry equatorial eastern Africa.

La Niña typically occur every three-to-five years and lasts normally for nine months with back-to-back episodes occurring about 50 percent of the time. Last year’s La Niña surfaced around May and predictably disappeared by April this year. Most of the long range forecast from reputed climate research centres had negated the re-emergence of the La Niña after the boreal (northern hemisphere) summer and predicted ENSO neutral conditions. The IMD followed suit and ended up with mud on their faces.

This blog in contrast had taken the contrarian position, predicting a multi-year La Niña as far back as October 9 2010 through our post: Now, the Monster of a La Niña Confirmation???  We had then forecasted that the La Niña of 2010-2011 would take a break during the boreal summer and re-emerge by fall only to intensify by northern hemisphere winter.  Our reasons were based on the following:

a.    Analysis of historical data indicates that a multi-year La Niñas tended to occur whenever its first phase onset was rapid and its strength, strong. The 2010-2011 La Niña was one of the strongest in recorded history and also one of its rapidest.

b.    We tracked the NCEP/CFS forecast, based on dynamic models, which was one of the first to declare the onset of the 2010-2011 La Niña and predicted a high probability for a multi-year La Niña.

As we expected, the La Niña is back and now it is official. The US, National Oceanic and Atmospheric Administration (NOAA) have announced that La Niña has re-emerged in the Pacific Ocean and is expected to gradually strengthen and continue into the Northern Hemisphere’s winter. 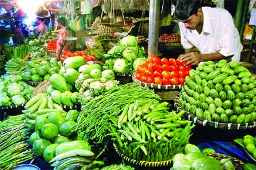 But this is bad news for NGOs like Oxfam whose CEO, Barbara Stocking was quoted in their latest report “Growing a Better Future in a Resource Constrained World”  made the shocking comment that  "The food system is pretty well bust”. Stocking’s NGO claims that it is all because of climate change and making it imperative for agriculture to contribute its mite to reduce its carbon footprint.  Read more: OXFAM morphs into a Paul Ehrlich clone: Claims world faces mass starvation!

The good monsoon this year has boosted the prospects of Kharif harvest. According to the government data, following good rains in most parts of the country so far, the area under cultivation under all major crops has shown a significant rise this year compared with the last year. Higher area and well distributed rainfall will help India achieve its target of increasing its food grains output to an all time record 245 million metric tons. All crop production is expected to be up except for pulses, coarse cereals and groundnut output.

Since publication of their report: “Growing a Better Future in a Resource Constrained World” and making the flustering claim that "The food system is pretty well bust”.

2011-12 would be the second consequent year India would be recording an all time bumper harvest! If climate change causes farms to go bust, and if this is the outcome, Indians should be rejoicing to demand “Let’s have more of it!”