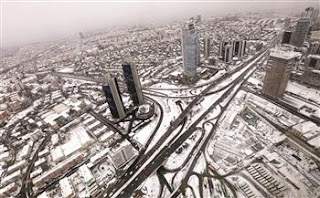 The state offices in Istanbul were shut down at 3 p.m., while the Trans European Motorway (TEM) was partly closed down due to extreme snowfall on the highway and ensuing traffic accidents. Sea transportation was also disrupted as many ferry trips were canceled.

A total of 71 traffic accidents occurred in Istanbul yesterday before the Daily News went to print, killing one person and injuring 22 others. Istanbul’s Disaster Coordination Center (AKOM) announced it increased its alert status to “red,” the highest alert level.

The General Directorate of Meteorology recorded the temperature in Istanbul as minus 8 degrees Celsius in the Çatalca district, making the day the coldest since 1979.

In the eastern province of Kars the temperature was recorded at minus 26.9 degrees yesterday, while temperatures in the capital city Ankara were expected to fall to minus 15 degrees in the next couple of days.

The weather also affected air transportation with 190 flights at Istanbul’s Atatürk International Airport canceled. Atatürk Airport Director Celal Özuğur said airline companies had called off the flights but runways had remained open at the airport. The cancelations occurred due to the de-icing of airplanes before take-off, Özuğur said.

AKOM said municipal personnel worked through the night to keep the city’s roads free of snow and ice, while the public transportation authority added 350 extra buses yesterday to compensate.

Snowfall was expected to continue today and tomorrow in the Marmara region, before moving to the Aegean region, especially the northwestern province Çanakkale. Officials warned citizens not to leave their houses unless necessary and to use public transportation instead of personal cars.

Meanwhile, a Palestinian man has died of hypothermia after he and other illegal immigrants were stranded on an islet in the middle of Evros River on the Greek border, the Associated Press reported yesterday.

The report said 14 others in the group, from several countries including Syria and Eritrea, were rescued from the Evros River and hospitalized for observation.

Posted by Rajan Alexander at 11:10 AM