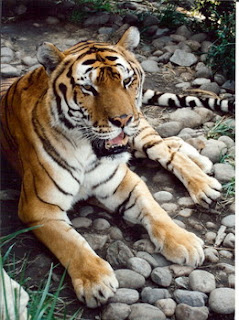 The National Tiger Conservation Authority of India says the country’s tiger reserves, also called tiger parks, provided a protected area for the animals. In recent years, resorts and villages were set up on the perimeters as viewing tigers became a tourist industry.

The point of ecotourism is to show tourists a natural environment with minimal impact to the area. Toby Sinclair, Vice President of the Ecotourism Society of India, told CNN he believes the government is allowing too many tourists to enter the parks. He would like to see more regulation.

“The eco in ecotourism has changed to economy,” Sinclair told CNN.

The Indian Supreme Court placed a temporary ban on tiger parks and will close them to the public indefinitely. The court wants to investigate whether or not this is happening in tiger habitat areas. Today, the Supreme Court ordered the ban to continue indefinitely.
This is a blow to the World Wildlife Fund, now known as WWF who are the biggest tiger tourism operators in India. One of the their biggest money spenders has come to a grounding halt due to this court order.

Posted by Rajan Alexander at 3:13 PM