If warming leads to more storms, what explains the storms in cold South Africa? 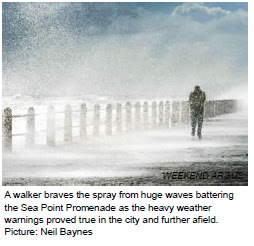 (South African, Post), Heavy rain and gale-force wind destroyed 900 shacks in Cape Town and left thousands of people across the Western Cape without power on Saturday.

Trees were uprooted, snow fell heavily in the Ceres area and on other high ground in the province, and Chapman’s Peak Drive was closed.

The NSRI (National Sea Rescue Institute) said swells of up to nine metres were expected overnight.

Last night, Cape Town weather forecaster Nick Koegelenberg said the weather was clearing, but that another cold front would hit the Cape on Tuesday and

“it seems it’s going to be severe”.

Jacquiline Pandaram, the director of the Western Cape Disaster Risk Management, said that minor rockfalls had been reported at the Tyger Valley Waterfront.

Trees had been uprooted in Worcester and stormwater drains were blocked in Stellenbosch and Paarl. Roberto Blaisi from the Haven Night Shelter in District Six said they had between 30 and 50 walk-ins on Saturday night.

“Most of the homeless came in to escape the rain. They usually sleep under bridges or bushes or whatever shelter they can find, but this weekend’s rain and wind was too much for them.

“We provided shelter and meals and blankets to those we could and transferred others when we were full. We expect the numbers to continue to rise until the bitter weather subsides,” Blaisi said.

“Thick snow is falling. We had to postpone a wedding planned for today. We had to tell hikers who wanted to go into the mountain they couldn’t go because it was freezing.

The wind was pumping the whole night, but there was no rain. Yesterday at 6am it started raining and it turned to snow from 8am,” De Kock said.

Posted by Rajan Alexander at 2:00 AM