A new peer reviewed study by McShane and Wyner 2010, published in Annals of Applied Statistics has falsified the Hockey Stick graph, as found in the UN’s Intergovernmental Panel on Climate Change (IPCC)’s Third Assessment Report' (TAR-2001). Why this graph is important is that it was touted as the very foundation of Anthropogenic Global Warming (AGW) theory.

The United Nations Environmental Program (UNEP) and its offspring the IPCC were orchestrated to achieve the goal of convincing public and policy makers that warming and climate change were a human created disaster. To the run-up of IPCC TAR 2001, the politics and hysteria about climate change had risen to a level that demanded clear evidence of a human signal. By now, an entire industry had developed round massive funding - academics, politicians, bureaucrats, green energy companies, carbon traders, environmental organizations and NGOs. However, the IPCC just did not have the evidence.

Then came along a PhD student, from the University of Massachusetts, named Michael Mann in 1998, who conjured up a hockey stick graph (called MBH98) using tree-ring proxy data.  Such a blatantly a historical effort that practically overturned climate knowledge would have only raised eyebrows under ordinary circumstances, but it turned out to be just what the UN wanted - proof that global warming was unprecedented!

It summarized Northern Hemisphere climate in terms of a temperature index that trails down slightly at a negative rate until you get to about 1900 and then it begins this dramatic series of jumps up to 1998. Therefore, this was called the “hockey stick graph." 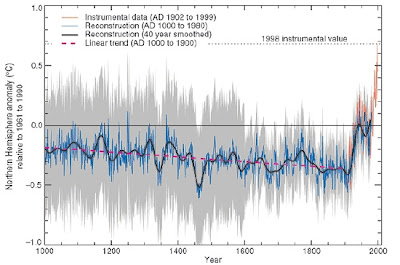 The IPCC made the hockey stick the centerpiece of IPCC TAR 2001. This graph was plastered all over the report. It occupied a very prominent and central place in the Summary for Policymakers, it is shown twice in the Assessment Report in Chapter 2, it is shown twice in the Synthesis Report, and it leads to their conclusions: temperatures in the latter half of the twentieth century were unprecedented.

It was so integral to these conclusions from the Intergovernmental Panel on Climate Change to enable it to claim that the 1990s were unusually warm compared to the millennium as a whole. This was  based on just a couple of academic papers, and one, published in 1998 in Nature by Mann, Bradley and Hughes, one published the year after in Geophysical Research Letters by the same group of authors, which was an extension of their Nature paper. In addition, more importantly, these same individuals were included in the panel of scientific reviewers that constituted Chapter 2 - they quoted their own research as the final adopted by IPCC TAR 2001! [Summary for Policymakers' (SPM),  is the only part of the report they will take any serious note of.]

Bill Clinton also used it as the centre piece of his 2000 National Report on Climate Change. The government of Canada sent a copy of the graph to every household in the country. Al Gore made it the clinching evidence in his documentary “An Inconvenient Truth”. In the end, the IPCC appointed Mann editor of its Journal of Climate -- not bad for a lowly PhD student. Mann now works for University of Pennsylvania. Mann’s professional career took a mercurial rise ever since.

Because of the centrality of Hockey Stick graph in AGW, it made climate alarmism extremely vulnerable as once you falsify the graph, you falsify the whole theory of AGW.  However, that was what two Canadians - a statistician Steve McIntyre and an economist, Ross McKitrick - exactly did in 2003. In a stunning scientific paper just published in Energy and Environment, the infamous `Hockey Stick'  was been comprehensively discredited - using the same data sources and even methodology used by the Hockey Stick's original authors. According to McIntyre and McKitrick:

"The data set of proxies of past climate used in Mann, Bradley and Hughes (1998, “MBH98” hereafter) for the estimation of temperatures from 1400 to 1980 contains collation errors, unjustifiable truncation or extrapolation of source data, obsolete data, geographical location errors, incorrect calculation of principal components and other quality control defects.

We detail these errors and defects. We then apply MBH98 methodology to the construction of a Northern Hemisphere average temperature index for the 1400-1980 period, using corrected and updated source data. The major finding is that the values in the early 15th century exceed any values in the 20th century. The particular “hockey stick” shape derived in the MBH98 proxy construction – a temperature index that decreases slightly between the early 15th century and early 20th century and then increases dramatically up to 1980 — is primarily an artefact of poor data handling, obsolete data and incorrect calculation of principal components."

McIntyre and McKitrick challenged the `Hockey Stick' on its own turf by subjecting it to an `audit’, using the same data and assumptions, and developing a temperature reconstruction from similar principles.  It was a classic replication exercise, so necessary in science.  The result is shown below: 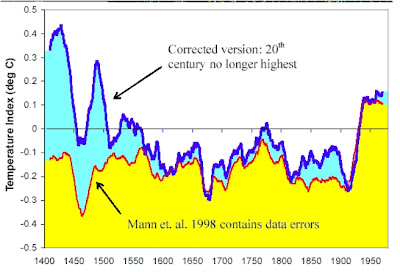 Not only did the `Hockey Stick' fly in the face of a mountain of evidence from other sciences which contradicts its conclusions, but McIntyre and McKitrick, exposed the Hockey Stick as being statistically flawed as well, since its own data sources, properly read, do not support its conclusions either.
More importantly, McIntyre and McKitrick gave fire and momentum to the climate sceptic movement who never looked back after this. From then on, climate alarmist was on the back-foot defending their science. Their war cry was

That is until now. McShane and Wyner’s paper is a direct and serious rebuttal to the proxy reconstructions of Mann. It seems watertight on the surface, because instead of trying to attack the proxy data quality issues, they assumed the proxy data was accurate for their purpose, then created a Bayesian backcast method. Then, using the proxy data, they demonstrate it fails to reproduce the sharp 20th century uptick. The truth always gets out and here it is:

A Statistical Analysis of Multiple Temperature Proxies: Are Reconstructions of Surface Temperatures Over the Last 1000 Years Reliable? 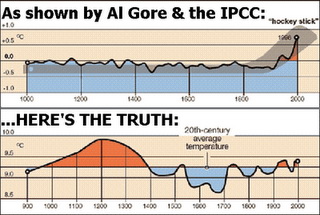 As taught in certain introductory science classes, pseudoscience is any subject that appears superficially to be scientific, or whose proponents state that it is scientific, but which nevertheless contravenes the testability requirement or substantially deviates from other fundamental aspects of the scientific method. The philosopher Karl Popper wrote that science often errs and that pseudoscience can stumble upon the truth, but what distinguishes them is the inductive method of the former, which proceeds from observation or experiment, and that its theories are falsifiable.


Suppose we observed something.  How do we know it is right?  How do we know we observed it correctly? Or wrote it down correctly?  Or there wasn't something else happening that we didn't notice that messed up your observation? This is the second important part of science: replication. Do it again. If we observe something, and we describe what we did and other people can repeat our experiment and observe the same result, then we can conclude we have correctly observed what is true. The McShane and Wyner did just that - proved Mann’s experiment cannot be replicated using the same data and method. It not only falsified the experiment but since the hockey stick was central to the AGW theory, it also falsifies the latter. If the confidence in the science cannot match the pain of solution, then the AGW falls off the public agenda.


Posted by Rajan Alexander at 1:45 AM