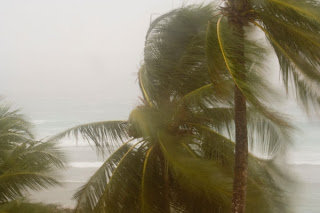 This summer of disasters, triggered by La Nina on a global scale, had been largely accompanied by huge socio-economic losses and wide-ranging weather anomalies. This barrage of recent natural disasters around the world highlights our vulnerability to the forces of Nature.

However, all these could well turn out to be simply a sampler to the main disaster season that is probably coming during the last quarter of the year.

Specific to Austral-Asia, it means during the remaining quarter of the year, the monsoons are likely to get even more re-invigorated with increased potential for tropical cyclone development in the region. Apart from South Asia, countries in South China Sea and Indo-China should gird themselves for elevated disaster threats beginning next month (September). Above‐average rains, particularly if the rains continue beyond September, could increase the risks of flooding, flood damage, soil erosion, and seasonal susceptibility to disease (malaria, dengue and waterborne diseases)

The European Centre for Medium-Range Weather Forecasts (ECMWF) tends to support this outlook signalling fresh convergence of flows over the South Peninsula from August 30 (next Monday). The ECMWF sees the possibility of development of a follow-up low-pressure area (aside of the prevailing one in West-central Bay of Bengal basin) and at least two tropical storms over the Northwest Pacific during this period.

This appears not at all good news for the Commonwealth Games in New Delhi in early October.  However, the mystic of India lies in our unpredictability and we could well weather it all with great aplomb  and surprise to all in the end. New waves of monsoon storms can continue to prolong the agony of flood victims in Pakistan. The Atlantic hurricane season, expected to kick in by last week of August, cast its shadow on the ongoing rehabilitation of earthquake victims in Haiti.  Mumbai has a good chance of being submerged a la 2005, as all it takes is high tides to combine with high rainfall. The rainy season opens in South China Sea countries like Philippines and Indonesia with satellite images showing huge convective clouds over the region, suggesting the region is one with high disaster vulnerability in the coming days.

There are a number of climatic players involved and when they come together and reinforce each other, they could cause a wide variety of weather extremes and consequently natural disasters at an unprecedented global scale. In particular, La Nina event and a strong Madden-Julian Oscillation(MJO)  — a weather pattern featuring thunderstorms and heavy rainfall that travels around the equator — are expected to create an unusually active severe weather season. There is also the impact of the more recently discovered Indian Ocean Dipole (IOD) that superimpose on the latter. We give a short description of the influences of these oceanic climatic phenomena:

Globally, the most significant anomaly in weather patterns this year is the ongoing shift from El Nino to La Nina conditions. According to long-term forecasts of Tokyo-based Research Institute for Global Change (RIGC), the prevailing La Nina condition would be more long lasting than thought earlier and may continue until early 2012. A 24-month La Nina condition or more should more than adequately offset the kind of global warming brought about a relatively strong El Nino 2009/10.

The IRI also found elevated probabilities of the La Nina favourably impacting not just the ongoing south-west monsoon but the subsequent northeast monsoon as well. As for expected rainfall trends for September-October-November, the IRI assessed as high the probabilities for excess precipitation for the entire western half of the country except the south-west Coast and North India (Jammu and Kashmir, Punjab, Haryana, Himachal Pradesh and Uttar Pradesh) where it would be normal. During October-November-December, the north-west is expected to see the advent of the seasonal winter with a largely normal rainfall pattern. 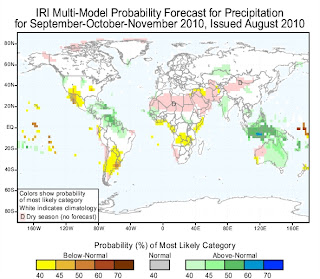 Accordingly, this year would be one of the rare years in India where rainfall is experienced almost continuously from June to December, which enables bumper agricultural production in all three cropping seasons. Discounting flooding damages, economists are predicting between 5-6% growth rate in agriculture production for fiscal 2010/11 that should catapult the country’s GDP near 10%.

[Note: Kharif crops are usually sown with the beginning of the first rains in July, during the south-west monsoon season. The term Kharif means "autumn". The Rabi crop is the spring harvest also known as the "winter crop. In between the Rabi and the Kharif seasons, there is a short season during the summer months known as the Zaid season.]

Other oceanic oscillations like a negative Pacific Decadal Oscillation (PDO) and  Antarctic Oscillation (AAO) act in tandem to reinforce the La Nina effect as seen similarly during the 1998 and 2008 La Nina seasons. The Arctic Oscillation (AO) has a significant influence on winter weather in the U.S. — the northern and eastern U.S., especially — as well as Western Europe. Recent research has also demonstrated a link between the AO and tropical cyclone formation during the Atlantic hurricane.


The Australian Bureau of Meteorology (BoM) has said that the next active phase of the MJO wave would develop over West Indian Ocean from early to mid-September. 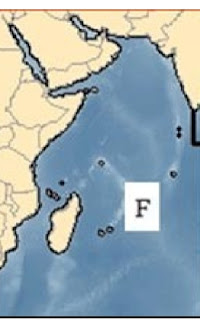 The MJO is an equatorial travelling pattern in Earth’s atmosphere - a cyclical pattern of slow, eastward-moving waves of clouds, anomalous rainfall and large-scale atmospheric circulation anomalies that can strongly influence long-term weather patterns around the world. According to the BoM, MJO has had perhaps the greatest influence on weather across southern Asia. The MJO sometimes stalls, weakens, or suddenly regenerates making forecasting a challenge.

The MJO has a periodicity typically ranging from 30-60 days, involving variations in wind, sea surface temperature (SST), cloudiness, and rainfall. It creates large-scale conditions, which are known to favour tropical storm genesis bringing with it, increased moisture and weakening wind shear. Alternating between a vast province of moist, stormy air and an unusually dry patch, the oscillation slowly blows through the tropics, often circling the globe several times.

Over the last week, the MJO has begun to progress into the Maritime Continent (Southeast Asian region comprising islands, peninsulas and shallow seas) for the first time since May. The MJO has a modulating effect on hurricane activity in the Indian Ocean, the western and eastern Pacific and Atlantic basin. The MJO contributed to the development of a named tropical storm ‘Mindulle' in the South China Sea, which since had made a landfall in Vietnam.

Although the MJO signal is strongest in the Indian and western Pacific Oceans, where it increases the intensity of the Austral Asian monsoon system, it seems to affect the entire tropical troposphere. It has been estimated that up to one-half of seasonal variance experienced in the western Pacific Ocean is attributable to the MJO.

The MJO tends to be most active during El Niño-Southern Oscillation (ENSO) neutral years, and is often absent during moderate-to-strong El Niño and La Niña events. The MJO activity during late 2007 and early 2008, which occurred during La Niña conditions, is unusual but not unprecedented. We are witnessing a repeat of La Nina 2008/09 - an active MJO and moderate-to-strong La Niña conditions. There is evidence that the MJO influences the ENSO cycle. It however does not cause El Niño or La Niña, but can contribute to the speed of development and intensity of La Niña episodes.

The MJO affects precipitation over the tropical monsoon regions. It also affects the winter jet stream and atmospheric circulation in the Pacific/North America region, causing anomalies that can lead to extreme rainfall events. It can also change summer rainfall patterns in Mexico and South America and accentuating La Niña influences.

The anomalous rainfall is usually first evident over the western Indian Ocean, and remains evident as it propagates over the very warm ocean waters of the western and central tropical Pacific. This pattern of tropical rainfall then generally becomes very nondescript as it moves over the cooler ocean waters of the eastern Pacific but reappears over the tropical Atlantic and Indian Ocean. The wet phase of enhanced convection and precipitation is followed by a dry phase where convection is suppressed. Each cycle lasts approximately 30-60 days. It is also known as the 40-day wave (or 30-60 day or 40-50 day oscillation).
The impact of the MJO is well explained by a climate blog called Actionnewsjax.com:

“In the simplest terms, the brown areas are sinking air while the green areas indicate upward vertical motion which often enhances thunderstorms & can boost tropical development.  Brown contours cover much of the Pacific & notice the lack of convection (blue, yellow & red areas).  Neutral to green contours cover the extreme East Pacific eastward across much of the Atlantic.

What really stands out is the massive area of green contours over the Asian continent and note all the thunderstorms.  This area correlates closely with the now very active Asian monsoon including the massive flooding in Pakistan.  Indications are that green contours -- upward motion, in other words, will be overspreading the Atlantic Basin in the coming weeks.  This coincides with the Madden/Julian Oscillation (MJO) which will become favourable for tropical (cyclone) development.”

The Indian Ocean is the third largest ocean, representing approximately 20% of global surface waters. It’s obviously impacted by neighbouring oceans: the Atlantic, Pacific, and Southern Oceans. It shares the Indo-Pacific Warm Pool (aka Pacific Warm Pool) with the Pacific.
The Indian Ocean is unlike the Atlantic and Pacific Oceans in one major detail; the Northern Hemisphere portion of the Indian Ocean is very much limited in size, while the Atlantic and Pacific Oceans extend northward to interact with the Arctic Ocean. Yet, for long Indian Ocean was treated as playing a subordinate role to the "king of climate variations," viz.  El Niño Southern Oscillation (ENSO) phenomenon in the adjoining tropical Pacific. The discovery of an ocean-atmosphere coupled mode named the "Indian Ocean Dipole mode" (IOD) by an Indian scientist named Saji Hameed radically changed prevailing paradigms on the role of the Indian Ocean in the world climate variability. ' 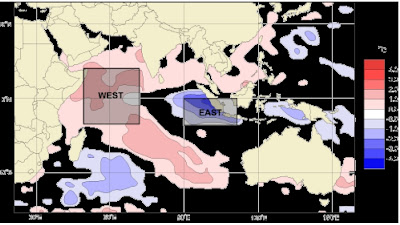 The IOD is commonly measured by an index that is the difference between sea surface temperature (SST) in the western (50°E to 70°E and 10°S to 10°N) and eastern (90°E to 110°E and 10°S to 0°S) equatorial Indian Ocean. The index is called the Dipole Mode Index (DMI). A positive IOD period is characterised by cooler than normal water in the tropical eastern Indian Ocean and warmer than normal water in the tropical western Indian. The BoM has forecasted the development of a weak positive dipole event (Indian Ocean Dipole, or IOD). The outlook for the monsoon suggests surplus rain leading to floods to India, Indonesia, East Asia, parts of Australia, northeast Brazil and (western part) East Africa and following La Nina 2008 pattern as seen below: 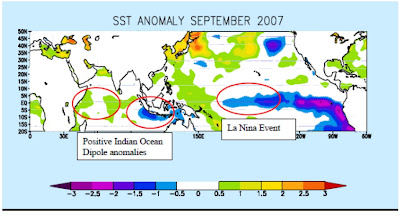 
Abstract The increasing impact of natural disasters over recent decades has been well documented, especially the direct economic losses and losses that were insured. Claims are made by some that climate change has caused more losses, but others assert that increasing exposure due to population and economic growth has been a much more important driver. Ambiguity exists today, as the causal link between climate change and disaster losses has not been addressed in a systematic manner by major scientific assessments. Here I present a review and analysis of recent quantitative studies on past increases in weather disaster losses and the role of anthropogenic climate change. Analyses show that although economic losses from weather related hazards have increased, anthropogenic climate change so far did not have a significant impact on losses from natural disasters. The observed loss increase is caused primarily by increasing exposure and value of capital at risk. This finding is of direct importance for studies on impacts from extreme weather and for disaster policy. Studies that project future losses may give a better indication of the potential impact of climate change on disaster losses and needs for adaptation, than the analysis of historical losses. A pre-publication version of the paper is available here in PDF.