How silly can Greenpeace get? Imagine appealing to Dr. ManMohan Singh to save our Monsoons as if he is Gaia Incarnate!!

The year 2009-10, India suffered its worst drought in almost four decades, with monsoon rains 22% below average. As seen in the the photo, Greenpeace activists hung an 80-foot banner from the Mumbai-Thane Bridge addressed to the Indian prime minister on June 4, 2009. It requested him to save our monsoons given the drought situation. How contradictory this tactic is illustrated by their article 29th June 2009, titled "Its anomaly reigning" posted 29th June 2009 in their website - just a few days after this stunt:

“On assessing the historical data, the Intergovernmental Panel on Climate Change in its fourth Assessment Report suggested, “warming in India is likely to be above the average for South Asia, with an increase in summer precipitation and an increase in the frequency of intense precipitation in some parts.” That the Indian monsoons are going to undergo gross changes as a direct result of climate change – rainfall will increase by ~ 20 per cent overall in the summer monsoon, but the distribution of this increase will not be evenly spread across the country.”

Therefore, the duplicity of Greenpeace stands exposed. On one hand, they take advantage of the drought of 2009-10, by linking this to global warming in their appeal to the PM to save the monsoons and on the other hand, they quote the IPCC report that states India is forecasted to witness increased and more intense rainfall due to global warming! Therefore, irrespective of droughts or floods, their tactics is designed to creating hysteria by linking it to global warming.

This banner stunt however gave a big photo op for Greenpeace and free publicity to their warped understanding of the monsoons.

Ludicrous as it be, did they really believe that Dr. ManMohan Singh or any incumbent Prime Minister of this country could save our monsoon by virtue of office? Of course, they didn’t. This was after all a matter of another Greenpeace tactic viz.  to put pressure on our Prime Minister to sign the climate treaty at Copenhagen in December last year, that would legally oblige India to cut our carbon emissions, decrease energy accessibility to our people, ensuring that more and more fell into the poverty trap and erase India’s global competitiveness by enhanced energy costs. 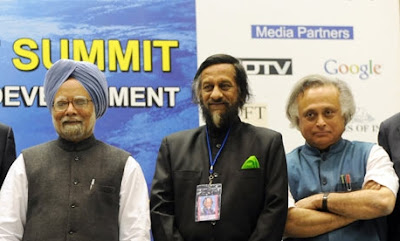 Did Dr. ManMohan Singh fall for such a childish prank? Of course he didn’t. Unlike Greenpeace, he has a quality called intelligence, also aided by the shrewd Jairam Ramesh, India’s Environment Minister and stealth coordination with Dr. RK Pachauri; Chair of the Inter-Governmental Panel on Climate Change (IPCC). The trio performed the Nataraja Dance at Copenhagen last year. (Nataraja or the Lord of Dance is a depiction of the Hindu god Shiva as the cosmic dancer who performs his divine dance to destroy the universe.) The result was all hopes for a climate treaty ended up dashed.

The June-September monsoon rains, which deliver 75 percent to 90 percent of India's rainfall, is vital for its farm output and economic growth, as only 40 percent of the country's farms are irrigated. So it is significant that despite Dr. ManMohan Singh’s "total inaction", this year the monsoons bounced back, almost with a vengeance.

As could be observed from the graph above, usually IMD forecasts tend to be conservative and the actual are usually better their forecasts. This maybe more true this year. Last week alone recorded 25% rainfall above normal. Further, many climatic institutions including the IMD have confirmed high possibility for a late monsoon withdrawal phenomenon. Usually the SW Monsoon starts withdrawing by late August and terminates by mid-September.  This year its withdrawal is only expected to start by end of September and terminate only earliest by second week October due to the La Nina effect. Last year too the SW Monsoon demonstrated the same pattern. By now, there is unanimity too that the La Nina will be a strong one. The only speculation is how strong? Is it strong enough to be a super-La Nina? Accordingly, there is an increased likelihood of actual rainfall for the entire season finally hovers around 105-106%, if not more, of its LPA.

[Late monsoon withdrawal and delayed start of NE Monsoon could be best news for the Delhi Commonwealth Games after a string of all kinds of bad news. This does not mean there would be no rains. It only means that it would likely to be of the low intensity kind. ]

Atmospheric scientists usually define a normal monsoon as one where the nationwide rainfall from June to September is within 10 per cent of the long period average for the season; a rainfall deficit of more than 10 per cent is taken as a drought. By that definition, the south-west monsoon has been normal 70 per cent of the time over the last 130-odd years. There has been a drought in only about 16 per cent of the years. There have been droughts in two successive years on just three occasions. Moreover, thus far whenever a drought involved a rainfall deficit of 20 per cent or more, as happened last year, the subsequent monsoon has invariably been normal. We experience excess rainfalls roughly less than 14% of all years.

Droughts and excess rainfall are accordingly part of the monsoons normal variability. More over there is almost one-one correlation between droughts and El Nino on one hand and excessive rains with La Nina on the other hand. The intensity of deficient or excessive rains will however depend on the respective strength of the ENSO phenomena (El Nina or La Nina). By tracking the strength of ENSO we accordingly able to forecast how good or bad the monsoon rainfall could be.

The dangers of overlooking El Nino-Southern Oscillation (ENSO) in monsoon prediction could be illustrated in the contrasting performance of the IMD’s monsoon forecast for 2009-10 and 2010-11 respectively. Last year, the IMD has been predicting a normal monsoon during the June-September season since early March. The IMD took a cautious stand over the World Meteorological Organisation’s (WMO) projection of a ‘poor monsoon’ due to a probable ‘El Nino’ impact. The IMD did not agree with WMO’s projections, saying, “El Nino and the progress of monsoon are not mutually exclusive events”, and remained non-committal over its earlier projection of a “normal monsoon” for the June-September 2009 season. The result was they ended with mud on their faces when the rainfall recorded a - 22% departure from LTA. This year they factored the La Nina to predict normal rainfall, and came out winners, despite their conservative projections of a normal rainfall instead of an above average one.

Avoid the lies of Greenpeace, WWF and climate staff of the likes of Christian Aid, Oxfam, Action Aid, CARE etc. They are trained to use communication techniques of Joseph Goebbels designed to keep you in perpetual ignorance of weather and climate issues.  You need not be a climatologist to predict drought in an El Nino year or above average rainfall during La Nina year. Both the phenomena is entirely natural and nothing to do with carbon emissions.

If you have any doubt, take courage from this blog administered by non-climatologists. As back as April 15th this year, we warned in our posting Heat Wave as Evidence of Climate Change? When Will NGOs Stop Telling Half Lies? This was written as a reaction to a statement released by the Centre for Science & Environment (CSE) in April this year linking global warming to the El Nino induced heatwave in India. We stuck our necks out to predict the following:

"But the good news for Indians that at last we have the El Niño off our backs....We are probably due to early monsoons (its usual arrival time is first week of June); above average rains (which means floods and cyclones in many areas) that should catapult our agricultural growth between 3-4%, translating in an overall growth, in and around double digits with food commodity inflation poised to plunge significantly....

Assuming the global markets remain stable, the Mumbai Sensex and the Nifty this Diwali will see a new high that in turn will see the urban middle class who dabble with equity having more money in their hands. Those NGOs involved in sustainable agriculture should be preparing to take advantage of such a prospect. Those NGOs involved with humanitarian work can use the next one month as lead time to undertake flood and cyclone relief activities."

How accurate had been these predictions? Well the monsoon onset was almost one week early,  as on date, the monsoons are above average,  huge swathes of India has been inundated by floods,  though it is still early days for cyclone as the period just kicked off. We are expecting an all time record crop, with agriculture poised to mostly clock a 5-6% growth  rate, because of a strong La Nina. Stock markets are buoyant and inching towards the previous all time high, and if there is no bad news globally, the Mumbai Sensex will scale a new high next month by Diwali. Food inflation has already dipped and would plunge rapidly in the months ahead as agriculture only needs to grow at least 4% to keep  inflation at check, and this year's growth rate is likely to be well above this.

Sadly, most NGOs obsessed with delivering apocalyptic messages did not take advantage of increased precipitation over country to boost agricultural production of small and marginal farmers. With good rains, fresh water comes up and saline water goes down. So Rabi (winter-sown) crops can be expected to achieve an all time bumper production as well.  States in Eastern India like West Bengal, Orissa, Jharkhand etc who till now received deficient rainfall, can be expected to narrow this deficit and their Kharif (summer) crop deficit can be attempted to be made up.  So NGOs involved with agriculture development can still have an opportunity to play a meaningful role, if they have missed the opportunity during the Kharif season.

We see no danger yet of any evidence of the scenario painted by the IPCC report and quoted by Greenpeace and other NGOs repeatedly:

That the Indian monsoons are going to undergo gross changes as a direct result of climate change – rainfall will increase by ~ 20 per cent overall in the summer monsoon, but the distribution of this increase will not be evenly spread across the country.

However, if the IPCC painted scenario had only been true, an increase by 20% in rainfall could have given India a double digit growth rate for agriculture and at least double of that in terms of GDP. Such stupendous growth could have wiped out the face of poverty within 5-10 years in our country. If this is “climate change”, Indians should be welcoming it with open arms. But alas, more than a decade has passed after the IPCC had predicted such a scenario but we find practically no such change in our rainfall long period average (LPA). The LPA, even factoring the current “exceptional” summer rainfall, remains still a tad below 100%.

If Greenpeace or any NGO like Christian Aid, Oxfam, CARE or Action Aid tells you that 10-15% of the country, still do not conform to the overall rainfall distribution pattern in an attempt to raise apocalyptic scares; ask them to provide the graph of any year in recorded history when this did  so all over the country uniformly. The even distribution of monsoon rainfall is a myth deliberately conjured by NGOs to suit their apocalyptic messages. That should shut them up! Enough is enough, we need stop being victims of their propaganda campaign.

Posted by Rajan Alexander at 8:34 PM