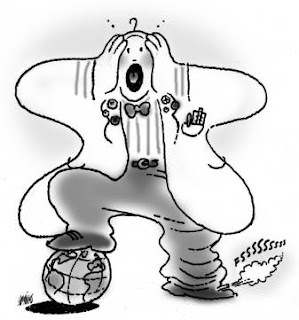 “The global warming movement as we have known it is dead. It was done in by a combination of bad science and bad politics”

This was Walter Russell Mead in his blog on The American Interest.  Two weeks ago, the foundation graph of IPCC's theory to Global Warming was proved a fraud by a new peer review study. Now an external inquiry constituted jointly by the UN and IPCC to look into the working of the IPCC concluded that the IPCC made claims with high confidence levels when in reality they had little or no evidence for it. So what happens to the core faithful of the movement? They apparently are still to come to terms to the death of their movement.  Rudderless, this small rag tag army is increasingly taking to violence and fascist ideology.

"The politicians have failed. Now it is up to us. We must break the law to make the laws we need: laws that are supposed to protect society, and protect our future. Until our laws do that, screw being climate lobbyists. Screw being climate activists. It's not working. We need an army of climate outlaws.

The proper channels have failed. It’s time for mass civil disobedience to cut off the financial oxygen from denial and scepticism. If you’re one of those who have spent their lives undermining progressive climate legislation, bankrolling junk science, fuelling spurious debates around false solutions, and cattle-prodding democratically elected governments into submission, then hear this:
We know who you are. We know where you live. We know where you work. And we be many, but you be few.”

This was Gene Hashmi, Greenpeace India’s Communications Director. See our archive posting here.  His outburst showed that as early as April this year, these astro-turf “Greens” knew that they were losing the battle. Hashmi’s battle cry was a forewarning what a defeated and humiliated army would degenerate to - violence, terror etc.

“We must break the law to make the laws we need”.

We can ask, what kind of law can we expect from the modern day Hitler Youth movement who subscribe to the law of the jungle and readily take law into their hands? James Lovelock, one of the ideologues of the movement confirms the fascist underlining of the movement:

“It may be necessary to put democracy on hold for a while, in order to save humanity.” 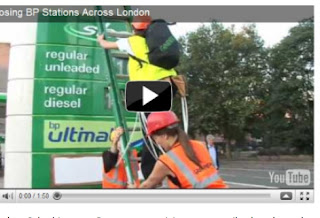 In late July this year, Greenpeace activists temporarily shut down dozens of BP gas stations across London to protest the company's handling of the Gulf of Mexico oil spill and to draw attention to environmental problems stemming from the world's reliance on petroleum. A month later, they broke into the safety zone surrounding Cairn Energy’s drilling rig Stena Don in Greenland by forcing their entry. The Government of Greenland reacted strongly:

“This constitutes an obvious illegal act that disregards the democratic rules. It furthermore constitutes a severe violation of the safety regulations put in place to protect human lives and the environment.  The drilling in progress has therefore been stopped and Greenpeace has once again succeeded in impeding Greenland’s opportunities to secure the economic foundation for its people’s condition of life.

The Greenland Government regards the Greenpeace action as being a very grave and illegal attack on Greenland’s constitutional rights. It is highly disturbing that Greenpeace in its chase on media attention with all measures breaks the safety regulations put in place to protect people and the environment.

The Greenland Government condemns the illegal action, but remains however confident that the police and the executive authorities will continue to ensure that the legal business activities can continue undisturbed. Through a comprehensive inspection program, it has been demonstrated that Cairn’s drilling programme in Greenland has been executed according to very high safety standards. All government requirements have been met conscientiously and the Greenland Government therefore remains fully confident about Cairn’s activities in Greenland.” 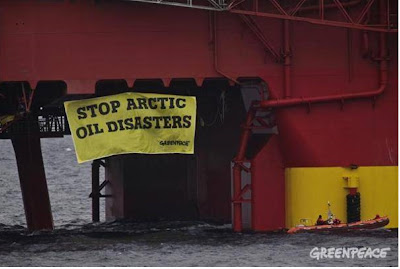 Greenpeace however was unrepentant. In their blog their proudly stated that their act of vandalism:

The four Greenpeace activists had been arrested and we can expect them to get exemplary punishment - all for “the cause” which Greenpeace gloats about! 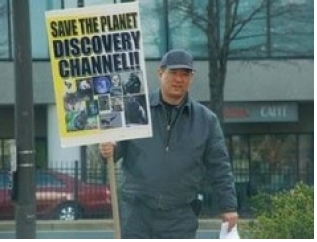 How dangerous the Greenpeace model of protest on the rank and file of the environment movement is illustrated by the hostage crisis in Discovery Channel in the US a few days ago. James Lee, an Asian American, entered the lobby of the sprawling building waving a handgun with a package and metallic canisters strapped to his body and took hostages. He is reported to have yelled "Saving the Planet means saving what's left of the non-human wildlife by decreasing the Human population. That means stopping the human race from breeding any more disgusting human babies!" He was shot dead by the police with the hostages unharmed!

Earlier this year, a Brazilian couple shot dead their two children before shooting themselves. The reason: they feared global warming consequences!  Like Lee, they were incited to violence after watching Al Gore's Inconvenient Truth!.

Before trying the ‘save the world’, we should be actually trying to save the environment movement from astro-turf “Greens’ who focus on imaginary than real problems and subscribe to ends justify means philosophy that are being seized by anti-green forces to paint the whole environment movement as total nut cases. Any democratic movement should uphold the rule of law but not glorify instances of breaking it as Greenpeace does. The human rights movement does itself a gross disservice by keeping silent on blatant violation of the rule of law by the likes of Greenpeace. This includes the production of apocalyptic communications that leads to trigger acts of terror such as we faced in Discovery Channel.

The popular climate skeptic blog, WUWT has  just broke the news that the wing of US Homeland Security, START Terrorism Center - University of Maryland, in a new report concludes that the deadly hostage-taking incident at the Discovery Communications headquarters in suburban Washington, D.C. meets the criteria of a terrorist act! START maintains a Global Terrorism Database (GTD). Who knows? A membership with Greenpeace would put you in this list! Read more at WUWT.