Two Graphs: One puts a smile on Global Warmists, the other sheer horror 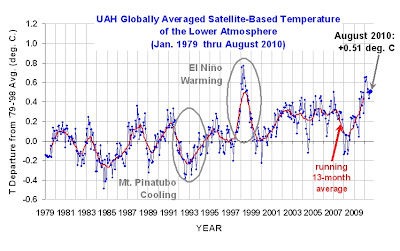 2010 is giving a tough fight to 1998 to be the warmest year in recorded history. As of 31st August, it’s a neck-to-neck contest at this stage! Average global temperature anomaly stood a strong +0.51 deg. C, liberally helped by record heatwave conditions in many parts of the Northern Hemisphere including Russia, Eastern Europe, Japan etc.

This despite the Southern Hemisphere being extremely cool including India where average temperatures are running 2-3 deg. C below normal.  It has to be noted that most of the landmasses are located in the Northern Hemisphere and therefore command a greater weightage in the computation of average global temperature departures. Nevertheless, these heatwave conditions have abated by third week of August and since then the average global temperature departures plunged significantly which would start reflecting themselves in next month’s readings. 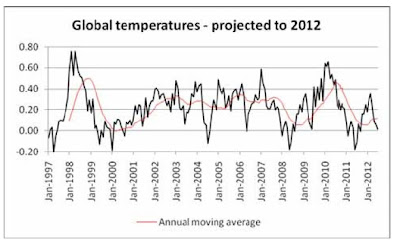 However, just look at the second graph prepared by the University of Alabama in Huntsville, a crude projection of global temperatures of the lower troposphere until mid-2012. Accordingly 2011 could well be in contention to be one of the coldest years in recorded history.  The entire century’s warming are projected to be wiped out by December this year or January next year.

The basis of the graph is the assumption the current La Niña would mimic the strength of the 2007-2008 La Niña. How appropriate is such an assumption? Bob Tisdale who administers an excellent blog that tracks the current La Nina provides a graph that provides us an insight: 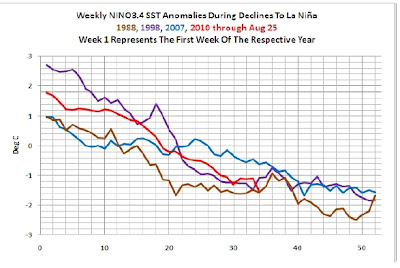 The current La Niña, though still developing, has surpassed in strength of the 2007-08 one and now competes with those of a much stronger La Nina as experienced during 1988 where sea surface temperatures anomaly (SSTA) in the NINO 3.4 plunged to -2.23 deg. C. Could it turnout to be a monster La Niña that plunges sea surface temperatures even further than this mark?

Joe Bastardi of Accuweather thinks there is a possibility it may do so. We need to wait and watch though one thing is sure, after the rains and cyclones comes the Big Chill!

So in Cancun later this year when you see climate activists marching, shouting "Time is running out", you should know better that time is actually running out for them.

Support Pachauri to stay as the Chair of the IPCC while demanding the IPCC to be disbanded. This is the only honourable exit for Pachauri while getting rid of a thorn in the flesh (IPCC) out of our way!