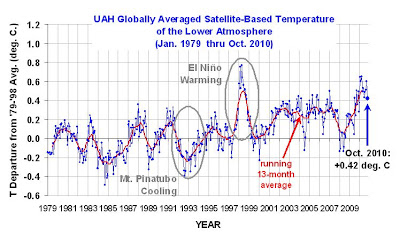 Until September, 2010 was giving 1998 a neck-to-neck fight for the distinction of the warmest year in recorded history. The contest has now ended. 2010 flattered to deceive as it ended up exhausted in the last leg, and for all practical purpose, given up the race. As seen from the graph, provisional UAH (satellite) data for October indicate that global temperature anomaly dramatically plunged by 0.2 deg C during last month. 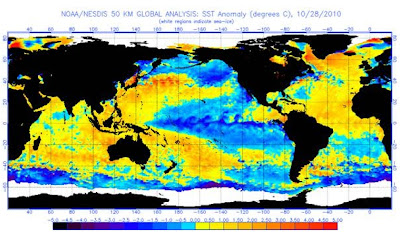 If global warmists think that we climate sceptics are their worst enemies, then they should think again. With a stronger than expected La Nina still developing, the cooling trend can only be further expected to accelerate in the coming weeks and months. Just look at the riot of blue (cooling) of the oceans due to the majesty of the developing La Nina. The small pinches of purple (severe cooling) can be expected to expand in area in the coming months.

As the oceans cool, the troposphere cools which in turn cools the landmasses. And as winter approaches, the cooling can be expected to accelerate further, prompting climatologists and climate research institutions to predict the coming winter as one of the harshest in recent times.

And the more inconvenient truth is that the temperature plunge is on going, meaning the temperature anomaly can possibly go negative in the coming weeks and months. This would make the Climate meet at Cancun later this month a laughing stock discussing global warming when global cooling is on way! The La Nina effect is further expected to last through early months of 2012 with 2011 competing to be one of the coldest in recorded history. The omens are obvious. We are entering the decisive endgame of the climate change debate. Pachauri, IPCC and sceptics all become all irrelevant. The climate debate would be ended not by either by any “weighty” scientific data or international treaty, but ironically by the “climate” itself. From now on, NGOs and global warming activists would be squirming as the “climate” turns more and more against them. By end of April next year, they will stand totally discredited with their reputations in tatters as observed data will largely be seen as widely divergent from the hysteria they whipped up. 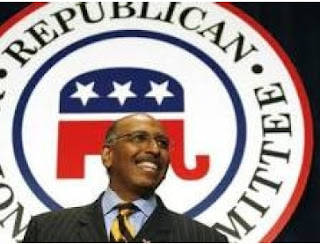 However, trouble for global warmists doesn't seem to end here. The political winds do not bode well for renewable energy and climate change policy. In the next 24 hours, the results of the US mid-term elections will start trickling in. Opinion polls show a huge anti-incumbency wave against the Democrats that would give the Republicans the chance to storm back with a big majority in the Congress and perhaps to sneak through with a slender one in the Senate.

Republicans are making a comeback with a larger leading margin than any of the parties have held since the 1970's. According to a Gallup Poll, Republicans are taking the lead by an impressive 55 percent, while the Democrats lag with a 40 percent, The Democrats and climate activists have to settle for the consolation prize, by succeeding in thwarting off challenges to repeal California's landmark climate-change law through ballot initiative called Proposition 23. 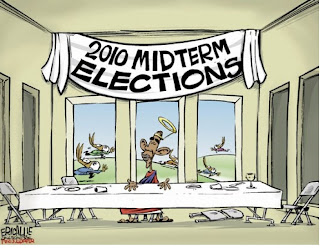 Even if the Republicans end up with control of only one of the houses, sceptics will score a big victory. This is sufficed to create a constitutional gridlock. It will be difficult for Democrats to pass their most controversial bills since the coveted super majority (having 60 or more senators in favor) is now gone and having a simple majority in the Chamber is not enough, especially when Republicans have vowed to filibuster. This means any issue split down the middle of public opinion, is likely to not see the light day in terms of legislation. Climate change is one of these issues. Hopes of the US ratifying any new climate treaty is now practically non-existent. And if the US is unlikely to ratify any climate treaty, the prospect of any new international climat6e treaty will be extremely dim as no country will be willing to sign up a treaty, which the US won't. Cancun will end up as only a talking shop. But much worse for climate activism is that with majority leadership of one or both legislative houses wrapped up, the Republicans are now in the position to subpoena witness and pursue house investigations. Until now, the Obama Administration had white washed all enquiries related to Climategate. Now Republicans, largely climate sceptics can be expected to re-institute these enquiries and take the prosecution to its logical end. These enquiries will extend to also ascertain whether US climate agencies like NASA and NOAA had been manipulating the country's and global temperature data. Sceptics have shown all over the world that raw temperature data do not show any significant global warming trends. It does so only when a "fudge factor" is applied. Not only now will manipulation of temperature data probably stopped, but also these enquiries can lead some of these tainted scientists to go to jail. One such marked scientist is Dr. Michael Mann .  Mann conjured the hockey stick graph, which the IPCC touted as its foundation graph proving the global warming theory. The graph had been proved a fraud and the Pennsylvania University who Mann works for, until now showed a reluctance to bring Mann to book. Now, Republicans  who are in a position to control budgets, these attitudes and resistance of Penn University should change. Global warmists had also  ensured that research grants were conferred to institutions that were sympathetic to their cause and denied to those who opposed it. With Republicans controlling budgets, this  could ensure such bias funding is set right. The Republicans in all probability would leave NGOs and environmental organizations alone. All except for World Wildlife Fund (WWF), who stood out at carbon profiteers? WWF can be expected to be investigated and receive reduced share of US government funds.

Posted by Rajan Alexander at 2:30 AM