COP 16 Cancun Climate Meet: What a difference a year can make! 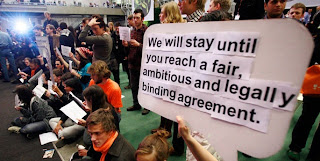 Last year at COP 15, UNFCCC meet in Copenhagen, the mood of climate activists at were not only upbeat but belligerent. The campaign for a successor treaty to the Kyoto protocol began as much as six months in advance.

Spurred on with funds and encouragement from sponsors, climate activists in thousands booked all jumbo jets and hotels to attend the event so much so that air-fares sky-rocketed and hotels booked to their brim. The world media joined the chorus and delivered a massive coverage.

Though Al Gore, the high priest of global warming by then lost much of his following, Rajendra Pachauri filled this vacuum by becoming the visible face of the movement. The pressure forced a record number of world leaders to descend on Copenhagen, even our Indian Prime Minister, Dr. ManMohan Singh who was reluctant to attend was eventually  pressurized to do so. And so did Obama the popular new U.S. President waded in to put his reputation on the line.

Copenhagen however proved the last hurray of the global warmists. Their moment actually passed after Climategate - leaked e-mails from UK's Climate centre a month to the run-up of Copenhagen meet while the latter itself ended without serious progress on a successor treaty to the Kyoto protocol. Then came the fast and well coordinated skeptical attack of the IPCC's AR 4 report, punching holes, and leaving the credibility of the institution of IPCC and its Chair, Rajendra Pachauri in tatters. Pachauri soon went out of sight from public eye.

The political landscape and public opinion around the globe began to turn dramatically skeptical of apocalyptic claims of climate alarmists. With the spectre of a Republican win of the Congress, the Cap &Trade Bill becoming toast, the Chicago Carbon Exchange collapsed with a ton of carbon finding its true value - zero. Without US ratification of any successor treaty to Kyoto, any global treaty on emission cuts is rendered impossible, leaving aside a last minute miracle. Al Gore's seminars found no takers and a week ago he admitted that his support for bio-fuels was a big mistake. The European Union’s touted reduction in carbon emissions has been exposed as a giant fraud. The EU is actually responsible for 40 per cent more CO2 today than it was in 1990!

A series of meetings in Germany, Korea and China to the run-up of Cancun proved inconclusive. The UNFCCC is under severe pressure to jump start the treaty process in Mexico, however, public doubts about climate science and policy coupled with an inability of developed and developing nations to find common ground leave the UNFCCC with a daunting task ahead. Accordingly, the mood of climate alarmists going into Cancun is visibly downbeat. The world suffers from apocalyptic fatigue and scepticism so much even they know too well their usual doomsday soothsaying are now met with derisive laughter. With public support cultivated over the last decade or so has largely evaporated, the lack of confidence reflects itself in the run-up to Cancun. So unlike Copenhagen, this time it had been a rather quiet and more sombre affair.

Even the media coverage this year had been sparse, at best lukewarm. This is in contrast to the run-up to Copenhagen where important newspapers printed urgent front-page calls for action and TV News channel carried daily debates and documentaries to spur the public to demand action from their governments.

Again unlike Copenhagen where President Obama, Secretary Clinton, and Speaker Pelosi all attended, this year, they all apparently will be absent. The U.S. delegation will be led by a state department official named Todd Stern. So would be the number of head of states attending the meeting - reduced to a handful. So will  be the number of climate activists - who will make a token presence at Cancun. Unlike 24x7 news coverage of Copenhagen, hardly any one will pay attention to the climate conference at Cancun next week, where a much-reduced group of delegates will go through the motions.

But make no two bones about it. With trillions at stake it is highly  unlikely those carbon traders (whose markets expire with the Kyoto protocol), 'green' energy manufacturers, warmist scientists, environmental organizations, NGOs are not going down without a fight and they can be expected to the push for a new treaty with renewed ferocity:

"Cancun is a make or break opportunity to save the lives of millions of children whose lives will be made even worse because of climate change" said Lydia Baker, Save the Children's humanitarian policy adviser.

These are cries of terminally ill patients hoping for a  last minute miraculous recovery. The fact is that concerns about energy security and the parlous state of most western economies, besides the developed and non-developed countries divide, rules out any comprehensive global agreement on any emission cuts. As per the Copenhagen Accord, the developed countries have promised USD 100 billion a year of climate financing. Building on that promise is the report by the UN High-Level Advisory Group on Climate Change Financing, released earlier this month, which detailed how the rich can make good on their financial pledges to help poor countries reduce their emissions and adapt to climate change. They found that a carbon price of USD 20-25 for each tonne of CO2 emitted is required to raise funding in the amounts required, which would include a tax on aviation and shipping.

But the reality is that with collapse of the Chicago Carbon Exchange in the US, with Australia and Canada highly unlikely to pass a legislation permitting carbon trading, with the Eurozone economies struggling to stay afloat; the Copenhagen financing agreement is most  likely be put into the deep freezer. This leaves free transfer of "renewable energy" technologies as the only area with any chance of agreement. But unwillingness of Western government to do away with patent laws may also throw a spanner into the wheel even here.

Such is the mood of gloom, Cancun scientists say that mass suicides are the only option left! It is now so severe that only by exterminating ourselves like the vile parasite we are can we hope to leave a planet fit for habitation by generations as yet unborn, ’scientists’ say. Read more James Delingpole's post in the Telegraph. 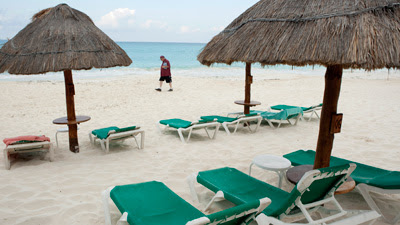 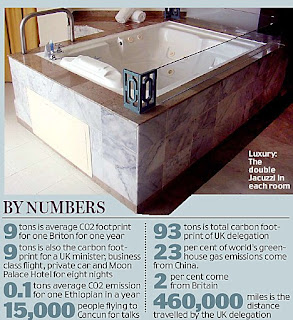 But some things remain the same even when everything else changes. This is hypocrisy. Government delegates will live in style in resorts with personal Jacuzzi in each £240-a-night suit. They have a choice of 14 buffet and a la carte restaurants and 12 bars, and can even strengthen the Coalition over a round of golf on a course designed by Jack Nicklaus. Read more here.

What would be different from Copenhagen is the world media would be spared the spectacle of warmists shivering of a bitter northern winter of unseasonal snow and blizzards, or heads of states, including Obama scampering to catch their planes before a blizzard dumped a foot of snow into the city. Cancun's tropical climate ensures there is no such embarrassment for warmists. But this does not take away the fact that almost the entire North Hemisphere is experiencing early and record cold. Here’s an overview:


Snow was spreading across Europe Friday as a prolonged blast of wintry weather tightened its grip, causing travel headaches and havoc on the highway. It is the earliest November snowfall in 17 years. Read More

Winter Dec to Feb inclusive in Britain and Europe will be exceptionally cold and snowy – like hell frozen over at times - with much of England, Germany, Benelux and N France suffering one of the coldest winters for over 100 years. It is expected that two of the three months Dec, Jan & Feb are likely to be in the three coldest for a 100 years (eg using Central England Temperatures). Read more

Russia has seen its first snow accumulation of the season. According to Rutgers Global Snow Lab, Russia doesn’t normally receive snow until the second week in September. Read More

You don't have to say any more. The mercury at Llysdinam near Llandrindod Wells plunged to minus 17.3C – the principality’s lowest ever temperature for November and the UK's chilliest for the month since 1985. That temperature, incidentally, is just a fraction above the optimum for a domestic freezer. Read More 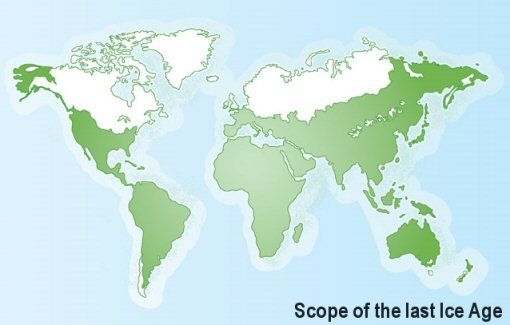 Snow covered roads from heavy winds in north China's Inner Mongolia Autonomous Region hindered efforts to reach 1,000 herdsmen, who have been cut off since a major blizzard hit the region. The blizzard hit the Hinggan League pasture region, with snow piling up to 30 cm deep in some parts and a meter in other areas. The snow came 40 days earlier than expected and was said to be the heaviest storm in 30 years, killing at least 700 livestock. Read More

Heavy snow was falling on Mount Hermon and on the higher areas in the Upper Galilee and Golan Heights on Thursday, while rain, hailstorms and strong winds were felt from Israel's North to the Negev. Minor snowfall was reported in Jerusalem. Read More

Snow and ice build-up cause Canada Line failure. Canada Line officials say they will run de-icing trains around the clock during future snowstorms after a section of the $2-billion rapid transit line was temporarily crippled by the weather Thursday morning. Two trains full of passengers were stalled on separate parts of the Canada Line track during rush hour because of snow and ice build-up on the power rail -- a third tracks that supplies power to the trains. Read More

Heavy snow moves across the United States. The central Rockies braced for a second round of heavy snow Tuesday as a powerful storm system moved across the western United States, forecasters said. A foot of snow with locally higher amounts was forecast for the mountains of northern California while more rain was expected in San Francisco and Los Angeles, Accuweather.com reported. Read More

The central Rockies braced for a second round of heavy snow Tuesday as a powerful storm system moved across the western United States, forecasters said. A foot of snow with locally higher amounts was forecast for the mountains of northern California while more rain was expected in San Francisco and Los Angeles, Accuweather.com reported. Overall, AccuWeather.com Chief Long-Range Meteorologist Joe Bastardi is predicting that the worst of winter's cold and snow will be from the Pacific Northwest into the northern Plains and western Great Lakes. Read More

According to local media reports, lakes in the upper altitudes of the region have iced over. The severe cold wave was caused by a snowfall on October 22. The arterial roads leading to Kullu remained cut off for a few days due to which the normal life got disturbed. Read More