One Year after Copenhagen Quick Survey: Do NGOs still believe Time is Running Out??

Time is running out (for a climate treaty that could save the world from complete disaster) was the clever catchphrase of NGOs during United Nations Climate Conference at Copenhagen last year. With the same Conference again due to kick off at the end of this month at Cancun, we did a quick survey to check the impact on their campaigns, after a year’s delay of inking this Climate Treaty.

We assumed, given the kind of passion and drama that they displayed in Copenhagen, their campaign should now display an air of even more desperation and shrillness. Today, we visited the lead page of the websites of the World Wildlife Fund (WWF), Greenpeace, Christian Aid and Oxfam, all leading members of the Climate Justice Network just to get a feel where their campaign was going. This is what we found: 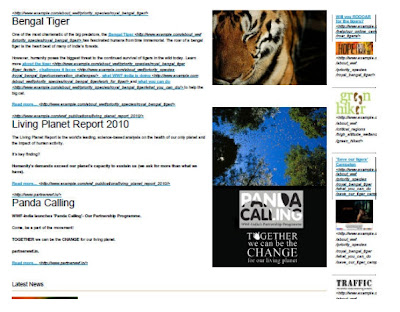 Unlike other NGOs and environmental groups, WWF can be singled out among the few that actually directly profited from the global warming in a big way. So theirs was the first website we visited and what did we find? Not a mention of any climate issues by the lead page of their website. Time was now running out for saving tigers and pandas. This was apparently their need of the hour!

Apparently, they have moved on. They have gone back to the core issue which is their raison d'etre.

After Copenhagen, they were the ones who threatened we climate sceptics telling us "We know where you are". They also promised to take their struggle to the grassroots, to breaking laws. So we were extremely curious to know their preparations for Cancun. And no surprise here as even the Greenpeace lead page showed that climate change was apparently an all forgotten issue.

Instead, Greenpeace were found directing all their ire at the Ministry of Environment & Forests (MoEF) for their double speak on violation of the Forest Conservation Act in Orissa. Like WWF, Greenpeace also apparently have gotten over their climate obsession and moved on. Like WWF, they apparently returned to core environmental issues which are a welcome change.

Christian Aid was a key member of Countdown to Copenhagen, a global campaign of church based development and humanitarian agencies across Europe and the world, ostensibly campaigning for social justice on climate change. So seriously global warming was taken by this lot that they even revised Christian theology to align with the teaching of Al Gore's religion of doom.
Yet one year later, we found no mention of climate issue in their lead page. Instead, we find more mundane stuff such as the former UK Prime Minister Gordon Brown praising their trace the tax campaign; their Christmas fundraising, details of their sanitation programme etc. Evidence of Christian Aid retreating back to their roots. Hallelujah! This makes 3 out of 3 who put climate change in their backburner. 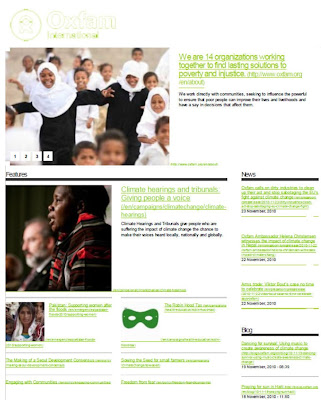 Oxfam is generally considered a market leader of the sector and who set the development trends. Instead of differentiating from the likes of Greenpeace and WWF, on the climate issue, they became a copy cat while it is open to question whether even environmentalism and science are the core strengths of the organization. We would have expected as leaders, once realizing they are on the wrong path they would quickly retracted their steps. But no. Oxfam was the only among the four biggies we found whose main feature of their website was still on climate. Their Indian blog pointed that the Oxfam campaign on climate was still very alive and kicking:

“In 2009 Oxfam India worked with partners to hold more than 6 hearings across the country involving people from affected communities, climate experts and local and national decision makers.

In 2010, on 16th November, Oxfam India and partners are going one-step further – they are bringing together people from communities across 10 different Indian states, along with  climate and legal experts, to explore what the possibilities are for litigation both at national and international level on the impacts of climate change...

While we all recognise the central importance of a fair ambitious and binding deal that involves all countries, this is not the only course of action. And we cannot sit back and wait for politicians to act in the interests of people right across the world while those very people continue to suffer. Climate litigation provides a real possibility in terms of bringing those responsible to account – and Oxfam India and their partners are helping to lead the way for India and the world.”

Climate litigation maybe look catchy advocacy but it can also open a can of worms as it is not only NGOs and environment organizations suing everyone else. It is also possible that it can be the other way round - anyone can sue NGOs and environmental organizations. Suing Oxfam for example for distributing tens of thousands of fuel guzzling SUVs over decades to their staff and partner organizations or for transporting “climate activists” to Copenhagen or climate tribunals and thereby unnecessarily increasing  their “carbon footprints”. And these are only of starters. So will this advocacy have a future? Most probably not. Before the next financial year, climate sfaff of Oxfam can expect the pink slips.

Climate Change as an Issue is Terminally ill, It may survive Cancun but not this Winter 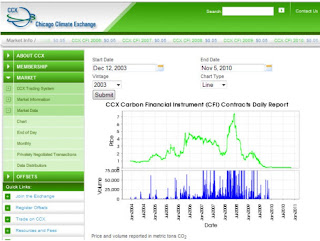 Gore and Pachauri advised the Chicago Carbon Exchange (CCX) to be closed. The closing price a mere $0.05 per ton of CO2, and yet no buyers. Here’s the final day closing page for posterity - the confirmation from CCX’s ECG chart. CCX was closed two months.

The carbon market,  an important fulcrum of the climate scam, is dead and this signals a quick end is in sight for the issue of Climate Change. While the issue may survive the expected failure of Cancun, it may not survive this coming La Nina winter, which experts has forecasted as one of the harshest in recent times. There might not be a formal acknowledgment that the issue was a false alarm. But for all practical reasons, the main actors in the Climate Justice Movement will allow it to quietly fade away.
With our objectives attained, accordingly, we will be continuing this blog until December. After that the blog will transform itself to addressing issues and challenges of coping with global cooling!

Posted by Rajan Alexander at 11:08 PM