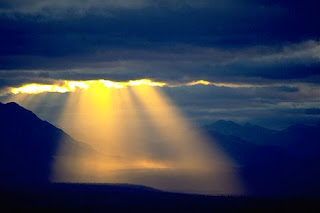 Take any religion, you will invariably find God being equated to Light. The sun, as the great source of light and heat, was worshiped in the earliest ages of the world. Sun-worship was the dominant religion in all ancient civilizations, spreading from Babylon to India, China, Africa, Greece, Rome, Mexico, South America, Egypt and Europe.

In India, the climax of Hindu puja (worship) is the lighting of the Arti lamp. The lamp is circled three times in front of the image in a clockwise direction. The blessings of the Arti lamp are shared by the congregation. They make an offering on the tray. They pass their hands over the light, then over their eyes and hands, symbolically receiving the blessings of God. Most people involved in Yoga also know about Agni, the digestive fire of Lord Agni, a major Deva (Shining One) that the ancient wise ones of the Himalayas recognized.
In Christianity, it is very similar too. God always revealed Himself as a God of glory, light, and splendor. Light is of the very essence of God's nature. The very first thing that God called “Good” was light. (Gen. 1:4) Light is the most spiritual of all the things we know in the realm of the physical. The more we know about light and its blessings, the more we will understand the glory and splendour of God, who is light, and the source of all lights. Only one part of light is physical. We see only the six colours of the rainbow which is white light divided up into its six different wave lengths. But this is a mere fraction of light. There are cosmic rays, gamma rays, x-rays, ultraviolet rays, infrared rays, television, radar, short wave, standard and long radio waves, and long electric waves. These and many more are different categories of light we cannot see. But man is only beginning to use these invisible sources of light to do wonders in life. So the challenge of spirituality is to recognize there is great power available in the realm of the invisible. The power of life is in light, and without light life cannot continue. We could get into biology here, but man's new discovery of the power of light is more fascinating. Albert Einstein back in 1905 wrote a paper on light that won him the Nobel Prize. In it he proved that light is both a wave and a particle, and so light is a paradox, and has the freedom to be different things in different experiments. In 1960 Dr. Theodore Maiman made and used the first laser, and since this, many new lasers have been developed for doing what man could never do before. Now, by the power of light, the life of man is being radically changed. In our life-time light has changed almost every facet of our lives. Electricity is one invention that completely revolutionized the world. But a whole new ideology has developed by Climate Change Activists that completely demonizes electricity. Their rituals like Earth Hour, celebrated last week, is a euphemism for the celebration of darkness, a disguised worship of Ravan, Satan, Lucifer or whatever the Prince of Darkness is called. In India we celebrate Earth Day two to three times a day, 365 days, due to compulsory load shedding. In summer, a one hour power cut can extend to as much as 6-12 hours, depending upon which state we reside. It is in this scenario, climate activist celebrate their "Earth Day" with much fanfare.

Professor Ross McKitrick, one of two scientists that exposed the Hockeystick Global Warming Graph as a fraud had this to say in WUWT on the contribution of electricity:

Giving women the freedom to work outside the home depended on the availability of electrical appliances that free up time from domestic chores. Getting children out of menial labour and into schools depended on the same thing, as well as the ability to provide safe indoor lighting for reading. Development and provision of modern health care without electricity is absolutely impossible. The expansion of our food supply, and the promotion of hygiene and nutrition, depended on being able to irrigate fields, cook and refrigerate foods, and have a steady indoor supply of hot water.”

Now in an Earth Day piece, Richard Glover, in the National Times, Australia, says internet will destroy the planet. As Anthony watts of WUWT commented “Personally, I’ve always thought that the key to an advanced and open society was freedom of information.”  Do notice that the author reserves his choicest invectives for climate skeptic bloggers. Why? We are winning by miles and  humiliating the paid communication staff of climate activist organizations in impact. So we reproduced the article to be enjoyed with the exhilaration of India’s emphatic Cricket World  Cup win:

Why the internet will destroy the planet
Courtesy: National Times, Australia 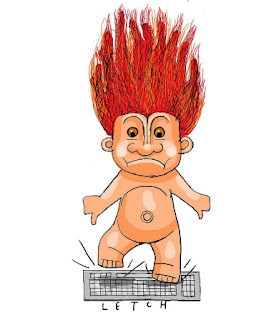 Idiots used to be corralled in places called pubs, in which they could bore each other with their crazy opinions while drinking themselves into alcoholic dementia but now — suddenly — they are everywhere. You can read a perfectly decent paper like The Guardian and looming at the bottom of every article is a septic tank teeming with snapping trolls.

The article in question might be anything from a think piece about the universe by Stephen Hawking to a sly piece of wit by David Mitchell, yet the trolls always have the same view: "OMG, this is such crap." That pretty much sums up the view from each witless avatar, whether it be Rastamouse16 or BigBoy8 or CrapForBrains22.

Twitter has always felt like a bad dinner party — one in which everyone is talking and no one is listening. All the same, YouTube may be worse. Consider the hissing sack of snakes that has attached itself to Rebecca Black — the 13-year-old American girl who, with the help of her parents, has recorded a perky video in which she sings about her day-to-day suburban life.

The lyrics, it is true, are hardly Dostoevsky but they are no more or less meaningless than any pop song and the melody, damnit, is kind of appealing. A reasonable response could range anywhere from slight annoyance to mild toe-tapping pleasure. Instead, many of the YouTube trolls suggest the girl is such a bad singer she "should commit suicide". No, really.

At last count, the video had been viewed 65 million times on YouTube in the space of a few weeks. More than a million people have logged on in order to record their ''dislike'' of the video. As I write, the comments — mostly negative — are coming in at the rate of 30 every 10 seconds. A sampling from the past 10 seconds: ''Never heard something so STUPIDDDDDDDDDDDDDDDDD.'' ''Hata's lol dhiss suck.'' ''nobody likes you'', ''she sounds like shitt''. And ''die bitch die''. The fact that someone who is unable to spell the word ''shit'' feels entitled to hand out songwriting advice to a fellow citizen may be one of the chief marvels of our age.

It's crowd behaviour of the worst kind; YouTube hands out the pitchforks and off we all go to seize the witch.

The only upside: fame being what it is, this remarkable level of hostility will make Rebecca Black a star.

The planet may not be so lucky. It's increasingly apparent that the internet may bring about the death of human civilisation, beating out previous contenders such as nuclear holocaust and the election of George W. Bush.

Somehow I doubt it. They are so damn confident.

They don't just bury their heads in the sand, they fiercely drive their own heads energetically into the nearest beachfront, their bums defiantly aquiver as they fart their toxic message to the world. How can they be so confident, in the face of so much evidence to the contrary?

It's the internet, of course, and the way it has given climate-change deniers the perfect forum — one in which groups of quite dim people can swap spurious information, reassuring each other there's no evidence on the other side, right up to the point they've derailed all efforts to save the planet. Call it ''mutually reassured destruction''.

In decades past, the climate-change deniers would have swapped theories in the pub or at a barbecue. But at the barbecue there was always one person willing to put a contrary view, to say: ''There's another side.'' And unless the barbecue was particularly nutty, there was no one handing out gestetnered sheets of dodgy science for people to take home.

The net allows the climate-change deniers to bleat about the scientists and whine about a price on carbon without fear of ever hearing a different voice, right up to the point of planetary collapse. To reformulate T.S. Eliot: ''This is the way the world will end — not with a bang but a whinger.'
'
While we await death, at least there's the Rebecca Black video to keep us entertained.

It's attracting more comments by the minute. In the time I've been writing this, the comments have risen from 40 to 60 every 10 seconds. By the time you read this, everyone on the planet will have presumably logged on and told this 13-year-old girl the precise manner in which she should commit suicide. Hurrah for us: it will be the first planet-wide act of bullying since the whole world mocked Kim Jong-il's haircut.

First thing tomorrow the whole internet will collapse, unable to cope with the quantity of bile pumping through the pipes. There will be a final Nigerian email pinging into your mailbox and then silence for ever.

We can but hope.