So what have the Oxfams, ChristianAids, Greenpeaces and Sunita Narains now to say? 30 Years of Warming Erased In 15 Months! 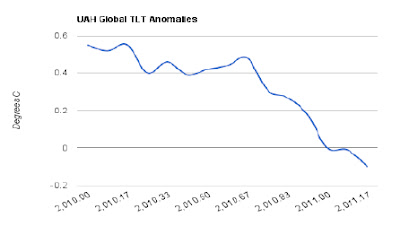 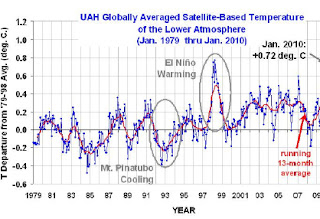 According to the 2007 Fourth Assessment Report by the Intergovernmental Panel on Climate Change (IPCC), global surface temperature increased by 0.74 ± 0.18 °C during the 20th century.

The UAH globally averaged satellite based temperature for March 2011 is out. From a high of +0.72 deg C in January 2010, global temperature anomaly has plunged - 0.1 deg C by March 2011 or a drop of 0.8 deg C within a span of 15 months.  That’s a magnitude nearly equivalent to IPCC’s global warming signal - an extremely sharp precipitous drop.

As seen further, the cooling is global - the Northern Hemisphere, Southern Hemisphere and Tropics temperatures all in the negative territory, with the Tropics demonstrating the largest negative temperature anomaly.  Driven by the La Niña Pacific Ocean cooling event, global average temperatures in March 2011 were the coolest March since 1999, according to Dr. John Christy, professor of atmospheric science and director of the Earth System Science Center at The University of Alabama in Huntsville. It was the fifth coolest March in the tropics, where the average temperature fell 0.35 C (about 0.63 degrees Fahrenheit) below seasonal norms. Three of the five coldest tropical Marches in the 33-year satellite temperature record have happened in the past dozen years: 5th, 2011, -0.35 C: 3rd, 2000, -0.42; and 2nd, 2008, -0.58 C. Last summer, NGOs and environmentalists had a field day creating hysteria around the El Niño induced drought and heatwave conditions within the country. The Centre for Science & Environment (CSE), an organization that positions itself as a knowledge based environment organization, released a press release entitled “Studies say rising mercury levels could be connected to global warming”  had this to say as climate hysteria:

“The summer of 2009 has just begun, and India is already reeling under extreme temperatures as the mercury climbs unprecedented heights....According to Centre for Science and Environment (CSE), there is enough scientific evidence of long-term changes – including temperature increases -- happening not only in India, but across the world, which suggest the influence of climate change.”


The draft of the India Disaster Report of 2011, a NGO publication sounded even more rabidly hysterical:


This blog had challenged both CSE (Read here, April 15, 2010) and the draft India Disasters Report (Read here, June 17, 2010). We provide extracts to our challenge to the latter:

“In fact, the period January to May this year had been the hottest in satellite-temperature recorded history. Unfortunately, it also holds no particular significance per se! You may ask why so. For a research involving the study of climate, you need to put the year 2010 in true perspective - this is the year of the El Niño. The IPCC Chair, Pachauri’s The Energy Research Institute (TERI) singled out the El Nino as the most important phenomenon that affects the climate in South Asia. Even NOAA you referred to you concedes that much of this year’s warming is attributed to the El Niño effect, a natural phenomenon.

The El Niño occurs once every 3-4 years, with one out of their every four occurrences proving exceptionally strong. As the above graph illustrates, the last super El Niño was during the period 1998-99. Every time this happens, average global temperatures tend to spike steeply....

What is more interesting to take note is the post-El Niño global temperature behaviour that is usually conditioned by a reverse phenomenon called la Niña. If the past is any indicator, we should soon see global temperature anomaly turn negative as illustrated in the 2007-08 El Niño graph below before slipping once again into some state of equilibrium again, fluctuating within a narrow temperature band. The sharp temperature decline induced by la Niña conditions, as in the case of the El Niño temperature spike is to be treated as a blip and statistically considered an outlier.”

Global temperatures rise and fall all the time, cyclically. It’s no big deal. The El Niño causes drought and heatwaves while its sister, the La Niña cause floods and drops in temperature in the country. Anyone who arrogate themselves the role to educate the nation on climate issues should be aware of this basic fact. It is not so much that the Oxfams, ChristianAids, Greenpeace and the Sunita Narains of Centre for Science & Environment are not aware of these simple basic truths. What’s the real problem is that they only choose to highlight temperature rises and keep silent when temperature plunges. It is this selectivity that provides an impression of insincerity, a scam that they willing engage themselves into at the cost of their organizational integrity!

So let’s assume they gather the courage to react to this charge of being scamsters. What are they likely to say? You guessed it.  El Niño is climate and La Niña weather!

Posted by Rajan Alexander at 12:18 AM