As La Niña tapers off, how will the Indian Monsoon shape up? 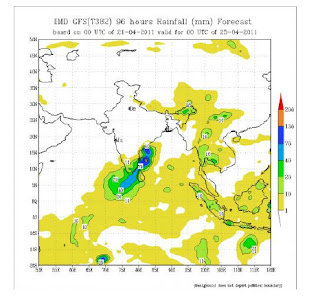 It’s the last week of April and yet no sign of heatwaves that is so typical of a La Niña summer. Instead of dry and hot weather, South India; Sri Lanka and countries in the South China Sea were actually experiencing pleasant and wet weather conditions during the last week as indicated in the Indian Meteorological Department (IMD) map. The IMD finally released their monsoon forecast, after dithering for some time.  Speaking to CNBC-TV18's Karan Thapar, Ajit Tyagi, Director General of the Indian Meteorological Department (IMD), said this year the forecast in quantitative terms is of 98%, which falls in the normal category.

"We are confident within the model areas of plus/minus 5%. In extreme cases to be below normal category, which is between 90 and 96%—to be preciously the 93%, if we minus 5% from the 98%," he said raising hopes of higher farm output that could help the government tame high food prices."

The monsoon acts as a lifeline for India's farm-dependent economy, which is also the world's leading producer and consumer of several key commodities such as sugar, grains, oilseeds and cooking oils.

"There is no abnormal global signals in the weather system to hint that there could be a drought this year," D. Sivananda Pai, Director at IMD told Reuters.

Below is an excerpt of the interview on CNBC-TV18 is given by MoneyControl.com:

Q: You are predicting a normal monsoon this year for the layman. What exactly do you mean by normal?

Tyagi: Normal monsoon is a category, which is based on the last 50 years of informed data, that monsoon will be within the range of 96% to 104% of its long term average for the four months of monsoon season. This year we have given a forecast in quantitative terms is of 98%, which falls in the normal category.

Tyagi: No. If you are seeing the table along with the probability, which we have given, and the distribution is 33% normal percentages, it will be 17% and 16% below normal and above normal. This is a normal distribution, again same category of the access and deficit rainfall. This is how the distribution of last 100 years of rainfall is there. So against the normal 33%, which should occur on average this year, we have got higher probability of 53% or so.


Q: For layman, give me a simple answer, how confident is you that we will have a normal monsoon?

Tyagi: We are confident within the model areas of plus/minus 5%. In extreme cases to be below normal category, which is between 90 and 96%—to be preciously the 93%, if we minus 5% from the 98%.

Q: The South Asian climate outlook forum has predicted that there will be a below normal monsoon both in the North West and the North East. Do you agree with that?

Tyagi: Yes to a degree. But there also the probabilities that the below normal may not be very high. They are just above the climatological averages. So we have indicated in these regions, the pockets, yes there could be below normal rainfall. If you look at North West India, it is just the areas bordering Pakistan. Essentially, it is Afghanistan and Pakistan where the below normal rainfall is predicted. But also along with them some of the areas of Rajasthan, Punjab and Haryana also are included. So this is general geographical area.

I think there is a need to tell us if at all the department is very clear about it as to what long range forecast would be.”

I am great fan of Devinder Sharma and follow his blog very carefully. But one of Sharma’s shortcomings is that he champions the cause of anthropogenic global warming (AGW) but does not appear to know much why monsoon forecasting is proving exceptionally challenging this year. For an agricultural expert it is strange that Sharma appears to have no clue about the weather and yet he champions the cause of AGW vehemently.

As per the latest data from the Bureau of Meteorology, Australia, the La Niña, which brought above normal rainfall to India last year, has run its course with the central Pacific returning to El Niño-Southern Oscillation (ENSO)  neutral conditions as reflected by the Nino 3.4 Index being 0.4 C deg. Since January this year, due to the La Niña effect, daytime maxima have been too low for ‘monsoon comfort’ since sustained heating of the northwest region is crucial to set up the keenly watched ‘heat low’ to build. The heat low builds due to sustained heating of northwest India, adjoining Pakistan and the Arabia desert.

It is these conditions what posed a dilemma for IMD in their forecast of the monsoon and they dithered finalizing it until it became clear that we have returned to ENSO neutral conditions by mid-April, which can reduce rainfall in the country. We can now hope that daytime maxima returns to normal fully in May to establish the south-westerly monsoon wind regime before heavy monsoon rains start over western India. Unlike other low-pressure areas, the ‘heat low’ is topped up by clear, cloud-free skies due to special reasons associated with the geography.

"The Busan, South Korea-based APEC Climate Centre has said in updated forecast on Monday that India might witness ‘enhanced rains' during May-June-July.This was slightly at variance with some other global models that saw a weaker start to the southwest monsoon, only to be followed by a burst mid-season till the end.

The forecast said that the East Asian coast and Indonesia will receive less rainfall than normal. On the other hand, enhanced precipitation is expected over Indochina and the Philippines, apart from India."

A normal monsoon means the country receives rainfall between 96-104% of a 50-year average of 89 centimetres during the four-month rainy season, according to IMD classification. Sri Lanka, Indonesia and Thailand are expected to witness normal rains in 2011, while Pakistan, Bangladesh and Afghanistan could see below-normal rainfall. 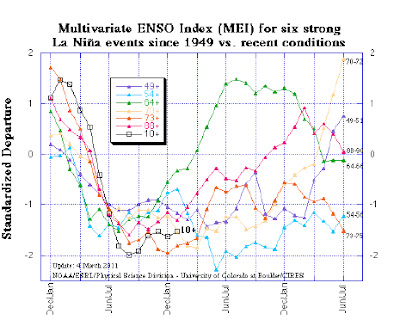 The question is have we seen the back of the La Niña for good? This is where climatologists are divided.

According to Boulder-based climate researcher Klaus Wolter, La Niña’s fade may only be temporary, suggesting that there’s a better than 50 percent chance that the pattern could redevelop next winter. This is based on historical patterns showing that strong La Niñas often last a couple of years.

How the long-term pattern develops should be clear in the next three to six months, he added.

“If you look at the historical performance (of La Niña) during the last 150 years, they have a tendency to disappear in the summer, then they come back.”

Wolter said, adding that there’s almost a direct relationship between the size of the La Niñas and their propensity to return for a second, and sometimes a third year. If the pattern does re-intensify, it probably won’t be as pronounced as this year.

"Historically, if you look at two-year La Niñas, the second year is usually much lower than the first year.”

That Wolter could be right is illustrated by the fact that while Niño 3.4 Index has turned neutral, another key La Niña Index, Southern Oscillation Index (SOI) remains strongly positive. The latest (11 April) 30-day SOI value is +25. The SOI has been consistently positive since early April 2010.  The Bureau of Meteorology of Australia  seems to share this line of thinking too:

"However, atmospheric indicators of ENSO continue to be at odds with recent trends in the ocean, and remain consistent with a well developed La Niña event. The latest 30-day Southern Oscillation Index (SOI) value (+30.2) is only a little short of the highest April monthly value on record (+31.7, recorded in 1904), and has remained consistently high throughout the event.

Cloudiness near the date-line remains below normal while trade winds continue to be stronger than normal. These atmospheric indicators are expected to return to neutral over the coming months in response to the changes in the ocean."

This means the chances of NE Monsoon being on the above normal side are high. Winter will be cold but the good news is that it would be much milder the record cold last year

For those who are interested in the Monsoon, try this excellent link: Monsoon Watch at http://rajesh26.blogspot.com.

Posted by Rajan Alexander at 1:40 PM