The Hindu: Reading the rain is like science fiction

The weather is a non-linear chaotic system which makes its events random walks, that in turn  makes its prediction an entirely elusive exercise over long periods. Any prediction of weather over 5 days falls off in progressive increasing errors for every day added. The monsoon is one of the extreme examples of the vast challenges in predicting the weather.

Climate is average weather over a long period and thus makes it also a non-linear chaotic system. The claim therefore of global temperatures will increase by 4-8 deg C is one of the most bogus claim in science. Nonetheless, we find NGOs like Oxfam, ActionAid, ChristianAid etc repeating these bogus claims without batting an eyelid. They even audaciously claim they have competence in Climate Smart Agriculture. The single most significant climatic variable that affects agriculture is the monsoon. And yet, none of these jokers even attempt to forecast the monsoon. This article in the Hindu makes it evident that even before forecasting the monsoon we need to understand the phenomenon better.

It is time NGOs realize that LIES are no substitute for effective advocacy! 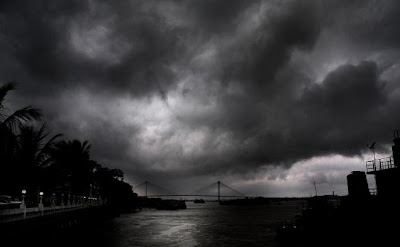 This year, the monsoon is really playing hide-and-seek. With large parts of the country receiving deficient rainfall, fear of a drought looms large. The Indian weather office had predictably said it will be a “normal” monsoon, but, so far, it has been far from normal.

Today when the United Progressive Alliance (UPA) government, in its second term, is suffering from low credibility, a failed monsoon could well become a political tipping point. The scars of a failed monsoon and the ensuing hardships are hard to erase in the minds of voters especially when the next elections are simply one season away. The constant litany from the India Meteorological Department (IMD) of a “normal monsoon” only pushes decision makers to a slumber that they need to be woken up from, if rural India’s distress is to be minimised.

This angst over whether the monsoon will bring rains has become an annual occurrence but the sad reality is that the weathermen are just not able to predict its arrival, spatial distribution and departure accurately. They are not to be blamed since the science of the monsoon remains a black box, a mystery that has not been understood despite huge developments.

Indeed, it is high time Indian scientists collectively told the government that since they can’t forecast the extremes, it is really meaningless to forecast the monsoon. The need of the hour is to go back to the drawing board to first understand the phenomenon of the monsoon and then, if ever we understand it, attempt to forecast it.

Issue of models
Forecasting the southwest monsoon is not easy. Till date in the 137 year history of the IMD, which operationally forecasts the monsoon, it has never succeeded in correctly predicting the extremes. In a rare and candid admission Dr. Laxman Singh Rathore, director-general of the IMD, New Delhi, for the first time admitted that

“prediction of extreme events is a problem since models [they use] tend to normalize things.”

This means that despite best efforts, the IMD will never be able to forecast a drought or flood for the country as a whole.

To put this in perspective, in the last 137 years the Indian weather office has never ever been able to predict a drought. Look at the basic statistics. In the last 100 years, more than 85 per cent of the time the monsoon has been normal. So the chances of a normal monsoon are always high. In the last two decades, the IMD has invariably only forecast “normal” monsoons despite the huge variations India has witnessed in bad years like the massive flooding of 1994, and the droughts of 1987, 2002, 2004 and 2009.

Experts say a forecast is only good if it can pick up early signals and warn of impending hazards so that policymakers and farmers in particular can prepare for the worst while hoping for the best. To make a point in its self-praise, the IMD always points out that from 1989 to 2000, 11 years in a row, it predicted a “normal” monsoon and it “turned out to be normal.” But a closer examination reveals that more often than not, even in this “golden period” their prediction was also actually way off the estimated margin of error allowed in the model itself.

The flaw possibly lies in the statistical model that the IMD uses to make its predictions. The current model is still not good enough. A numerical model considered more accurate is still cooking. Interestingly, for the 2012 season, the new numerical model imported from the United States actually predicts a surplus.

Interestingly, the world over, scientists find it very tough to forecast weather patterns months in advance, so in a way it is commendable that the IMD puts its reputation on the block and makes an operational monsoon forecast. Most others only do this as an academic exercise. According to India’s leading atmospheric scientist, J. Srinivasan of the Indian Institute of Science,

“no agency in the world has ever been able to predict an ensuing drought or flood for the Indian region.”

So should we not stop giving lollipops of a “normal” monsoon to the people?

Understanding the monsoon
The southwest monsoon is that life giving phenomenon which releases on the Indian land mass 80 per cent of the total annual of 105 cm of rainfall that India receives. Every year between June and September, moisture laden winds blowing in from the Indian Ocean rejuvenate the parched Indian countryside. The monsoon arrives without fail, but forecasting it months ahead is a nightmare.

Much more difficult is to give early estimates of when the breaks are likely to occur during the season. Farming, especially crop sowing, is very dependent on the timing of the rainfall. In any given year, if rainfall climbs more than 10 per cent above a long-term monsoon average, floods ensue. If it declines more than 10 per cent below average, a drought is declared. Slippage in either direction brings misery. For example, a drought in 2002 shrank India’s GDP by an estimated 5.8 per cent.

It may come as a surprise but the monsoon arrives without fail and has never delivered less than 60 cm of rain in the last 137 years of official records. But its spatial and temporal variation is vast, a fact which befuddles scientists.

Now in an effort to erase the blemish of not forecasting the monsoon accurately, the Ministry of Earth Sciences (MoES) is launching a new five year “monsoon mission” at the cost of about $75 million to better understand this complex ocean and atmospheric phenomenon. The monsoon of 2011 was an eye-opener for forecasters. The IMD had forecast that it would be a bad monsoon with rains possibly being less than 90 per cent of the long-term average, but at the end of the season, the rains turned out in excess of the long period average. Hence, in a first of its kind admission as part its end of season report, it said that it was “not very accurate” in its forecasts.

“The monsoon remains a scientific mystery,” admits Madhavan Rajeevan, a monsoon specialist, in the MoES, adding, “We are accumulating more questions than answers.”

Shailesh Nayak, a geologist and secretary in the MoES says,

‘‘understanding the monsoon will be major priority in the next five years.”

In this new Monsoon Mission, efforts will be made to understand it using the numerical models developed by the United Kingdom Meteorological Office and the American model called Climate Forecast System developed by National Centers for Environmental Prediction (NCEP) that combine data from ocean, atmosphere and land for providing long range forecasting. Mr. Nayak admits that “current prediction capabilities are inadequate” and an effort will be made to improve high performance computing.

The Indian Institute of Tropical Meteorology, Pune will take the lead in deciphering the seasonal forecasts, while trying to predict the active and break periods of the monsoon. Mr. Nayak says the bottleneck is a shortage of trained scientists. According to his estimate, in the next five years India needs about 1,200 skilled meteorologists. There are only about 350 now.

It is also widely acknowledged that even though the monsoon is a repetitive annual event, accurately predicting the natural variations is like finding a path through a minefield because the chaos of the tropical oceans and atmosphere is very hard to understand, let alone model and forecast.

It is this cracked and parched minefield that the UPA has to walk across ably to ensure that the misery of the failed monsoon does not become a contagion that might sweep it out of power. Today, India’s economy may not be “a gamble on the monsoon,” but the rains do lift the mood of the nation. And today the mood is flagging.

(Pallava Bagla is a correspondent for Science, and Science Editor of NDTV. The views expressed are personal.)

Posted by Rajan Alexander at 4:43 PM