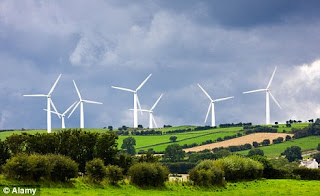 The planned shake-up of the electricity market could raise householders’ bills by more than £110 and put off investors, MPs have warned. In a damning report, they say the Government’s planned revolution in how we produce energy – announced two months ago – will not benefit consumers and needs an ‘urgent rethink’. The reforms are intended to guarantee high electricity prices for firms who invest in building nuclear power stations and wind farms to meet Britain’s green energy targets. But the Energy and Climate Change Committee claims the decision to allow energy firms, rather than the Treasury, to guarantee these prices risks higher charges for bill-payers. Committee chairman Tim Yeo, a former Tory environment minister, said the current plans would increase the power of the Big Six energy companies and ‘will not work for consumers in their present form.’

Ministers hope to put strict controls on coal-fired power stations and imported energy, while boosting renewable energy like wind, wave and solar power. The Government’s climate advisers said last year that energy bills would rise by £190 by 2020 – with £110 of this down to renewable energy policies. Barry Gardiner, a former Labour environment minister on the committee said: ‘We will lose a fifth of our generating capacity by 2020 and these reforms will not keep the lights on. ‘These plans do not reassure investors, and if there is pressure on supplies, it will drive up consumer bills. It’s vital the Government back a scheme which will incentivise investment and stop moving the goalposts.’ Last year David Cameron ordered the Big Six – whose profits per customer have soared – to do more to help customers onto cheaper tariffs.

Mr Yeo said: ‘Nobody wants to see a blank cheque written out for green energy, but the Government must provide investors with more certainty about exactly how much money will be available.’

Energy Secretary Ed Davey said: ‘The Energy Bill will enable us to make radical changes to the electricity market that deliver investment in secure, low carbon, affordable energy. We are determined to…develop a robust and effective Bill with the interests of both consumers and investors at the heart.’

Posted by Rajan Alexander at 10:34 PM