As the graph (plotted from ENVISAT data) illustrates, global sea level have been declining from the end of 2007.

ENVISAT, is the largest and most sophisticated Earth Observation spacecraft ever built. It carries ten sophisticated optical and radar instruments to provide continuous observation and monitoring of the Earth's land, atmosphere, oceans and ice caps.

ENVISAT data collectively provide a wealth of information on the workings of the Earth system, including insights into factors contributing to climate change. Its largest single instrument is the Advanced Synthetic Aperture Radar (ASAR), operating at C-band, ensures continuity of data after ERS-2. It features enhanced capability in terms of coverage, range of incidence angles, polarisation, and modes of operation. The improvements allow radar beam elevation steerage and the selection of different swaths, 100 or 400 km wide.

The Medium Resolution Imaging Spectrometer (MERIS) is a imaging spectrometer that measures the solar radiation reflected by the Earth, at a ground spatial resolution of 300 m, with 15 spectral bands in visible and near infra-red and programmable in width and position. MERIS allows global coverage of the Earth every 3 days. The primary mission of MERIS is the measurement of sea colour in oceans and coastal areas. Knowledge of sea colour can be converted into a measurement of chlorophyll pigment concentration, suspended sediment concentration and aerosol loads over marine areas. It is also used for land and atmospheric monitoring.

During the 2009 Copenhagen Climate summit, we saw their theatrics at its best which started well before the start of the Copenhagen summit. The Maldives' government held an underwater cabinet meeting in a bid to focus global attention on rising sea levels that threaten to submerge the low-lying atoll nation.

President Mohamed Nasheed plunged first into the Indian Ocean followed by his ministers, all clad in scuba gear, for the nationally televised meeting in this archipelago known as an idyllic holiday getaway for the rich. Nasheed and his deputy, Mohamed Waheed, and a dozen ministers sat behind tables arranged in a horseshoe at a depth of six metres (20 feet) and approved a resolution urging global action to cut carbon emissions. Tropical reef fish swam among the ministers and the nation's red and green flag with white crescent moon was planted in the seabed behind Nasheed.

After surfacing, he called for the UN's climate summit in Copenhagen in December to forge a deal to reduce carbon emissions blamed for rising sea levels that experts say could swamp the Maldives by the century's end.

"We should come out of Copenhagen with a deal that will ensure that everyone will survive," said the 42-year-old president as he bobbed in the shimmering turquoise waters. He said there was "less talk" during the half-hour underwater meeting, but he had managed to get more work done. "The Maldives is a frontline state and what happens to us today will happen to others tomorrow," Nasheed said.

Data from the real world has burst the hype of rising sea levels submerging coasts of various countries and island states. Nevertheless, even as sea levels were falling, it did not stop climate alarmists from executing an electrifying campaign designed to create mass hysteria which in turn was designed to put sufficient pressure on world leaders to sign a climate treaty. 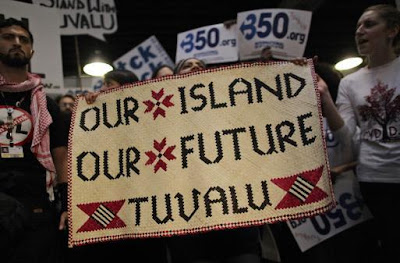 During the summit itself, Tuvalu, a small island state in the Pacific Ocean, took off from where Maldives left off. Ian Fry, its delegate in a voice broken by emotion, pleaded in the COP15 plenary room on December 12 for his country’s proposal for a legally binding agreement limiting temperature rise to 1.5°C above pre-industrial levels.

“The fate of my country lies in your hands”, he said. The plenary was moved by his words. Every normal human being had to be.  Fry continues: "Is climate science providing a basis for this emotion? Should the world accept a 2°C rise, a value which seems gaining ground, or is 1.5°C, now advocated by the Alliance of Small Island States (AOSIS) and many developing countries, a better target? Does the IPCC provide useful information on this question?"

In context to the Northern Indian Ocean, NGOs like Oxfam, ChristianAid, ActionAid etc and environmental organizations like Greenpeace and World Wildlife Fund (WWF) have been long carrying out a systemic disinformation campaign rising sea levels will directly affects Pakistan, India, Yemen, Bangladesh, Myanmar, and Thailand. This despite many Indian oceanographic peer reviewed research studies discounting such hype. The most authoritative of these studies are by Unnikrishnan, A.S. and Shankar, D. 2007 whose synopsis is provided in the table below: 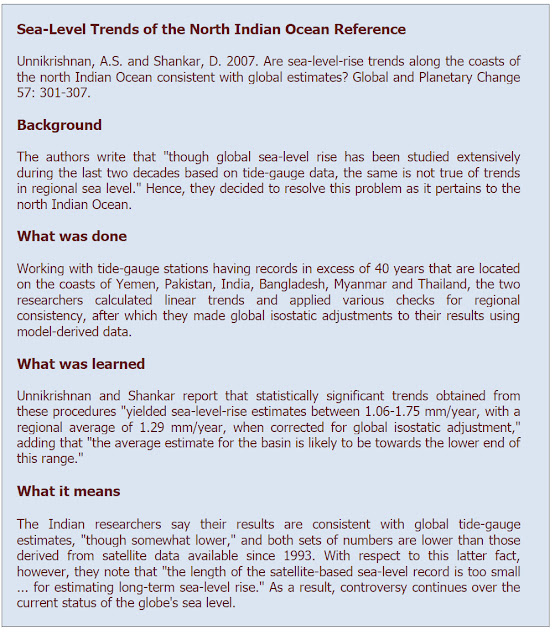 Posted by Rajan Alexander at 1:34 PM