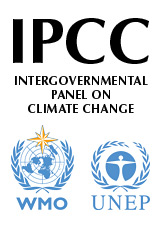 Richard Black, environmental correspondent of the BBC had been an important cog-in-the-wheel of the global warmist propaganda machine for some time now.  So it comes as no surprise that the UN's Intergovernmental Panel on Climate Change (IPCC) selected him to leak their new report which Black reviewed in his column in BBC's website.

Climate sceptics reacted cautiously to the leaked contents though it had much to chear us. But we rather wait for the official final version of the report and then rip it apart as we did with the IPCC AR4 Report of 2007. The good news about the leaked document is that efforts to alter the draft text can be tracked.

1.  The IPCC 2011 says exactly the same things as their 2007 report - climate modelling is getting better at predicting averages (predicting backwards of course) but predicting impacts adds so many more layers of uncertainty, so we're years away from decent models. The section on extreme weather is riddled with uncertainties to such a degree as to render any concept of a so-called 'consensus' on Anthropogenic Global warming (AGW) meaningless. The only certainty expressed is that of complete uncertainity! This being the case it strengthens we sceptics argument that there is nothing more dangerous than taking global actions when one does not fully understand, what is going on. Taking any actions within such a scenario would be depraved indifference to humanity. 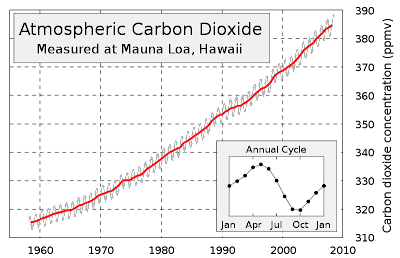 2.  The statement that would prompt sceptics to ecstasy is "Climate Change Signals Expected to Be Relatively Small over Coming 20-30 Years".  The European Commission reports that global emissions of carbon dioxide (CO2) increased by 45% between 1990 and 2010, and reached an all-time high of 33 billion tons in 2010. Till now we been told as the carbon emissions grow exponentially, global temperatures grows in tandem. But the IPCC now says, that if you looking for such correlation, forget it for the next 20-30 years. 1998, an El Niño year remains the warmest in recorded history and since then global temperatures have been trending flat.

This in turn means that if we were to look for signals of accelerated global warming, then for a stretch of 32-42 years there will be none since the IPCC expects global warming to take a vacation - apparently a long one.  Important  to note is that according to the IPCC; if there is no evidence of accelerated global warming after 15 years, the null hypothesis come into play. This means that the hypothesis of global temperatures rise correlating with CO2 rise is on its way to be negated in the next couple of years. This is the real import of IPCC admission. Can we sceptics be then blamed for raising our victory flag?

"The planet’s temperature curve rose sharply for almost 30 years, as global temperatures increased by an average of 0.7 degrees Celsius (1.25 degrees Fahrenheit) from the 1970s to the late 1990s.

“At present, however, the warming is taking a break,” confirms meteorologist Mojib Latif of the Leibniz Institute of Marine Sciences in the northern German city of Kiel. Latif, one of Germany’s best-known climatologists, says that the temperature curve has reached a plateau. “There can be no argument about that,” he says. “We have to face that fact."

In November 2009, to the run-up of the Copenhagen Climate Summit, Dr. Mojib Latif, a German climatologist,  warned that global temperatures plateaued in 1998 and that global warming was taking a break for 20-30 years. For this he was castigated and hounded out by the global warmist movement.  Latif  stands today vindicated with the IPCC itself echoing his  claim.

In IPCC speak, warming is climate change while cooling is natural variability. So it is with this report too. What Latif and the IPCC tacitly admitted was that we have entered a Global Cooling cycle, which should its acceleration after the maxima of the current Solar Cycle 24 (expected around 2013-2014). There is a phenomenon called Pacific Decadal Oscillation (PDO) which is a 25-30 year cycle. When it is positive, the world warms and when it is negative the world cools. In 2007, the PDO turned negative which explains the lack of warming and now declining temperature trend. So perhaps for the first time, the IPCC in their own nuanced way was endorsing what we climate skeptics have all along been saying. This is victory for climate skepticism should the leaked draft as reported by BBC turn out genuine.

One of the most striking new voices on climate change that's emerged since the UN summit in Copenhagen two years ago is the Climate Vulnerable Forum. The grouping includes small island states vulnerable to extreme weather events and sea level rise, those with immense spans of low-lying coastline such as Vietnam and Bangladesh, and dry nations of East Africa.

It's currently holding a meeting in Bangladesh, with UN Secretary-General Ban Ki-moon as the keynote speaker.

These countries feel vulnerable as a result of several types of projected climate impact. In increasing order of suddenness, there are what you might call "steady-state" impacts such as rising sea levels; increased separation of weather into more concentrated wet periods and dry periods; and a greater occurrence of extreme weather events such as hurricanes, floods, heatwaves and droughts.

But what can science really tell us about these extremes?

While the vulnerable meet in Dhaka, the Intergovernmental Panel on Climate Change (IPCC) will be sitting down in Kampala to answer the question. For almost a week, government delegates will pore over the summary of the IPCC's latest report on extreme weather, with the lead scientific authors there as well. They're scheduled to emerge on Friday with an agreed document. The IPPC said exactly the same things in IPPC 2007 - climate modelling is getting better at predicting averages (predicting backwards of course) but predicting impacts adds so many more layers of uncertainty, we're years away from decent models which is why we end up talking about sea level. The IPCC's latest report on extreme weather is riddled with uncertainties to such a degree as to render any concept of a so-called 'consensus' on AGW meaningless. President Nasheed of the Maldives has warned that climate change may mean the end of his nation'. He's so worried he has decided to upgrade the airports to increase tourism. You couldn't make this rubbish up. The draft, which has found its way into my possession, contains a lot more unknowns than knowns. So we have no warming over the last decade and then expect AGW signal for 30 years. So now we are talking 40 years with little or no AGW. After 40 years does weather finally becomes climate? On the one hand, it says it is "very likely" that the incidence of cold days and nights has gone down and the incidence of warm days and nights has risen globally. And the human and financial toll of extreme weather events has risen. 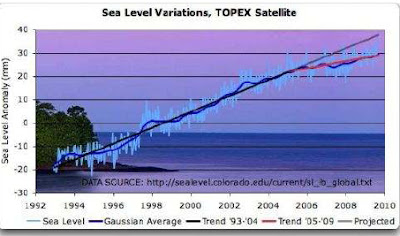 In terms of attribution of trends to rising greenhouse gas concentrations, the uncertainties continue. While it is "likely" that anthropogenic influences are behind the changes in cold days and warm days, there is only "medium confidence" that they are behind changes in extreme rainfall events, and "low confidence" in attributing any changes in tropical cyclone activity to greenhouse gas emissions or anything else humanity has done.

And for the future, the draft gives even less succour to those seeking here a new mandate for urgent action on greenhouse gas emissions, declaring: "Uncertainty in the sign of projected changes in climate extremes over the coming two to three decades is relatively large because climate change signals are expected to be relatively small compared to natural climate variability".

It's also explicit in laying out that the rise in impacts we've seen from extreme weather events cannot be laid at the door of greenhouse gas emissions: "Increasing exposure of people and economic assets is the major cause of the long-term changes in economic disaster losses (high confidence).

The succour only lasts for so long, however. If the century progresses without restraints on greenhouse gas emissions, their impacts will come to dominate, it forecasts:

* "It is very likely that the length, frequency and/or intensity of warm spells, including heat waves, will continue to increase over most land areas...

* "It is likely that the frequency of heavy precipitation or the proportion of total rainfall from heavy falls will increase in the 21st Century over many areas of the globe...

* "There is medium confidence that droughts will intensify in the 21st Century in some seasons and areas...

* "Low-probability high-impact changes associated with the crossing of poorly understood thresholds cannot be excluded, given the transient and complex nature of the climate system."

The draft report makes clear that lack of evidence or lack of confidence on a particular impact doesn't mean it won't occur; just that it's hard to tell. 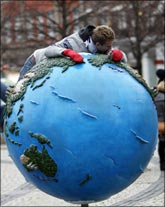 It's impossible to read the draft without coming away with the impression that with or without anthropogenic climate change, extreme weather impacts are going to be felt more and more, simply because there are more and more people on planet Earth - particularly in the swelling "megacities" of the developing world that overwhelmingly lie on the coast or on big rivers close to the coast.

He's argued for a divorce, therefore, between the issues of adaptation, which he says could usefully be added into the overall process of overseas development assistance, and mitigation of emissions. It's not proved to be a popular notion with developing world governments, which remain determined to tie the two together in the UN climate process.

Governments of vulnerable countries argue that as developed nations caused the climate change problem, they must compensate those that suffer its impacts with money above and beyond aid. Developing countries like the fact that under the UN climate process, the rich are committed to funding adaptation for the poor.

Yet as the brief prepared for the Dhaka meeting by the humanitarian charity Dara shows, it isn't happening anywhere near as fast as it ought to be.

Only 8% of the "fast-start finance" pledged in Copenhagen, it says, has actually found its way to recipients.

It's possible - no, it's "very likely" - that the IPCC draft will be amended as the week progresses, and presumably the governments represented at the Climate Vulnerable Forum will be asking their delegates to inject a greater sense of urgency.

Although there are sobering messages, they're not for everyone.

The warning that "some local areas will become increasingly marginal as places to live or in which to maintain livelihoods" under increased climate impacts, and that "for locations such as atolls, in some cases it is possible that many residents will have to relocate" are, in their understated way, quite chilling.

But very few of the world's seven billion live on atolls; so will this be enough to provide a wake-up call to other countries? It's also possible to argue that extreme weather isn't really the issue for the small island developing states, or for those with long flat coastlines.

The big issue (which the IPCC is much more confident about) is sea level rise - slow, progressive, predictable; capable of being dealt with in some cases (think the Netherlands) provided the will and money are there. But capable of wiping a country off the map if those two factors are absent. This is one of the reasons why the Climate Vulnerable Forum established itself.

They felt that although both developed and developing nations understood vulnerability in theory, they didn't get the message viscerally.

Whether they will by the end of the week when the IPCC releases the final version, I'm not so sure.