Wasted ‘Climate Change’ Cash Could Save Lives Instead 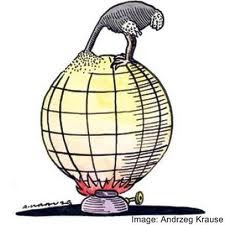 When it comes to climate change, our leaders would do well to follow Buddhist advice: when struck by an arrow, first remove it before seeking out your assailant. Otherwise, you will die.


But most governments and charitable foundations today do exactly the opposite. They try so hard to appease climate activists — who seem more concerned about the possible plight of people yet to be born than those suffering today — that millions of people have been abandoned to misery and early death in the poorest parts of the world.

The Canadian government is providing what might appear to be a generous $142 million to help victims of drought and famine in East Africa. Australia has also committed over $103 million. That is certainly far more money than either China or Saudi Arabia — the latter situated just across the Red Sea from the disaster area — are contributing. But it pales in comparison with what Canada and Australia are paying to fulfill their entirely voluntary Copenhagen Accord climate change commitments. Australia committed $599 million and Canada $1.2 billion between 2010 and 2012.

Both nations have already donated the first third of this commitment, an amount that is almost exactly the current shortfall in the international Horn of Africa Drought fund, a deficit that may lead to the deaths of hundreds of thousands of people if it is not rectified.

The Copenhagen Accord specified that contributions should be split 50-50 between helping people adapt to climate change and stopping (or “mitigating”) climate change. Australia is generally following this formula, but 90% of Canada’s first $400 million donation is dedicated entirely to mitigation.

This undue focus on mitigation of a hypothetical human-caused dangerous warming that has yet even to be measured comes at the expense of the urgent needs of the world’s most vulnerable peoples. For example, ClimateWorks Foundation — an American climate activist group that has donated millions to Al Gore’s Alliance for Climate Protection — received over $500 million from charitable foundations when they launched in 2008. This was twice as much as foundations contributed to the World Health Organization, and over seven times as much as they donated to UNICEF in that year.

Over the last two decades ending in 2009, the U.S. government spent a total of $68 billion for climate science research and climate-related technology development. Worldwide, it is estimated that Western countries alone are pouring at least $10 billion annually (2009) into global warming related research and policy formulation.

There are untold amounts being spent by corporations around the world on greenhouse gas reduction schemes, the costs of which are passed almost entirely on to consumers.

On October 27, the Climate Policy Initiative issued a report showing that at least $97 billion per year is being provided to “climate finance.” Tragically, just $4.4 billion — about 5% — of the total is going to help countries and communities adapt to climate change.

All the while, aid agencies remain drastically underfunded, even in the midst of East Africa’s worst famine in decades. Developing countries are pressured by eco-activists, media, and the UN to enable impractical “climate-friendly” energy policies that even developed nations cannot afford. At the same time, millions of the world’s poor lack access to electricity, running water, and basic sanitation.

And what is the world getting in return for this sacrifice? If the science being relied upon by the governments and the UN were correct, and all the countries of the world that have emission reduction targets under the Kyoto Protocol actually met their targets, then 0.05 degrees Celsius of warming might end up being prevented by 2050. In other words, trillions of dollars of expenditure will be wasted for an impact on climate that is not even measurable.

Clearly, the time has long since passed to take an entirely different approach to the climate hazard issue. We need to pull out the arrow, address the real wound, and leave learning more about the possible assailant to another day.

Despite the demonstrated failure of the hypothesis of dangerous human-caused global warming, a very real climate problem does exist. It is the ongoing risk associated with natural climatic variations. This includes short-term events such as floods and cyclones, intermediate scale events such as drought, and longer-term warming and cooling trends.

That such climate change is natural does not imply it is benign or gentle. Coming out of the last glacial period, during which sea levels were over 100 meters lower than today and kilometer-thick ice sheets made Canada, the northern U.S., and northern Eurasia uninhabitable, warming and cooling many times faster than our 20th century changes occurred. Even as recently as the 1920s, the “average annual temperature” rose between 2 and 4 degrees Celsius (and by as much as 6 degrees C in winter) in less than ten years at weather stations in Greenland.

Such natural changes have serious impact on human societies. From the demise of the robust Greenland Vikings to the sudden disappearance of the powerful pre-Incan civilizations of the Moche and the Tiwanaku, history is littered with examples of what happens when societies are unprepared for or unable to adapt to climate change.

Even when civilizations do not completely collapse due to extreme climate and weather changes, great calamities often ensue. Witness the extreme hardship and famine in Europe during the most severe phases of the 1250-1875 Little Ice Age, and similarly in the 1930s Dust Bowl event in America. Or how about the 1998 ice storm that paralyzed much of Eastern Canada and the Northeastern United States?

We need to prepare for such events by hardening society’s infrastructure through activities such as burying electricity transmission lines underground. Had this been the norm, the freak October snowstorm that just hit the northeast U.S. would not have caused widespread power outages.

Similarly there is a need to “waterproof” southeastern Australia, which can be expected to experience irregular drought periods in the future naturally — quite irrespective of speculative human causation. This could be accomplished through pumping fresh water into the Murray Darling Basin from northern rivers, by recycling of waste water, by the construction of new dam reservoirs or desalinization plants, and by the prevention of water waste through evaporation and leakage from irrigation systems.

There is no question that climate change adaptation measures can be expensive. But unlike today’s completely futile and even more expensive attempts to stop the world’s climate from changing, expenditure on preparation for and adaptation to dangerous climatic events will pass on a more robust and wealthy society to future generations.

And perhaps some of the billions of dollars that we choose not to squander on futile mitigation measures can instead be committed to helping populations already living at the edge of survival.

For the cast-iron reality is that all countries need to have available to them the financial resources to cope with the natural climatic hazards that nature will inevitably continue to throw at us all.

Posted by Rajan Alexander at 10:31 PM