As they discuss Global Warming in Cancun, Europe Shivers in the Coldest Winter in 100 years 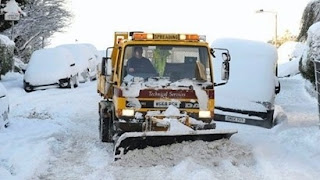 Winter Dec to Feb inclusive in Britain and Europe will be exceptionally cold and snowy – like hell frozen over at times - with much of England, Germany, Benelux and N France suffering one of the coldest winters for over 100 years. It is expected that two of the three months Dec, Jan & Feb are likely to be in the three coldest for a 100 years (e.g. using Central England Temperatures).

This is Piers Corbyn, of Weather Action who accurately predicted Copenhagen would be deluged by snow during the Climate meet last year. This time, he predicts one of the harshest winters in recent times for whole of Europe. Read more here.

Meanwhile, Europe is getting a feel of what winter may look like this week. Temperatures dropped to as low as minus 18 degrees Celsius in some parts of Germany, while driving rain in Italy triggered the collapse of two Roman walls in Pompeii and flooding in Venice. Britain, shivering in the earliest widespread snowfalls of winter since 1993, was one of the country’s worst affected with two of its major transport hubs scrapping all flights.

London's Gatwick Airport, Europe's eighth busiest passenger air hub, was shut until at least 0600 GMT on Thursday as staff worked to clear the two runways. Edinburgh Airport, Scotland's busiest, was also shut due to heavy snow showers. A spokeswoman for Gatwick said they had about 15 centimetres of snow to clear.

'We brought in extra people to try to clear the runway. We had a vast army of people. But as fast as they were clearing the snow, the quicker it settled again,' she said.

Heavy snowfall also forced the closure of Geneva International Airport where around 100 stranded passengers had to spend the night in the terminal while 200 others were sheltered by the civil protection unit as hotels were fully booked. Around 60 flights at Frankfurt airport, Europe's third busiest, were cancelled as the number of takeoffs on one of the airport's runways had to be reduced because of high winds. On Tuesday almost 300 flights were scrapped. Snow and freezing temperatures also forced French aviation authorities to cancel 116 flights from Lyon airport.

There were similar widespread problems on the roads in large parts of western Europe. Part of the M25, the London orbital motorway, was shut while there were severe delays on the M1 and A1 main routes linking London with the north. In Scotland, the Forth Road Bridge connecting Edinburgh with the north was closed.

In Italy, snowfalls disrupted traffic in city centres and on motorways in the northern Lombardy and Piedmont regions, while in Emilia-Romagna the Civil Protection Agency issued a bad weather warning until Wednesday evening. Snowdrifts and fallen trees also caused traffic problems in Germany as well as schools closures in parts of the northern state of Schleswig-Holstein. The Bild daily said that it was the coldest December 1 in several hundred years, with temperatures as low as minus 18 deg C in some places. The mercury fell in even lower in parts of Scotland with an overnight low of minus 19.8 deg C recorded in Altnaharra in the Highlands.