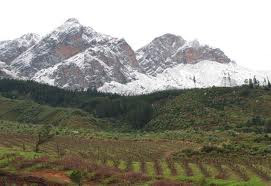 Parts of South Africa on Tuesday became a winter wonderland, but the frosty weather caused travel havoc as highways and railways closed down.

"Most of the interior in the Eastern Cape and high grounds of KwaZulu-Natal are covered in snow, which (has) caused some roads to be closed. Conditions should improve (Wednesday) as we are not expecting further snowfall except in KwaZulu-Natal," said Tshepo Ngobeni of the national weather service.

"We are urging road users, particularly those who intend travelling between Johannesburg and Durban, to postpone their trips until the snow subsides and weather conditions improve," Transport Minister Sibusiso Ndebele said.

The army was called in to assist motorists stuck in the snow along the main N3 highway to Durban, Ndebele said. Trains running from Gauteng, the province that includes Johannesburg and the capital Pretoria, were cancelled because of the snow, said the country's rail agency.

"All trains from Gauteng to Eastern Cape and KwaZulu-Natal will be affected and will result in the cancellation of services," spokesperson Leonard Potgieter said.

Posted by Rajan Alexander at 9:21 PM