This post is part of our on-going series of tracking the Monsoon. 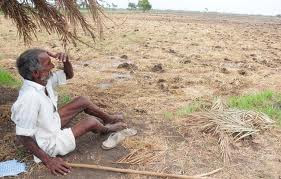 We are seeing possible early signals of an emerging El Niño. Large swathes of land within the country are already facing drought like conditions. Meanwhile in Peru, scientists are perplexed over the mystery death of over 3,000 dolphins. What causes marine mammals to die en masse? The US climatic agency, NOAA notes a number of possible causes, including infectious disease, parasite infestation, starvation (associated with El Niño events), pollution, injuries and algal blooms that release bio-toxins. The El Niño remains their primary suspect.

Asked whether he was worried about the El Niño playing spoil sport with the Monsoon, the India Meteorological Department (IMD) Director General LS Rathore told the media that:

"Yes there are chances of El Nino phenomenon emerging in the Pacific which may not favour rains in the month of August-September. But overall monsoon is likely to be normal. El Niño is just one of the parameters being considered while forecasting". 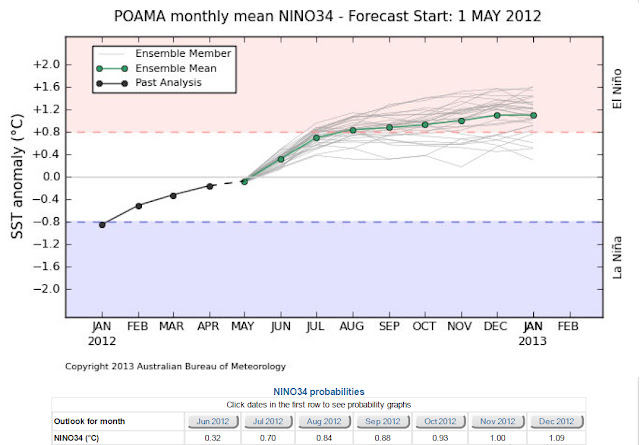 Climate indicators across the tropical Pacific Ocean remain neutral (neither El Niño nor La Niña). During the past fortnight, the tropical Pacific Ocean reached its warmest state since May 2010. However, all major indicators of ENSO, including cloudiness, trade winds, the Southern Oscillation Index (SOI) and sea surface temperatures in the tropical Pacific, currently lie well within the ENSO-neutral range. According to the Australian Met Office, the NINO3.4 SST has risen to +0.1 deg C the highest since May 2010. [But according to NOAA the latest weekly NINO3.4 SST is -0.1 deg C.] The Southern Oscillation Index (SOI) has continued rebounding during the past week, after remaining around −7 during the preceding week. The latest (6 May) 30-day SOI value is +3.7.

Though the El Niño appears currently to be virtually struggling to establish itself for the last couple of months, the latest forecast by the Australian POAMA model appears to indicate El Niño threshold values being reached by the latter part of June and strengthen right through September and beyond. The silver lining being that the expected event is most likely to be a weak one. 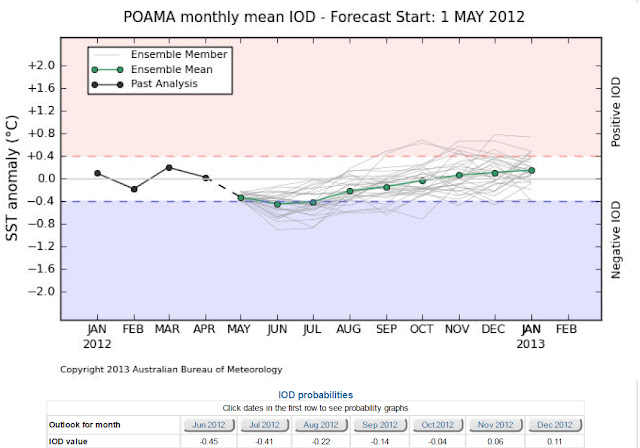 As if news on the El Niño front is bad enough, those of the Indian Ocean Dipole (IOD) is no better. The POAMA IOD forecast indicates a negative IOD right through Jun-Sept, with the period Jun-Jul it being expected to be relatively stronger. As in the case with the El Niño, the saving grace is that it is likely to be a weak event.  However, when this POAMA IOD forecast is juxtaposed with their El Niño forecast, this could result in a below average monsoon rainfall this season, if these models are right.

Besides seasonal rains should break in less than a month over the south-west coast, but they need a temperature/pressure gradient to propel into the north of the country. Sustained heating of the north-west and lower pressure over land provides just that, but the process has been delayed for almost a month now.

And this happens to be the other major problem that goes against the expectation of a normal monsoon season. Weather models had indicated a small window for heating to begin this week, but an incoming western disturbance appears to have closed it somewhat. Rain inducing western disturbances (WD) is passing low-pressure waves which set up thunderstorms, thunder squalls, dust storms, rain, thundershowers and even hail. All these serve only to put a cap on the heating process, which normally sets up heat waves to severe heat waves over north-west, central, east and east-central India.

Asked how serious this problem is, the IMD chief said the comparatively lower temperature in April will not have any impact on monsoon:

“Farmers will be able to sow crops on time in June-July, which means field crops will be at the maturity stage by the time El Nino makes its impact felt," said Jai Shankar Mishra, an agri-scientist.

So is the IMD’s optimism of a “normal” monsoon warranted?  They (and so is this blog which predicted a normal” monsoon”) maybe on the way to be proved wrong. The IMD has an awful track record but much better than the UK’s Met Office. This hardly helps in retaining a modicum of confidence in their forecast.

But the success rates of dynamic models of international climatic agencies is not anything much to write home about, though the Japan Agency for Marine-Earth Science and Technology (Jamstec) has a fairly decent track record of predicting the monsoon in recent years. Jamstec predicted that North-West India, parts of Central India and East-Central India will have below normal monsoon rains between June to August this year, a period during which the bulk of the country’s rice production grows. According to them “an unexpected developing” Indian Ocean Dipole (IOD) is the reason for the forecast for a monsoon rain deficit. The IOD replicates the El Niño-La Niña phenomenon but on a smaller scale, and is likely to reduce rains at the monsoon this year. But models like POAMA otherwise indicate the El Niño as the primary danger to the monsoon this season.

Amidst these conflicting forecasts, it is best to keep on tracking the Monsoon. Like they say, the weather has the ability to surprise you when you least expect it.  This gives almost every model an even predictive probability of getting it right. Who knows the IMD may have the last laugh? And me to??

Posted by Rajan Alexander at 11:58 AM