WWF in crisis: Faces prospective bankruptcy as Brand “Panda” crashes and with “Greens” deserting them in droves 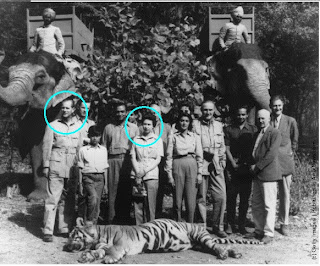 A few months before the Queen Elizabeth's German and Nazi leaning husband, Prince Philip, launched the World Wildlife Fund (WWF) in 1961, he went on a tiger hunt with the Queen in India. A tiger was lured into range by tethered goats and shot dead by Philip who brands himself a conservationist and environmentalist. WWF was not created to save endangered species, Ian MacPhail, the WWF’s first International Appeals Director, told a British television crew in an off the record interview as an explanation to the incident when a mother elephant and her calf came into range,  Philip shot the mother point blank while her calf ran off in terror! Due to respect for royalty, this incident was hushed up  but re-surfaced in the media after many decades as news headlines.

Like father, like son, like grandson. According to a FOX News report, Prince William drove a metal tipped 7 foot long spear through an antelope while on holiday in Kenya and killed it for the fun of it. The prince had been taking hunting lessons from a Masai tribal member. And just like his father, Prince Charles before him, Prince William will one day inherit the Chairmanship of WWF.  Ironically, individuals like Prince Philip and his dynasty, with a lust for animal blood, moulded WWF to successfully masquerade as an entity, now accepted to be the number one nature conservation organization in the world.

But the question is why they needed to take to masquerading in the first place? This suggests that all along they had a hidden agenda and this raises another question - what’s this agenda really all about? They managed to hoodwink the world for 60 long years by concealing this agenda through the respectability conferred by membership of individuals in high places such as Prince Philip and the influence their commanded within the global media; corporate houses and the common masses.

But all this changed with one great documentary, Der Pakt mit dem Panda (English version The Silence of the Pandas) which was broadcasted on German TV June 2 last year. Even before its initial screening, the film clearly stirred the German affiliate of the WWF. Attempts were made, through warnings and media attorneys, to influence the broadcast, if not cancel it. Yet, the single broadcast was viewed by some 900,000 German viewers, despite the very late hour of its telecast. As its video went immediately viral on the web; WWF lawyers, desperately but swiftly, succeeded in getting a court injunction against the U-Tube video on the ground of “Copyright Violations”.

However the pre-screening interview of the documentary which a German TV channel had with its award winning director, carrying snippets from the film, is still available and which you can watch by clicking the arrow of the above video. The video is in German though English sub-titles are also shown.

They may have got a court injunction that prevents us from seeing this explosive documentary. But make no mistake that the damage had been already done as this surely will have to be billed as the biggest PR disaster WWF faced in its entire history.

As they say bad luck comes in threes and as if to prove this saying right, WWF Office was burnt down by protestors in Jakarta angry with their “Sustainable Palm Oil” programmes in the country and the expose of a series of scandals involving WWF staff fraud, the most media covered one was one by their Tanzanian office.

WWF Germany responded by publishing a 23 points fact-sheet refuting all these accusations. But when established by hard data that they went to bed with Monsanto for a price to promote GM, and in the process, grabbing land from poor farmers, their credibility ended up in tatters; there were little takers for their laboured explanations.

Tens of thousands of supporters put an end to their regular donation to the organization and worse still many institutional donors like governments of Norway etc have kept their funding to WWF on hold.  Corporate funding of WWF has also reportedly taken a huge hit. Products with endorsement of WWF’s “Green Panda” are experiencing a huge downslide in sales with product managers now contemplating whether they are better off without the Panda’s endorsement. WWF International and many of their country offices are now running at huge deficits and it is only matter of time they take to downsizing staff and their programmes world over.

But what was it in the documentary that WWF considered explosive to its image? It confirmed what many including this blog had been saying all along - environment and climate change was only convenient issues for NGOs like WWF to build a deeply greased, money making machine by selling out environmental movement to corporate interests. As one blog observed:

“To impose global ‘solutions’, the elite need global ‘problems’... and the environment is perfect for that. It allows them to pass international laws and create centralized, global organizations to police them. It allows them to move native peoples from their ancient lands to create wildlife parks and ‘conservation’ areas all over the world, particularly in Africa and the Americas, which then come under the centralized control of the elites. It gives them footholds in strategic areas where they can launch ‘freedom fighters’ to start civil wars.”

The documentary offers the hard evidence that spreading environmental hubris and climate lies is a most lucrative business. It also provides the proofs that public donations are not used to save troubled and endangered species that feature in their lavish commercials. On the contrary WWF is exposed as a big promoter of the palm oil plants, a bio-fuel which is a major factor in habitat destruction and a primary cause of growing global hunger and food inflation. But what’s even worse is the fact that they are a big promoter of carbon taxes and other green lies about fossil fuels that undermine the very future of the people who donate money to this Green Dragon of Lies.

The environmental movement put their heads down in shame to find Jason Clay – WWF International’s Vice president – clearly taking on a pro-Genetically Modified (GM) stance. The documentary also covers destruction of rainforest for palm oil and the Soya–RTRS-poison story. Since 2010 Monsanto's genetically modified soybeans have been certified as "sustainable" by the "Round Table on Responsible Soy" (RTRS). The certification system was created at the initiative of the WWF. It clearly establishes the NGO-Corporate nexus operating to influence global policies that further their economic interests and what a farce the certification industry has reduced themselves into.

The world has finally woken up to the scam WWF is all about. And yet as Dale Stiller writes from Australia that:

“While the WWF is in the business of telling other people what to do, this organization is itself not accountable to anyone.”

Over the years we have seen WWF as a coalition partner for many NGO networks and organizations. For example Oxfam collaborated with WWF to publish papers: Resource Scarcity, Fair Shares and Development and Out of the Bunker – Time for a fair deal on shipping emissions.  WWF being a member of the organization 350.org network which describes themselves as a global grassroots movement to solve the climate crisis. Surely, the WWF Panda now has become a liability and the question is whether these NGOs will now take steps to disassociate with WWF or act thick skinned, pretending that nothing has changed in their relationship or affect the credibility of their collaborative papers or programmes?

And how can it not affect next month’s Rio-20 Sustainability Summit with WWF playing a significant role as facilitator of the summit.  Rajendra Pachauri, Chairman of the UN Inter-governmental Panel on Climate Change (IPCC) should be really a worried man. The credibility of IPCC’s last report had fallen by the roadside, partly due to the WWF’s grey research liberally used which IPCC passed off as credible “peer reviewed research’ and the dependence on a large number of WWF activists who masqueraded as climatologists. In their next report to be published later this year, these two shortcomings in the IPCC process have not been fixed. So climate sceptics would have field day destroying its scientific robustness.

Read Lars Langenau’s Full story:  WWF and Industry - the Pact with the Panda