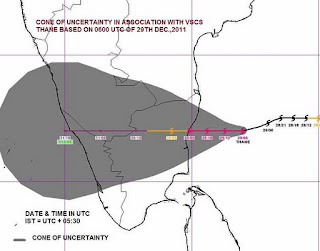 India Meteorological Department (IMD) has had a mostly successful outing tracking the very severe cyclone ‘Thane' to its logical conclusion. According to Dr Ajit Tyagi, Director-General, IMD, the storm had developed over the Bay of Bengal during the last week of December.

It went on to cross the North Tamil Nadu and Puducherry coasts between Puducherry and Cuddalore between 6.30 a.m. and 7.30 a.m. on December 30, 2011 with a wind speed of 120-140 km/hr. The system was continuously monitored and predicted since December 24. The Special Weather Outlook and Tropical cyclone Advisory were issued during 25-31 December giving details of the storm and its forecasts, warnings and advisories to various national and international agencies.

The bulletin was issued to the control room, National Disaster Management (NDM), Ministry of Home Affairs, and other high officials at the Centre and to concerned States and Union Territories, viz., Andaman and Nicobar Islands, Puducherry, Tamil Nadu, and Andhra Pradesh.


The Area Cyclone Warning Centre, Chennai, of IMD, issued various user specific bulletins including fishermen warning, port warning, coastal weather bulletin, sea area bulletin, four-stage warning for State and districts disaster management officials. The forecasts and warnings were also issued by Cyclone Warning Centre, Visakhapatnam; Meteorological Office, Port Blair; and Meteorological Centre, Thiruvananthapuram. The genesis of the causative depression over the southeast Bay of Bengal was predicted 36 hours in advance, i.e. on December 24. The first bulletin issued in the evening of December 25 with the formation of depression indicated the formation of cyclone and its movement towards the Tamil Nadu coast. The average track forecast errors for 24, 48 and 72 hours lead time have been 77, 160 and 181 km, against the long period average of 150, 250 and 350 km, Dr Tyagi said. The average intensity forecast errors for the same lead time period were 10, 16 and 21 knots respectively.

The landfall point error (km) for 24, 48 and 72 hrs lead time were 20,160 and 140 respectively. Landfall time error (in hours) for the same period of lead time was one hour. These error values are quite low, Dr Tyagi said. The timely and accurate warning helped the disaster managers to initiate appropriate action.

The only conceivable area where the IMD may have erred in a larger margin than anticipated levels is in the rainfall forecast made for North Tamil Nadu, Dr Tyagi said, which failed to add up. But the occurrence of heavy to very heavy rainfall over Andaman and Nicobar Islands, Tamil Nadu and Puducherry, South coastal Andhra Pradesh and Kerala were well predicted, he said.