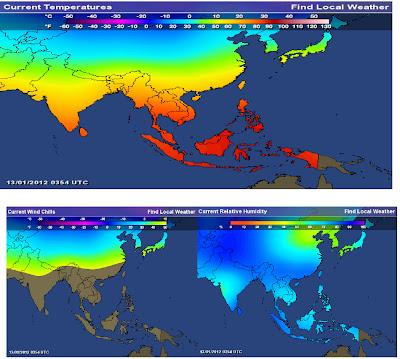 The last Western Disturbance (WD) in January 10th, apart from triggering  temperature plunges, also through massive snow disrupted the road transportation network and public utility services such as electricity, water supply and telecommunications in states like J&K and Himachal Pradesh. These states have slowly limped back to normalcy.

As seen from today’s temperature map, the Indian sub-continent is relatively cool, with parts of North and North West India relatively colder. Snow is confined to a narrow band within the country viz J&K, Sikkim and Himachal Pradesh, Arunachal Pradesh etc.  Temperatures even here by and large are less than minus 20 deg C.  Minimum temperatures in other parts of North and Central India are in single digits though it may feel 1-2 deg C more colder due to wind chill effect.

This could all change. A fresh WD called J2 is expected to affect Western Himalayan region and adjoining plains from 14th Jan 2012 onwards, bringing back snow, fog and rains over disparate regions of the north and northwest. The passage of the past few western disturbances and its warmth to the east of the country has already left the northwest literally in a cold wave. The fresh one will plunge temperatures and increase snow chaos even further.  With the troposphere already below freezing level and together humidity at around 80%, the coming WD could prove to be the most treacherous for the season as of now.

"The areas in the vicinity of Srinagar i.e Gulmarg, Sonamarg, Pahalgam shall see another major snowfall which may even stress upto Vaishnodevi and other areas. The Kargil Valley, Suru Valley, Ladakh, Zoji La shall also get snowfall. Srinagar also will see snowfall ! In Himachal Pradesh, heavy snowfall is expected in the areas like Shimla and vicinity, Lahaul Spiti, Manali and vicinity, higher passes

Considering the presence of cooler atmosphere, areas of Punjab like Pathankot where it did snow may even get another snowfall ( light) which will depend on the type of the system and its intensity. The plains of Punjab, Haryana, J&K, Himachal Pradesh, Uttaranchal will get rainfall and isolated thunderstorm also followed by fog.

The Western Disturbance shall reach by 14th Jan 2012 where snowfall is expected (Light) in Central J&K. On 15th Jan i.e Sunday the W.D will precipitate snow and rain in the areas mentioned above which will relax by 16th Jan 2012 late period"

Rajesh Kapadia who is tracking J2 in his blog Vagaries of the Weather had this to comment: 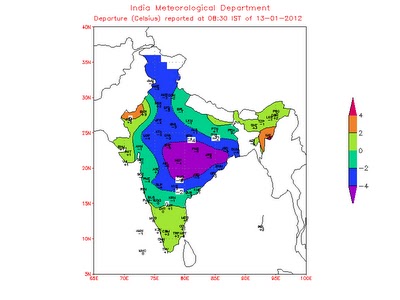 As J-2 approaches the sub-continent, the night temperatures have shown a marginal rise. For India, the nights have become above normal starting from the extreme west. (See Map).

In Pakistan, though the Northern regions are still showing cooler temperatures, the South and Central regions are slightly warmer. Karachi has risen to 13c and Sukkar to 10c

J-2 will precipitate over Northern Pakistan, areas above the 30N line, from Saturday. Heavier in the Northern most regions, and tapering intensity Southwards.


On Saturday, the North Indian States of Kashmir and H.P. would get snow/rains, and cloudy in Delhi, Punjab and Haryana. Heavier intensity would occur on Sunday in Kashmir and H.P. Snowfall would be in the range of 40-60 cms in Gulmarg, Pahalgam and Lahaul regions of H.P. Srinagar can expect snow too, as the day's maximum are below freezing since the last 5 days.

But, J-2 , it seems has a shorter life span, of just about 2/3 days. I would expect Pakistan to be clear from Monday 16th, and the North Indian regions would go dry from Tuesday. A prevailing "high" is likely to dis-integrate the system, allowing just about a day's precipitation in Utteranchal. Nepal would get its share only in the western regions. Kathmandu would be just about cloudy on Monday/Tuesday.

·       Westerly gusts on Sunday could bring clouds to Karachi.
·       Strong WD winds are likely to sweep the lower Sindh (Pakistan) on Sunday 14th.
·       From Monday, the winds will diverge to NW, bringing down the night temperatures.
·       Kutch and Saurashtra region of India will be swept by strong NW winds on Sunday and Monday.
·       Strong Northerly winds from Monday will bring a fall in temperatures in Northern plains of India, including Delhi. 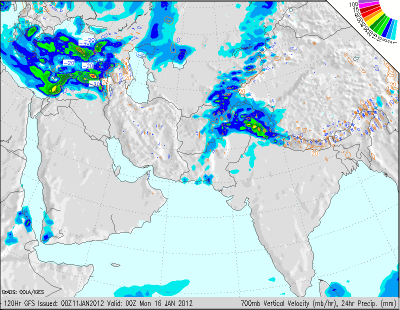 For those unfamiliar with the term western disturbance, here’s a primer.

Western disturbance is a local name for a global phenomenon. The rest of the world calls it extra-tropical wind or storm or system. Unlike the tropical cousin, which forms over the oceans picking up water, the western disturbance sweeps through the globe, to rain where it hits odd geographical shapes. In India's case, the Western Himalayas do the trick.

These extra-tropical systems travel in the form of waves in the middle and upper tropospheric Westerlies with an average speed of 10 deg. longitudes per day, says Dr Akhilesh Gupta of the National Centre for Medium Range Weather Forecasting (NCMRWF). Their magnitude is of the order of 20-30 deg latitudes. "The western disturbance is like a mother. When it hits these patches, it delivers off-springs that are far more petulant and bring showers, while the mother disturbance itself continues down, showering a bit in the northeast before it goes along to China," explained Gupta to the Hindu Business Line.

Come winter, weather events over northwest and north India come to be influenced by low-pressure systems originating in the Mediterranean Sea or the West Atlantic, which slide past Iran and western Pakistan to make their way in. These are aptly called western disturbances (WDs), and they join the monsoons, cyclones and severe thunderstorms in modulating the weather over the mainland. Orography, vegetation cover and land-sea contrasts play important roles in this process.

Over the Indian region, their frequency peaks during winter. About two to three are known to traverse northwest India during a winter month. But their number varies from year to year. They quite often interact with monsoonal flows giving rise to widespread rainfall over northwest India during monsoon. During summer, they help moderate the weather in the plains. Heat waves generally occur when WDs are fewer in number.

WDS are known to induce `secondaries' in the Persian Gulf. They pull moisture from the Arabian Sea to produce reasonably good precipitation. Winter rains brought about by these systems are crucial for rabi crops in northwest India. They travel eastwards in higher latitudes of 30 deg N to 60 deg N and barge into the western Himalayas. This topography helps extract the moisture and make the belt within 34 deg N to 36 deg N receives maximum rainfall.

WDs approach the Indian subcontinent from the west in the form of a trough in the upper and middle tropospheric Westerlies. They occasionally deepen after entering the Indo-Pak area, particularly over Rajasthan and Punjab. The intensification is the combined effect of incursion of moist air from the Arabian Sea (or sometimes from the Bay of Bengal) and the orography of the region. Typically, the typical day-to-day changes in weather in northwest India when a WD passes in winter start with the build-up of low and medium clouds making for partly cloudy skies. 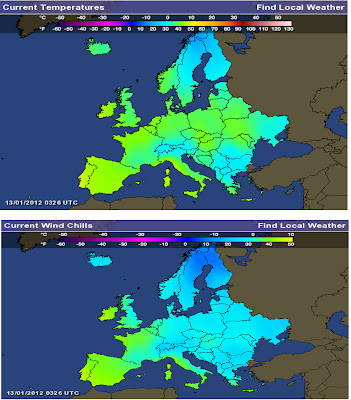 As seen from the maps, winter temperatures in Western Europe have been rather mild, though strong wind-chills may make it look much colder.

Last month was one of the warmest Decembers on record. The mild winter – particularly in comparison to last year’s record-breaking chill – has confused many flowers, causing them to blossom weeks early. Snow drops, daffodils, geraniums, and hellebores have all been seen well ahead of their normal season, while camellias in Surrey, are flowering months early.

But that is all set to change.

The UK Met Office has today issued a Cold Weather Alert for this weekend as forecasters predict a sharp drop in temperatures across England. The alert warns:  "A marked temperature change into the weekend as high pressure brings settled but cold conditions. This looks set to persist into next week and the warning is expected to be extended over the coming days.” Met Office spokesman Dan Williams said that despite plummeting temperatures, the dry conditions mean there is little risk of snow, although hail and sleet is expected in eastern regions tomorrow night.

An anticipated high-pressure system is expected to bring an end to the current spell of freak mild weather, which has triggered the early bloom of spring flowers. The freezing temperature warning will last across the weekend but is expected to be extended into next week. Temperatures as low as minus five are expected to freeze many parts of England from Friday night.

Forecaster Jonathan Powell, from Positive Weather Solutions, said: ‘Expect a raw five or so days with some bracing temperatures, hard frosts, and treacherous driving conditions. Dense freezing fog will descend, along with icy stretches on the roads. Milder weather will eventually return but we can expect more of this before winter’s out.’

Posted by Rajan Alexander at 2:34 PM