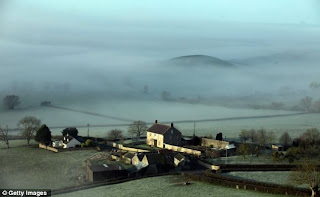 The early signs of spring that have been in evidence after a mild December look set to be blasted away over the weekend as temperatures plummet across the country.

The Met Office has warned that severe cold weather in parts of the country could increase the health risks for the very young, very old and vulnerable patients. The weather could also disrupt the delivery of services, it said. Sky News meterologist Chris England said:

"After a period of southerly winds, which have kept it very mild, a northerly flow has brought some fairly clear, cold Arctic air across Britain and Ireland.With a high pressure system developing over Britain, that cold air is going to hang around for a while, bringing sunshine by day and a widespread frost by night. There will be some mist and fog as well, some of it dense and freezing.

The cold snap will be a shock to the system, but it is worth remembering that temperatures will only be around average for the time of year - the recent warmth is the oddity."

The cold weather is expected to hang around until at least Monday, with the North West, North East and Yorkshire & Humber regions of England expected to be hardest hit.

Daffodils and crocuses have already bloomed in some parts of the country due to the mild winter but the cold snap could nip that in the bud.

Wildlife experts also said that the sudden cold weather could bring an influx of wintering birds to the UK's reserve after the mild winter kept some birds further north.

Last winter was the coldest for 31 years in the UK with an average December-February temperature of 1.51C, and research suggests that warmer Arctic summers may be bringing repeated colder winters.