An assessment of current alarmist propaganda. 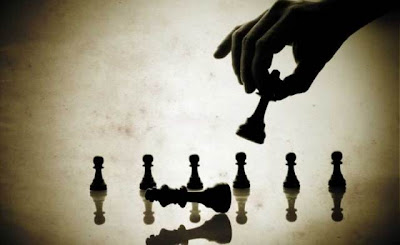 (Pointman's) It’s been obvious for some time, that the science behind the most alarming claims about the effects of any putative global warming, is not only unsustainable but indefensible. We still of course get the occasional paper, trying to resurrect an old scare, which has already been demolished, but as happened with both the Shakun and Gergis papers, the climate skeptics simply tear them to pieces. Not only hasn’t the paper succeeded in clawing back any ground, but because it gets eviscerated in public, it actually becomes a propaganda liability. This is the reason we’re seeing fewer of such alarmist papers.

To an interesting extent, the climate alarmists were influential in creating the shape of the skeptic community, but the irony is, they still have no fundamental understanding of it. This has always been the problem in their attempts to exert control over it, nearly all of which have been futile. Every time a new wheeze was thought up, to slip past some dubious piece of science, the skeptics picked it over until they found the flaw and exposed it. Sometimes they had to get up to speed with an unfamilar branch of science to do it, but that long ago became par for the course.

There is another factor too. While there are a number of declared scientists commenting from the skeptic viewpoint, my estimate of it is that the number is actually significantly higher. To my eye, the content and writing style of many long-term anonymous contributors, indicates a science background, and in some cases, people I think working in the field of climate science itself or a closely related one. The anonymity of the blogosphere is letting them speak their mind freely, without fear of any repercussions on their careers. Certainly, I have the benefit of several private email conversations with people, who don’t feel at liberty to comment in public on some of the pieces here. I’ve no doubt that other bloggers have similar correspondences. When it comes to information sources, access is everything, as they say in intelligence circles.

The bottom line is that it’s become increasingly difficult to base propaganda events on sensational climate science papers.

Over this year, the response by the alarmists to this problem of not being able to push the shonky science, has been to back off it and reposition the emphasis on a more populist type of propaganda. I suppose the thinking behind this change of approach, if there is any, is that because it isn’t based on any hard science, we’ll have a more difficult time working out how to debunk it. As I said, they really don’t understand us.

Tactically, this change of strategy manifests itself in two methods; polls about global warming and attack papers, thinly disguised as psychological studies of skeptics. While both of these seem to have some statistical or psychological legitimacy, and therefore the hoped for authority, the whole change in propaganda strategy is, I think, deeply flawed.

The fact that I’m talking about a change in strategy, shouldn’t be interpreted as me believing that there’s some central organisation that has re-evaluated the deteriorating alarmist situation, and decided on a change of tack. It’s more a case of the true believers desperately looking for something to get the stalled bandwagon back on the road, and hitting on the same wrong ideas. With the resources at their command, Lord help us if they ever learnt to think strategically, but at the end of the day, they’re good at battles, but terrible at campaigns, because being hopelessly optimistic about results, blinds them to thinking things through.

While the polls are rigged to give the impression of various specious things, the main one is that the vast majority of people are still very worried about global warming. The results are always headlined in the climate-fixated elements of the mainstream media, such as the Guardian, but there are a number of problems which seriously reduce the propaganda impact of such polls. 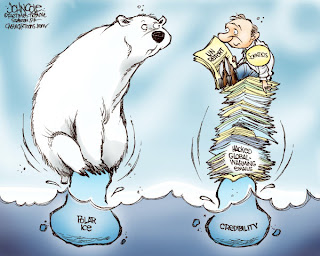 The target audience for these polls is the general public, but indirectly, it’s also aimed at politicians, in order to convince them that global warming is still a deep concern of electorates. The politicians know better and in the main, have dropped the environment well down their scale of vote winning issues, and are quietly defunding green subsidies and initiatives. Money really is tight and needed to remedy more immediate problems.

Most people are now indifferent to climate scares, a phenomenon known as climate fatigue in publishing circles, so the poll stories are being carried in a decreasing number of mainstream outlets. Progressively, the propaganda is only getting out to the true believers, who’re not the audience it’s aimed at. The reality is that we’re living in the come down times of post-Copenhagen euphoria. Whether the majority of people still believe in global warming is debatable, but what’s beyond question, is that they no longer care about it. It’s at the bottom of most people’s priority list, because of economic hard times.

Asking people to worry about the environment or their remote descendents, when they’re coping with a shaky economy, higher taxes, job insecurity and looking at utility bills they’re struggling to pay, is a poor move, especially when there are considerably better ones on the board.

They’re like those elections held periodically by dictators. They always get 99% of the votes, but everyone knows it’s humbug and ignores it. The obviously unrealistic polls are frittering away what’s left of their credibility. It’s for that reason, I feel these polls will actually become infowar liabilities.

The so-called psychological studies, I find interesting and encouraging for a number of reasons. Politically, it’s the usual stereotyping of the opposition, a way of dehumanising, and therefore writing off their influence as insignificant. There’s nothing new about the particular stereotypes they’re trying to shoehorn us into, just that they’re trying to come up with some pseudo-psychological justification for it.

There is a real perception issue here, on both sides of the fence, which has to be recognised. The climate realists think that such stereotypes are just deliberate propaganda ad hominems, meant to marginalise us and nothing more. However, the alarmists have spent so many years pushing them, that they’ve long ago come to think of them as the reality. It’s how they actually think we are. It’s another one of their unfounded beliefs, and it’s been our asset for some time. If you don’t really understand the opposition, how can you possibly design strategies to beat them?

The effect such studies are intended to have on the average person is quite simple; if you don’t believe in global warming, then you’re in danger of being seen as belonging to one of those deranged stereotype groupings, and you wouldn’t want that, would you? It is a subtle form of intimidation. Again though, for the ordinary person, it’s not a question of whether they believe in it or not, but that they no longer care about it.

The tone and intensity of these studies is becoming increasingly aggressive. The word denier is now appearing in published papers and the vileness of the stereotypes we’re accused of being, is getting worse. At face value, the reason for this would appear to be frustration at the lack of success in using them, but the truth is a bit more subtle. They’re fighting a losing battle with public opinion and they know it. Their support is melting away more rapidly every day and most frighteningly, they can’t seem to find a way of stopping that, never mind slowing it down.

Simplistically, it’s just name calling and they need to do it for reasons of catharsis. Psychologically, it’s a form of self-indulgent displacement activity. Giving us what they think is a bloody good kicking, makes up for their feeling of helplessness in the face of the grim reality of their situation. We’re their hate objects, the ones they totally blame for the collapse of their cult. They’re in the first stage of the death of their belief system; anger. Calling us bad names is a release of that anger and it’s going to get worse, considerably worse.

I’ve no problem with that, and the worse it gets, the happier I’ll be. We should be prepared to do exactly nothing to stop that inevitable escalation. We should help it along by doings things like running the Climate Prat of the Year award. Humour in the face of fanaticism, is guaranteed to enrage a fanatic every time.

The only ground worth fighting for in this debate, is the middle ground, commonly known as public opinion. The harder they fight and the more extreme the propaganda becomes, the more they’ll alienate the common person, who’ll begin to see them for what they truly are; fanatics. I said in a previous piece on fanatics, “a fanatic’s real strength is that they’ll never give up, never rethink their position, are not proportionate and above all; don’t know when to stop.”

Gleick and the Heartland debacle will not be an isolated event. Over the next year or two, we’re going to see some propaganda disasters, produced by the fury of a dying political movement and that natural compulsion of fanatics towards excess. All we have to do is wait, watch and be ready to exploit such events ruthlessly.

More importantly, in the long-term that same shrill stridency will also gradually isolate them from the politicians and policy makers, which will move them inexorably towards the political fringe.

The executive summary of this assessment is that all that’s currently happening, is the propaganda is mainly funneling in our direction and because of the gradual shutting down of mainstream outlets, not getting out to the vast majority of the populace. On the occasions it does, it’s such a badly formed and inappropriate message, it’s actually contra-productive.

In the long term, the real damage that will be caused by this clumsy infowar strategy, is that it will start closing down propaganda outlets. As the polls and studies begin to look more and more like vitriolic political invective, how much longer will the supposedly respectable science journals feel able to continue publishing them? As the alarmist message being pushed at an increasingly disinterested public gets harsher, more threatening and more extreme, how long will the climate unaligned organs of the mainstream media think they’re news worthy enough to run?