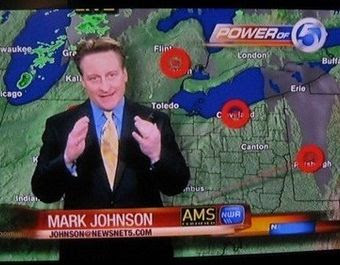 An email forwarded to me informs me that The American Meteorological Society (AMS) has once again re-affirmed their policy supporting anthropological global warming (AGW). But I was totally intrigued why the email chose an innocuous news item to circulate among influential members of our government and media including our Prime Minister and former Environmental Minister.

Was it the point of this email that this policy re-affirmation by AMS was construed by it as a major victory for AGW?

To answer this, we need first to put AMS into perspective. The debate over global warming has created many predictable adversaries such as between climatologists affiliated the UN Inter-governmental Panel on Climate Change (IPCC) and skeptic climatologists on one hand and an overwhelming majority of the meteorologist community and climate alarmist scientists on the other hand.

Surveys after surveys have shown that climate skepticism are pretty widespread among TV weather forecasters most of whom have a degree in meteorology and other related fields in climatology. This gives climate sceptics an undue advantage in moulding public opinion within the climate debate.

“What we’ve recognized is that the everyday person doesn’t come across climatologists, but they do come across meteorologists,”

said Melanie Fitzpatrick, a climate scientist for the Union of Concerned Scientists.

The AMS is the largest membership based organization of meteorologists in the US - about 14,000 strong. This is only because they confer its coveted seal of approval on qualified weather forecasters in the US that are important for career considerations, especially freshers. 80% of their membership is accounted by climate sceptics.

These include weathermen legends like John Coleman who founded the Weather Channel; Anthony Watts who now administers the world’s most popular climate change blog, WUWT; Joe Bastardi of formerly Accuweather etc. Because of AMS’ AGW policy, many of these legends cancelled their certification with the AMS. A significant majority though still retaining their membership, cook a snook at the AMS by spewing out their anti-climate alarmism venom on a daily basis.

So why are meteorologists more likely to take to climate skepticism?

Polls show that a vast majority of weather forecasters, about 75-80 percent, distrust models of climate change. Weather models are usually only accurate in predicting five- or seven-day forecasts. A common belief of broadcasters is that climate models are just as fallible. Joseph D'Aleo the first director of meteorology at The Weather Channel explains

"The forecasters live in the real world. They know models in general, and they know these models don't even get tomorrow right. They aren't going to trust them to be right about what is going to happen in 2100."

We in India should instinctively appreciate this logic having the ready illustration of monsoon predictions going haywire, year after year. This year was no exception - with not a single international model, including those of the Indian Meteorological Department (IMD) on course to getting it right.

So finding themselves totally impotent to stop climate skeptic weathermen from influencing public opinion on the climate debate, the AGW lobby did the next best thing. Get the AMS to endorse AGW. And how would they do that? By offering liberal funding just as the West offers our NGOs to advocate adoption of policies friendly to their interests herein  this country.  Lord Monckton, former adviser to Margaret Thatcher, in a lighter vein exposed such funding to AMS in his article Climate ($$$ and) Change. Read here. 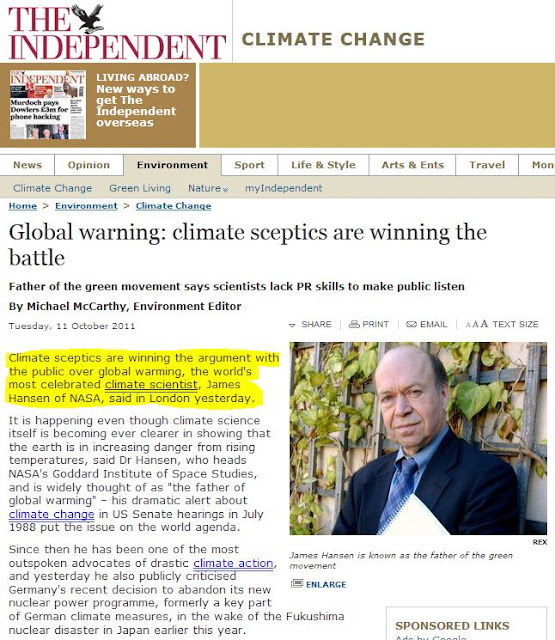 That’s not all. Leading luminaries of AGW including Dr James Hansen, considered the Father of Global Warming and their high priests, Al Gore and Dr Rajendra Pachauri have conceded that climate sceptics are winning the debate. Read here.  So just because the AMS re-affirmed AGW is not going to overturn this admission that climate alarmists are fighting a losing battle.

The AMS first embraced AGW as a policy in 2007. Strangely, while choosing to re-affirm its AGW policy outlook in 2012, they parroted their same old “consensus” statements without any actual new intellectual contribution or empirical evidence:

"Turning to the causes of such drastic changes, the AMS concluded that although the climate is always changing in some respects, the melting of the polar ice sheets, extreme flooding, intense droughts and the retreat of most of the world's glaciers "are beyond what can be explained by the natural variability of the climate."

In short what the AMS repeats like a parrot is the Principle of Exclusion:

“We have no empirical proof that human carbon emissions are the main cause of planetary warming; the “proof” is that we can’t find another explanation.”

So despite this the AMS reaffirms that a possible causal connection between human carbon emissions and temperatures is settled, certain, and, beyond debate notwithstanding the fact that there is no scientific empirical basis for such a confidence.

The fact that AMS has no explaining for weather extremes like floods and droughts other than assumed to be caused by anthropological influences doesn’t mean others don’t have explanations.

“...climate change signals are expected to be relatively small compared to natural climate variability".
In plain IPCC speak, it means that the signals of the positive external forcing of CO2 (global warming) for the next 2-3 decades is expected to be overwhelmed by forces of natural variability (global cooling) in future!

Just two weeks ago, NOAA, US premier climate agency published a paper in the Journal of Climate found regional precipitation trends from 1977-2006 were related to natural variability of sea surface temperatures, not man-made greenhouse gases or aerosols. The finding contradicts claims by alarmists that mankind has "loaded the dice" for more droughts, floods, and extreme weather. Read here.

So the AMS reaffirming their AGW policy offers no conceivable benefits to “the cause” of climate alarmism. On the contrary, it offers only further downslide to “the cause”. Climate sceptics have decided that Enough is Enough. They are going to form a new meteorological association in the US that advocates climate scepticism to expose the AMS of lacking a representative character in policy making!

Posted by Rajan Alexander at 1:17 PM