As Organic Food is exposed as a scam, their justification is beginning to sound more and more pathetically illogical. 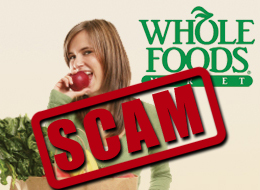 “Organic Food is not healthier than conventional” says a Stanford University research is currently grabbing all the headlines internationally.
The study was undertaken by Stanford University’s Center for Health Policy. The group of physicians who embarked on this study had anticipated that organic foods would be superior were surprised to discover that there was no real measurable difference.
They conducted 17 human studies and 223 studies of nutrient and contaminant levels in unprocessed foods, such as fruits, vegetables, grains, milk, eggs, chicken, pork and meat. They compared health, nutritional and safety characteristics of organic and conventional foods. The results of the study were published in the Annals of Internal Medicine.
The study concluded that the studies showed a lack of strong evidence that organic foods are significantly more nutritious than conventional foods. Consumption of organic foods may reduce exposure to pesticide residues and antibiotic-resistant bacteria, but not by much. Foods with pesticide residue were still under the US Environmental Protection Agency (EPA) standards, and that risk could be eliminated by simple washing the produce before consuming, which consumers should do whether eating organic or conventional.
And this (Standford University) remains one of the several hundred researches that arrived at similar conclusions. The organic food lobby globally and India are fighting back questioning these studies.
Instead of getting drawn into the battle over research methodology, let’s get to brass tacks.

What makes organic farming different? It’s not the use of pesticides, it’s the origin of the pesticides used. What the implications are, Christie Wilcox's in her excellent post: Mythbusting 101: Organic Farming vs Conventional Agriculture summarizes:

"Organic pesticides are those that are derived from natural sources and processed lightly if at all before use. This is different than the current pesticides used by conventional agriculture, which are generally synthetic.

It has been assumed for years that pesticides that occur naturally (in certain plants, for example) are somehow better for us and the environment than those that have been created by man.

But as more research is done into their toxicity, however, this simply isn’t true, either. Many natural pesticides have been found to be potential – or serious – health risks. Leave alone supposedly eco friendliness, even if the organic food you’re eating is from a farm which uses little to no pesticides at all, there is another problem: getting rid of pesticides doesn’t mean your food is free from harmful things. Between 1990 and 2001, tens of thousands fell ill due to foods contaminated with pathogens like E. coli, and many have organic foods to blame. That’s because organic foods tend to have higher levels of potential pathogens."

The claim that organic food being safe is fraudulent is backed by not only by research but the fact that life expectancy almost doubled in India after the Green Revolution.

It is fraudulent because such claims manipulate you into thinking you are buying of something of added value when there is nothing to justify such a value. Consumers are accordingly ripped off paying a premium for value addition that simply does not exist. Such claims are deceitful as it leads to consumers acquiring false information, forming mis-perceptions. It exploits and fans gullibility. By endorsing organic as healthy food you are only advertising your scientific illiteracy. It becomes an outright scam when you make such claims aiming to profit by marketing organic food.

To redress grievances, you can do the following:

a. Complain to ASCI - Advertising Standards Council of India

b. Lodge complain and sue such retailers in Consumer Courts

Posted by Rajan Alexander at 11:16 AM