Indonesia has warned tourists and fishermen to stay from Anak Krakatau after a minor eruption on the volcanic island over the weekend.

The 1,330-foot peak in the Sunda Strait shot volcanic materials and ash up to 400 meters (1,300 feet). Wind carried the dust about 80 kilometers (50 miles) west to Banda Lampung in southern Sumatra.

He called on people living on both sides of the strait nearest the island to stay calm. The warning area is within one kilometer (3/5 miles) of the island.

Anak Krakatau, or "Child of Krakatau," rose from the sea in 1930 due to same tectonic forces that caused the 1883 Krakatau eruption that killed some 36,000 people.

The Northern Hemisphere (North America, Europe,and Asia) experienced a drastic drop in temperatures that created what was later called the “Year without Summer” numerous crops failed and the citizens of many unfortunate countries faced starvation. 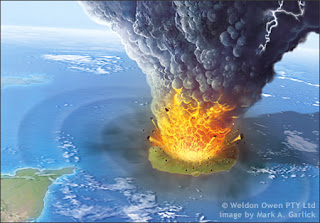 Krakatau exhibited its first stirrings in more than 200 years on May 20, 1883. A German warship passing by reported a seven-mile high cloud of ash and dust over Krakatau. For the next two months, similar explosions would be witnessed by commercial liners and natives on nearby Java and Sumatra. With little to no idea of the impending catastrophe, the local inhabitants greeted the volcanic activity with festive excitement.

On August 26 and August 27, excitement turned to horror as Krakatau literally blew itself apart, setting off a chain of natural disasters that would be felt around the world for years to come. An enormous blast on the afternoon of August 26 destroyed the northern two-thirds of the island.

As it plunged into the Sunda Strait, between the Java Sea and Indian Ocean, the gushing mountain generated a series of pyroclastic flows (fast-moving fluid bodies of molten gas, ash and rock) and monstrous tsunamis that swept over nearby coastlines.

Four more eruptions beginning at 5:30 a.m. the following day proved cataclysmic. The explosions could be heard as far as 3,000 miles away, and ash was propelled to a height of 50 miles. Fine dust from the explosion drifted around the earth, causing spectacular sunsets and forming an atmospheric veil that lowered temperatures worldwide by several degrees.

Of the estimated 36,000 deaths resulting from the eruption, at least 31,000 were caused by the tsunamis created when much of the island fell into the water. The greatest of these waves measured 120 feet high, and washed over nearby islands, stripping away vegetation and carrying people out to sea. Another 4,500 people were scorched to death from the pyroclastic flows that rolled over the sea, stretching as far as 40 miles, according to some sources.

Posted by Rajan Alexander at 10:27 PM